Dawn of Darkness was an excellent RPG/adventure/action game that was dumped by Ward Six Entertainment in 1999. It's not well-known, but it is a real gem, so make sure you play it. Dawn Of Darkness takes place in a long vanished world of mighty forgotten empires and magic. It is the tale of a once revered Lucitanian warlord, Roarke The Merciless, caught between his obligations to his family, his empire and his honor. You are Roarke the Merciless, imprisoned in the captured Manawyd monastary by an army from the Cheitan Empire who have attacked the village you have lived in. Roarke is an elite fighter, if perhaps a little out of practice since his days as one of Lucitan's greatest warlords. You begin playing armed with only the dagger Roarke had hidden in his boot, you must escape and find Sylmaril. How you do this is up to you. The game is played with basically the most of the same controls as Quake 2, except for the new commands and items bindings we've added. Dawn of Darkness...

The files are free, but it is nice that you give Anssi Hyytiäinen credit if you use them for your own game project and release it for the public. I have older DoD files from Anssi Hyytiäinen, former DoD map designer, after talking with him, and was given permition to release the files for the public. Various level parts, test maps, .bsp and .map files, sounds, textures among others, are included... Ben Glover release has different files in it.

I'm done with checking textures, models etc for duplicates, compared to Toadeater dod demo. For example, they are a few terrain textures in Anssi release, which are not in Toadeater demo. In Ben Glover, which i released already, they are terrain textures which are not the same with Anssi. Make a .qrk file if you want with the files that has the same name ,but they are different in content, so you do not have to overwrite other files. If you will find empty folders, is because i didn't delete them, was nothing in them.

In the archive you have .bak file wich is a backup file.

.prt file is a model format it seems, but usualy is made along with the .bsp and you don't need it when you distribute your files.

The .bsp files, can be opened by Quark editor, but the arhitecture (poly) of the .bsp file cannot be modified by Quark.

.map files can be opened and modified in Quark editor.

arghrad.exe is used with Quark for .bsp making of the final level you make, beside other files.

.ico is a DoD icon file

“demos” folder have .dm2 demo files in it, which can be opened by programs that can see Quake 2 demo files. Or play them by ingame console.

“Instead of placing a downloaded demo in the baseq2/demos folder, and typing 'demoname.dm2' in the console without quotes, Demoplay makes it easier to play demos from any location just by doubbleclicking the .dm2 file. Plus it has playback options like fastforward, pause and slowmotion.“

“dod2” folder has many .map files in it and .mrg files, which can be renamed as .map files and thus opened. Not all renamed files work.

“models” folder has folders with models.

“pics” folder has .pcx files which are the buttons that you see ingame and such.

“prefabs” folder has .bru files, a sort of files that has many poly's that makes a prefab, a made object if you will, from poly parts. It can be opened by BSP editor. It can not be opened by Quark, only if you save it first as a .map file with BSP editor.

“save” folder has save files, which are made when you save the game.

“scrnshot” folder has screenshots in it from DoD.

“sound” folder has sounds in it.

“test” folder has various .cfg files for the game.

"texts" files are texts with conversation which are in conjunction with DoD. 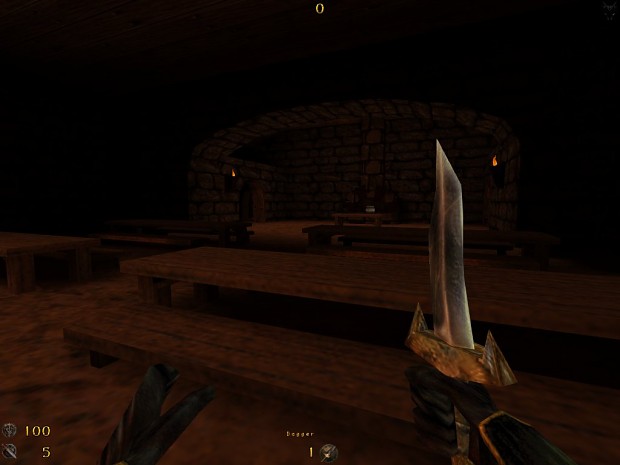 Not all demo files work. Run by typing in the console "map demo1_1.dm2" without the quotes.

Remember everyone, many are parts, tests. But you can learn how a game is made. It is a mod of course, but it is made like a game, with dialogs, textures etc.

Any problems, ask me and EricBoyceU.

Playing around with QuArk Editor... Now!!!