CRIMSON Alert is an unofficial combined expansion/patch for Yuri's Revenge - It retains most of the features of the original game and improves on them. It does not try to be excessively "dark and edgy" or whacky unlike other mods. It includes numerous fixes as well as many graphics and gameplay enhancements. The question it attempts to answer is "What if we still apply the formula for Red Alert 2, but improve upon it?" As such, it features an improved economy, defense, flow, balance, technology, and campaign, while retaining and expanding on the RA2 core we all know and love.

NOTE: UNLIKE MOST MODS
THIS MOD CAN BE PLAYED IN CAMPAIGN!
Revive your memories with fixed, new and improved units and graphics.

Get it now in
Moddb.com

This is basically a "Redder Red Alert" - the working title was "Yuri's Triumph" as it is set in a timeline where Psi Corps and the Soviet Union never split apart, resulting in both keeping some tech from the other side. 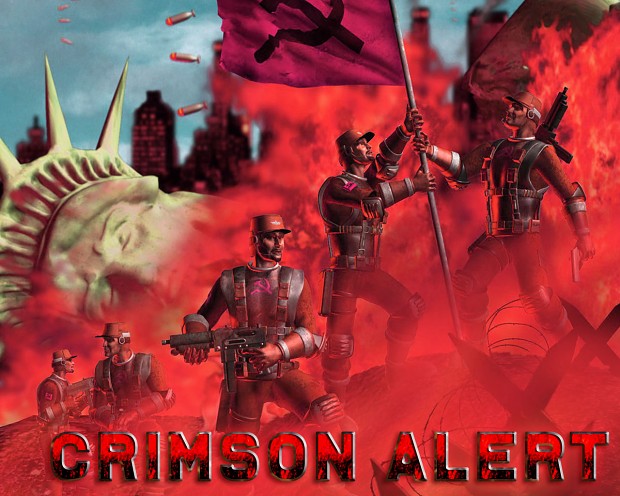 Sides:
- All sides given all specials of their subfactions
(Only three main sides, no subdivisions)
- All sides given Tank Bunkers
- All sides expanded economy
- More structures are capturable
- All superweapons can be built on any number, but this will not give you more countdowns

Veterancy:
- Civilian buildings have Cost in order to provide veterancy, even if unbuildable.
-- The value is dependent on size and significancy of each building, with 300 being the median.

- Added light effects to Conscript and GI attacks
- Modified Initiate fire effects
- Disk Laser is two instead of one. Seems strong, as it actually is. Balance not changed much.

- Sound now comes from flak explosions, not the flak shots

Several changes made to expand on the economic gameplay.

- Construction Yard now provides a basic power level.
- Barracks and Refinery able to be constructed from the start in addition to Power Plant.

- A Yuri player has a fixed refinery, with 5 slaves.
- It comes with a Subterranean Harvester.
-- It's similar to the Chrono Miner in that it drives normally to the gold, then comes back by digging (if the estimated distance is far enough).
(except the first time going to a new field, when it also dives to minerals directly)
-- 20% faster than other harvs, but less HP and it's still unarmed.
-- Can crush all walls due to its drill and dozer.

- Yuri Slave Miner only available from War Factory to player. +1 slave but -25% HP
- Slave Miner does not relocate automatically after setting up, only manually.

- Most occupiable Civlian buildings give a small trickle of cash (about 5% as an Oil Derrick). The battle for the city is now economical as well!

- Power plants are cheaper, but cost money to mantain.
- Soviet Tesla Reactor: -1 every 200 ticks (It's the most "efficient and clean" base power)
- Soviet Nuclear Reactor: -3 every 175 ticks, base cost unchanged.
- Allied Power: -1 every 100 ticks, HP increased slightly, power output increased slightly
- Yuri Bio Reactor: -1 every 150 ticks, power output decreased, infantry power cut by half, can have 5 infantry
(you will now have plenty of leftover building civilians and "freed" infantry from other factions to use as power)
- Civilian Power Plant: -1 every 75 ticks, power output increased, counts as tech prerequisite.

X- Player-built refineries are cheaper and don't come with a harvester, but have workers.
X-- (Harvesters can be built in War Factory if you have a refinery)
- Reversed because it likely created problems with AI attack scripts. Now you have the other refn as an option after the first one.

- Soviet Crane reduces standard building cost by 10% and defense building cost by 5%,
-- but costs 50% more and takes 50% more power.
-- HP halved, armor changed to Steel.
-- Can now sell mechanical units it repairs, like the allied one.

Scoring:
- Buildable units normally have a score equal to 10% their build cost.

- Added Yuri Mental Tank. Heavy tank that requires advanced technology. Main attack is an incendiary ray, much like a buffed up version of the Initiate one. Secondary attack is a wave that flips tanks and ships in one assault.

- Added Allied Tomahawk Launcher. Like a V3 but allied-er (?). Fulfills anti-building artillery now that Prism is no more of that role.

- Soviets have a Gunboat, essentially a tank for water. Can shoot explosive barrels at underwater targets at short range.

- Soviet Dreadnought launches double the missiles
-- Yet the missiles resist half and deal half as much damage as before
-- The missiles launch faster
-- ... but are also more inaccurate

- Aegis has large sensors sight. Plus now you need it to shoot down sub cruiser missiles.
- Diminished number of radial fire segments (3 from 10) so its less OP vs multiple targets.
- Aegis now less OP in AA, but can find submarines better than Destroyer and has torpedoes.

- New Yuri Chaos Drone is now a hovering monstrosity. It is amphibious (faster on water) and fires a Chaos beam. It is built from the Sub Yard.

- Terror Drone is now amphibious and can attack in water, but slightly more expensive

- Soviet Conscripts shoot explosive and incendiary cocktails to vehicles and structures.
-- These bombs are quite good against big buildings, but not so against armored vehicles...

- Apocalypse replaced by Object 279: Amphibious and radiation-resistant, but no AA

- Allied Prism Tank is now better against infantry, but bad against buildings.
-- Prisms tanks are more sturdy
-- They can attack air
-- More expensive
-- Prism attacks no longer go through walls. It's an horizontal light beam. It didn't make sense.

- Allied Radar Control is the ex-Robot Control graphic.
- Separated from the Airstrip, which is on Combat buildings.

- Soviet Kirov Airship HP reduced, armor is light, but double as fast as before (which still isn't much)

- Allied Guardian GI shoots missiles while undeployed, but has lower range, damage and ROF.
-- Guardian GI uses this mode of shooting while in the Battle Fortress, as to not be OP.
-- Guardian GI can now garrison.
-- Cost increased from $400 to $500.

- Soviet Terrorist can disguise, but can't attack infantry directly.
-- Immune to other terrorist explosions
-- Will auto-acquire nearby targets

- Added Yuri Tesla Accumulator - Base defense that replaces psychic towers to players. If overcharged with a Psy Operative, it acts like a magnetron.

- Added Allied Microwave Turret. Fries infantry, detects stealth. In first beta also works as a substitute robot control, but this will probably be removed. Takes up lots of power but is cheap and deals lots of damage.
-- Pillbox removed for human player for overlapping roles.

- Soviet Tesla Coil can now fire to air, but still needs charging. This means most air targets can avoid or escape, like rocketeers and planes.
- Prism tower can also fire to air, with the same disadvantages. It is worse against armor than before, but this is compensated by allies always having Grand Cannon for that.
- Flak turret improved in cost effectiveness.
- Patriot now also more efficient. Shoots four missiles.

Note: The beta has some known unfinished issues as would be expected. This will be fixed in further releases. :
- Cameos aren't final.
- Needs to add more units.
- Airstrike powers pending.
- Paradrop planes change.
- More voxel replacements.


However, the mod is fully playable, and stable as far as tested (no crashes). Maybe it is even campaign compatible.

Adds the system where you get a faction based on a building decision (for now to Soviets and Yuri not full each, planned for all factions) Bugs: - Soviet...

The first beta of Crimson Alert nontheless has many features

Does this mod have a client?

Quick question, great mod btw, so are there only three factions now as all the subfaction units have been combined into one? Or is there still some variation between the countries?

There is only three main factions. Each faction has access to all the subfaction units, and more.
The three factions are currently named:
- New Order (Allied)
- World Soviet
- Reshvavyod (Yuri; these are the three letters on his forehead: Resh, Vav and Yod)

Additionally, this Yuri's Army is where most new units and buildings are headed to, because it didn't have any subfactions to merge.

Well, are you aware of the order of Resh, Vav and Yod?
Originally it should be RTL (i.e. Yod, Vav, Resh) because they're Hebrew letters. corresponding to Y, U and R in English

Hmmm. Good point. I actually know semitic languages are written right to left including arab but hadn't thought about it that way for a transcription of letter. Will correct the faction name.

Yet another mod that will not survive in MO's shadow, pitful. Isn't it.

TF you gotta be so negative for?

Yet another person that doesn't understand there can be more than one mod.
Also fake account that joined today, are you Speeder? hah
PS: This mod is already released so it "survived" ;)

Featuring 550+ AI triggers/scripts, 2500+ ART entries, and a complete overhaul for every individual unit in RULES file, This is INI modding at its finest...

New Horizons is a mod made in tribute to the classic real time strategy game Command & Conquer: Red Alert 2: Yuri's Revenge, originally made by Westwood...

Collapse of the world

The story continue with Allied end of Yuri's Revenge.