We haven't gone yet, and while we aren't ready for the release, we have an update about the status of the mod.

Today we bring you a new update about the status of the Eastern Front mod in Steam. It was a while since the last update, and while we have been busy with our own commitments outside this mod, but we are not dead and we will never be unless you read an announcement from us and you can be sure, if that moment comes you will read about it here firsthand!

Now about the content of the update, it'll be divided in sections to make it easier to read, so let's start:

1. Why the delay on the Steam version?
Besides our other commitments and obligations, we had a problem with our repository and we needed to set up another one, to those unware of that word, it means the place where we used to store the version in development from the mod was nuked so we lost the tool to centralize the changes and to avoid everyone having different changes due to the difficult of merging hundred of files, we stopped development until the server issue was resolved. Of course, since we were already busy to begin with, we delayed some time to set up a new one.

2.- When the Steam version will be released?
We had planned to release it near the current date, however, due to the situation mentioned above, the date is uncertain... however, you can be sure it will be released this year.

3. What about the models needed to replace?
We aren't finished on that, but we are closing the gap.

4. What has been changed on Eastern Front in all these months then?
So far, we have been working tunning the Soviet and Ostheer factions; we haven't made a total rework, so don't worry about having to re-learn how to use both factions. So about the changes:

The changes of the Soviets are subtle compared with the Ostheer ones, because the faction has been worked since long time ago compared to the latter. Soviets don't have new units so far, but they have received a lot of balance changes because of the feedback received in the beta.

We'll work on an updated teching system based on the feedback given from the beta players. Furthermore, the incorporation of Strafniki squads will be different from now - instead of being assault rifle infantry with ppd34 they'll receive SVT rifles.
There will be further tweaks of how the units are accessible in the future aswell as some unit availability switches.

Once the setup is clear we'll give further informations. Right now there's nothing specific.

Ostheer
Due to the feedback received so far, we are changing the Pool mechanic to make it better and also we are restructuring the tech path of the faction. Ostheer still has four advanced structures, however, only three of them produce units the fourth being a support-type building:

We have removed the Infantry Gruppen post, but some of their units were put back in the remaining buildings. We are also considering how to improve the current gameplay with Ostheer, due to their use of pool based assets according to the feedback received from the beta players.

The new building, the Luftwaffe Divisions Quarter, has six plane-based abilities to support the Ostheer commander being half of them reserved to support pool and the other half for assault pool. Some of these abilities are from the Support Army Troops tree, which means we would have to replace them.

The plan we have right now(remember it is not final), is to add one of the reward command trees to replace the Support Army Troops one, and we are discussing about which will be.

There are some new variants of the halftrack planned to be used for Ostheer: 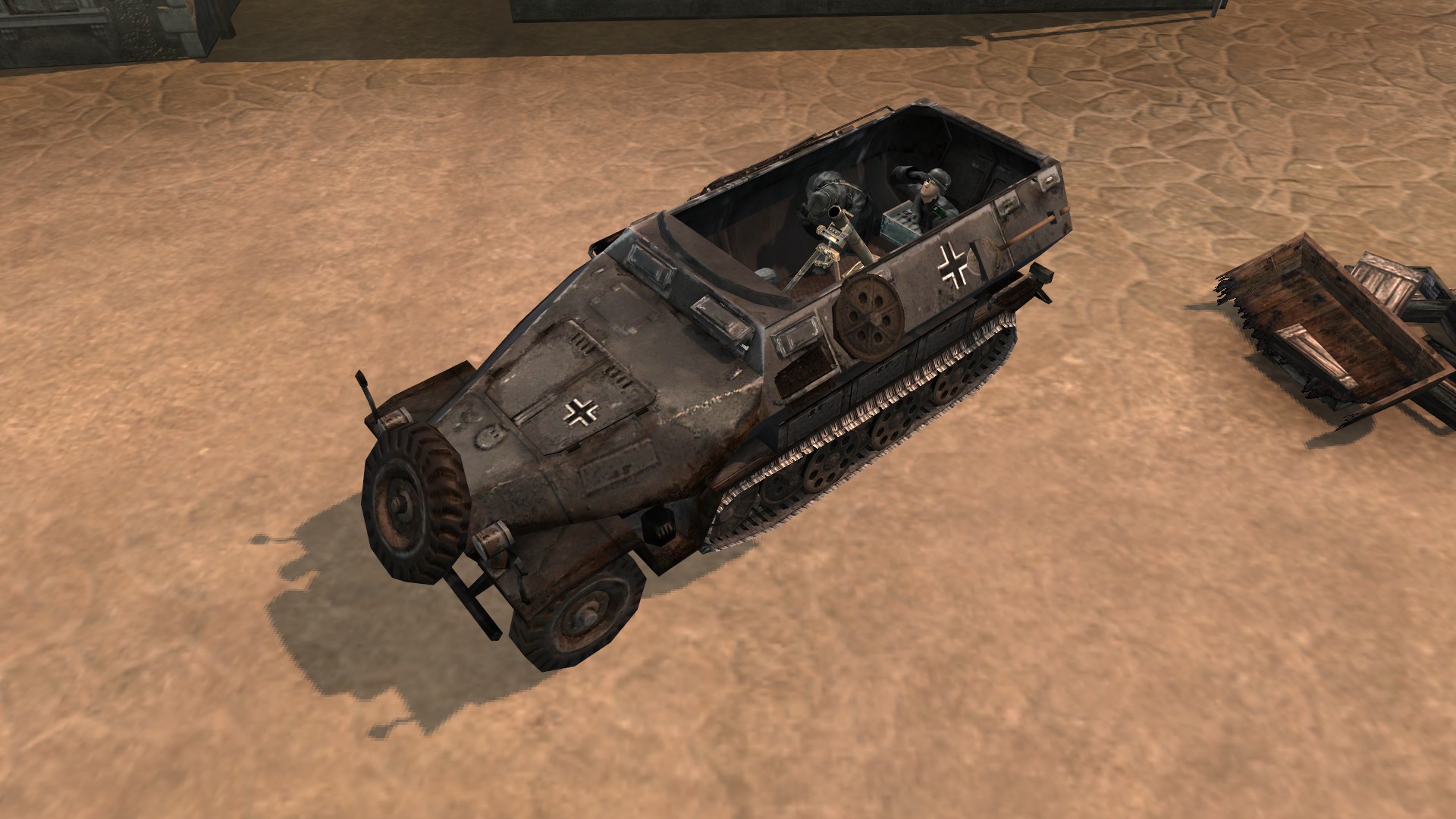 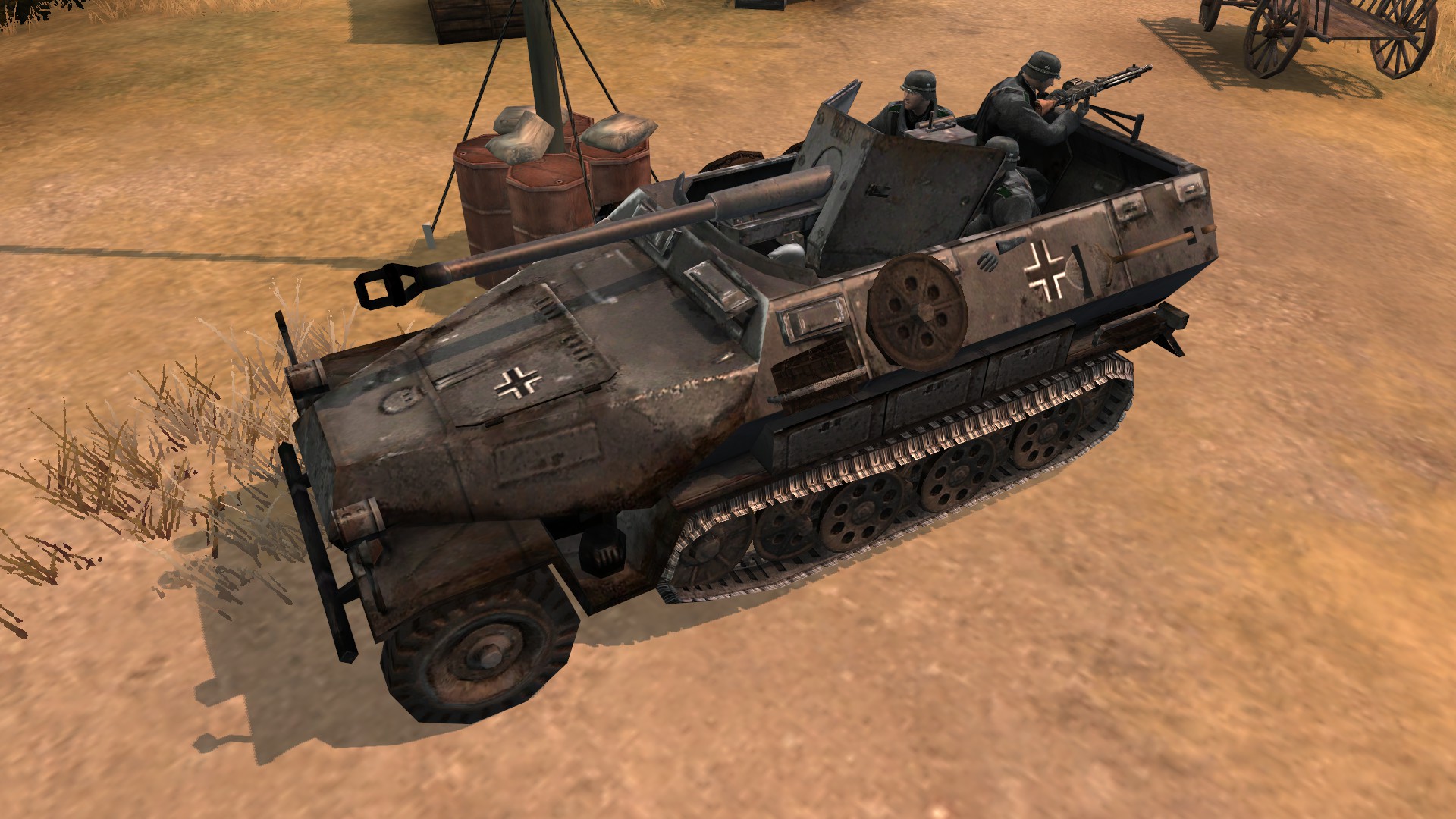 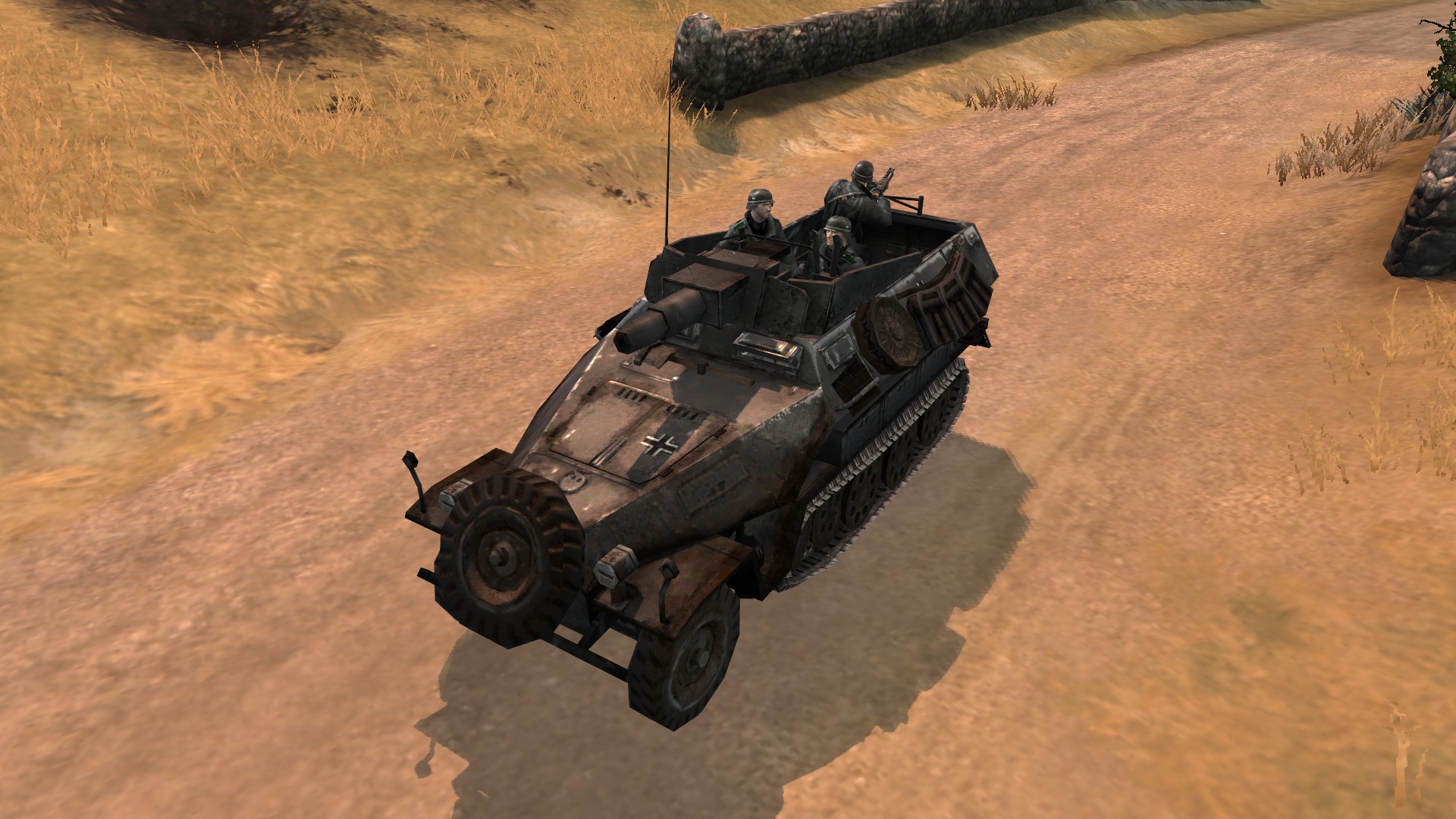 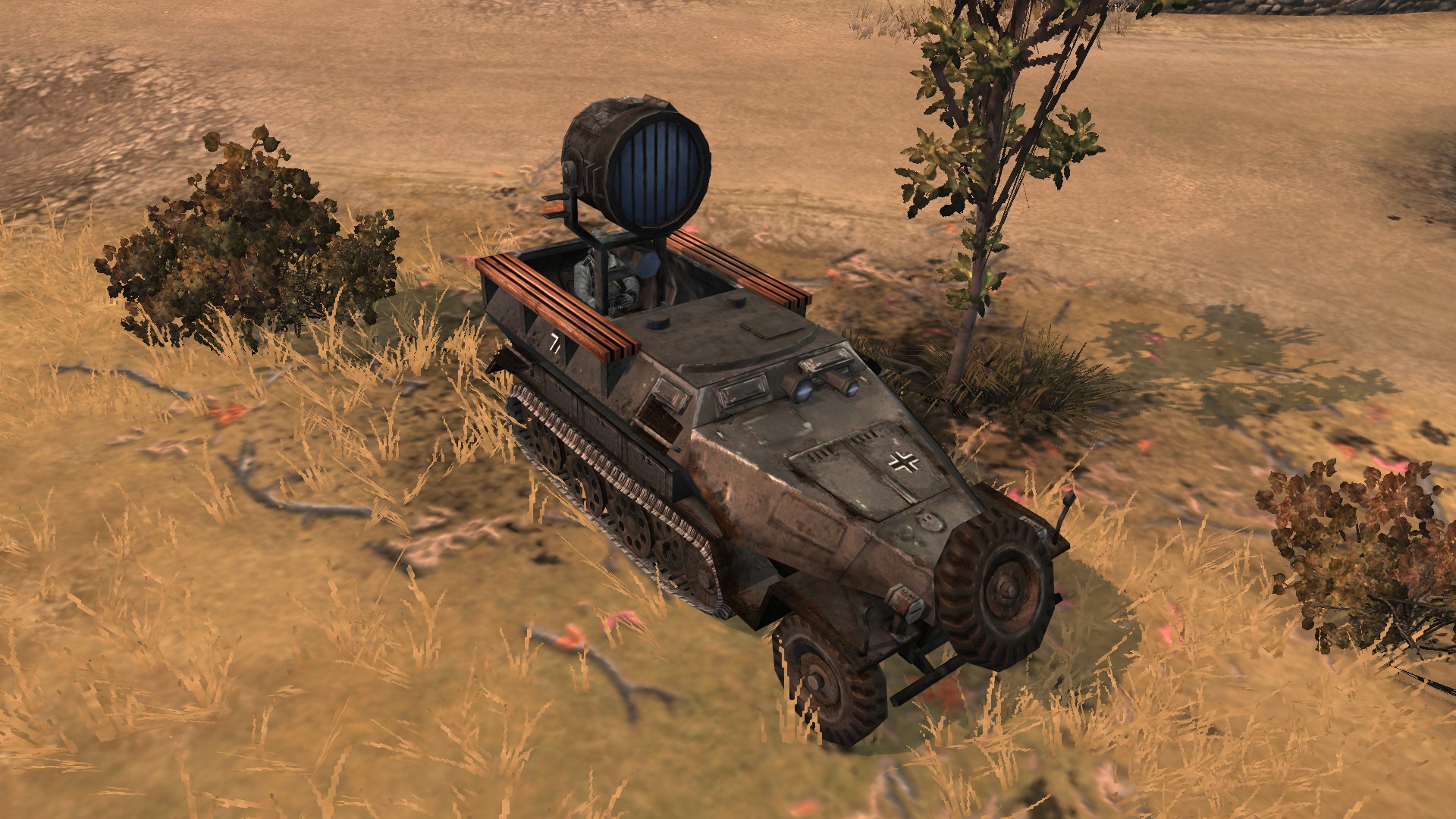 The first three are going to be upgrades from the regular halftrack and we are planning to use the last one as call-in, although it is still WIP.

Furthermore, the pools no longer unlock units and the amount of total units has been reduced to streamline the faction and distinguish each unit from each other. Infantry units receive tweaks to their gear to fit them into their roles better aswell as making them more versatile in the course of the match.

The upgrades are connected to Assault and support pools. For example, Landsers when played in assault pool can upgrade MP40, while in Support Pool they get access to light MG34. Similar adjustments are made for all infantry units available to the Ostheer.

Another unit type that is heavily affected by the pools are now vehicles. The gunner/driver/commander vet system is tweaked, it no longer grants skirts or mg gunners to vehicles. Instead, each tank (StuG III, Panzer III, Panzer IV) receives the option to either upgrade Armour Skirts (Assault Pool) or Periscopes (with Support Pool) which give larger vision and weapon range to the vehicle. MG34 turret gunners are always available to the Ostheer commander.

This would be all for this announcement, but if you have a doubt we can try to answer it in the comment section. As soon as we have all the details ready for both factions, we will let you know about it!

Glad to see you are all still alive and kicking butts. I have one question tho, do you have any plans to expand the skill trees to the level of lets say Blitzkrieg or Europe at War mods? Right now it's so small, you get everything in like 10 minutes and there's not much of a choice.

@Sanguinius
Thanks for your kind words :). Supposing that we are not bound by our oath of not modifying the core rules which govern CoH, the answer would be:

"Unfortunately, we aren't planning to expand the command trees. That would require further balance and we can yet finish the work with regular ones :)."

It would require more work and more units to add which would also increase the memory requirements for the mod.

for my part, i think the EF is already imbalance because of the God of War :( my enemy AIs always use this against me,, and the ground became impassable because of numerous God of War strikes done.. i suggests that the God of War to be removed and replaced by "ingenerys can now construct ML-20 152mm howitzers and 203mm B-4 howitzers"

Excellent! Glad to hear the mod is alive :D

,,Additional doctrine "immediately come to Steam or shortly after release?

@chs94
Sorry but, could you rephrase that?

Just to avoid some sort of misunderstanding in my part.

@chs94
Do you mean that if a reward doctrine will come with the Steam release? If we have time for it, it will be done but at the moment I can't say for sure.

Glad to see that development is still ongoing! Considering the quality standards you guys seem to strive for, it is kind of understandable that delays happen.

If I understood correctly the Army Support doctrine is gone for good, to be replaced by one of the planned ostheer reward trees? Understandable, since it's abilities are being used elsewhere (and units IIRC, the PzII was non doctrinal last time I checked), although I'm probably going to miss the Wespe.

By the way, how good do you have to be at the game to apply for a beta tester position? I've been following the mod for a long time and would like to help, but I'm afraid I haven't played mutliplayer in almost 2 years.

@capitanloco6
Don't worry, Wespe is still used, I think it was moved to the Fortress Command Tree, I don't remember clearly.

Regarding the Beta testing, look for Hendrik (aka Darc) in our forums, he is the one that handles that process :).

So happy to hear from you guys again! Been plying Eastern Front since Beta :) and still the only game that never get uninstalled due to your mod and Europe at War Mod :D

Good to hear :D Any word on if there's gonna be another great patriotic war? :D

@wardog2
We planned to make another one almost a couple of years ago, but we couldn't. We have almost finished the preparations though, so if it would be done again we would almost have what we need.

Okay cool, I hope you have another because the first one was super fun. :D

thank you bros, i love this mod

please add the 280mm B-4 howitzer. its fine if it is a reward unit and only one can only be constructed at a time.