City Rebellion is an episodic mod intended to have the player take on the role of one of the citizens of a city dominated by the Combine.

Chapter 1: The player plays as an unnamed character who is assigned the task of operating an observation outpost in an abandoned warehouse. The level picks up just as the player is messaged by a character named "CHandler", alerting them that the outpost has been discovered, and a Combine raid is minutes away.

Chapter 2: The player, having escaped the Combine raid heads over to the underground rebel base until the Combine manages to find the base and attacks again.

The first two of five chapters have been released. Work has begun on chapter three.

*NOTE: While the first release (Chapter 1 aka Version 1) is still available for download, Release 2 contains both the first and second chapters. Thus, only Release 2 is required if you want to play both.

A few days later than I intended, but here's that screenshot I promised of Chapter 3! 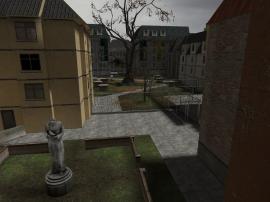 I'm please to announce release 2 has been completed and is ready for download. It features: - New voice work - Three new levels - Exciting fights...

Things are progressing pretty well. - There will be three new maps for release 2, totaling an hour or more of gameplay. - Retextured hands. - New voice...

I've just posted a picture of the new skin for player's hands. This will be released in v2 some time soon. Head on over to the gallery to check...

I'm hard at work on the second release. The release will contain two, possibly three maps (to get best performance). There will be more NPC interaction...

This is the complete set of files for City Rebellion Release 2. This will replace the original release in addition to brand new maps.

This is the zip version of the mod.

Right after you escape down the hatch and it loads this bitch stood in my way and i can't advance.

I have noticed a few bugs and it is preventing me from going further in the game. It should be updated. It's those .vcd files that are missing in the directory even though they're not.

I agree with an earlier comment about how the architecture is too blocky. Also, I didn't get any of the scenes so I had to noclip past each part. I also didn't like having to wait for non-voiced scenes to finish, such as the time spent in the infirmary as the combine attacked the base. I had no idea what I was supposed to do because I assumed I had to do something. The zombies in the sewers were strategically placed but I think you should have used the other zombies more instead of just the normal ones.

I liked it a lot. The review I wrote for this game was too long to post in the comment section, so I put it on the blog in my account, if the author or anyone else interested would like to read it.

To perk interest; I thought the game was extremely good. I voted 10/10.

you should say what u dislike.

in my opinion it's too blocky,and too empty..
look at Valve's arcitecture and try to repeat their style of mapping.
add more details,work at lighting