Thanks for voting and helping Blood Omnicide on it's quest to become the 2022 Mod of the Year. You are now in with a chance to score some free games from our #modlove collection. Help this mod secure more votes by embedding the widget (or link) we have included below on your favorite sites.

Some of you might know that Ben Lincoln, the creator of thelostworlds.net, did a research called Map Survey. Inspired by the discovery of the secret BO location with a pirate ship, he tried to seek each level of the game for other previously unknown location. He also explains the rules of location storage in BO, the connection between the map’s number and section...

Some of you might know that Ben Lincoln, the creator of thelostworlds.net, did a research called Map Survey. Inspired by the discovery of the secret BO location with a pirate ship, he tried to seek each level of the game for other previously unknown location. He also explains the rules of location storage in BO, the connection between the map’s number and section. Thanks to his work the tile texture compression format was known, as well as .cmp files format, which created an opportunity to research the structure of the maps. Continuing his work we spent two weeks to investigate CMP files with a HEX-editor. As a result we acquired almost fully explored program structure of the maps in Blood Omen.
New 1.0 version of Blood Pill utility is capable to read files of BO locations and export them as pictures, showing optionally not only layout of the locations, but much of the information hidden to the eyes as well, such as numbers of the phrases spoken by characters, scripts for buttons, places available to travel through in mist form, location exits etc. Previously to acquire such information we needed to make long and exhausting measurements, taking lots of screenshots and combining it all manually.
Using this specifications it is possible now to create BO level editor to make new locations in addition to existing ones. 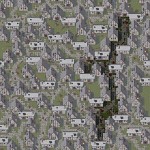 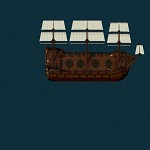 Here are some curious facts found out as a result of format research.

1. In Ziegsturl the bandit leader who finishes off Kain is located in the north-east of the map and teleports to the action place right to the start of the murder scene.
2. In the same location there are a camp fire (approximately in the place where later you can find a large bunch of bandits) and a wooden beer mug sign on the tavern, which disappear when Kain returns to Ziegsturl as a vampire.
3. The entrance to the H.M.C.S. Bitter secret location is blocked with a door with assigned trigger number. However a button to open it doesn’t exist anywhere in Blood Omen. Probably the developers cut the location with it, or simply forgot to place this button. There is a small chance that this door unlocks after executing some specified sequence of actions (just like the door to the spirit forge which trades the Heart of Darkness items). Nevertheless it is certain that the entrance to this location is placed there on purpose.
4. A single Blood Omen level can be placed on an image a size of 2560x2560 pixels (20 mb), in the original format it is about 100-300 kb. All locations can be placed on a texture a size of 61440x61440 pixels.
5. All Blood Omen resources (except videos) unpacked in standard RGB images are about 4 GB.
6. In one Blood Omen location there can’t be more than 50 items (and more than 4 different kinds of items), 32 mobs, 20 buttons, 100 tiles that change their looks (a door is 2 to 6 tiles), 256 dynamic objects (chests, stones), 8 types of these objects (for example, gray and brown stones are different kinds) and so on.
7. Alongside with water, lava and ice there is swamp zone in the structure of passability. It is known, that the blood fountain that gives player invulnerability to swamps was cut from tha game.
8. You can notice that all open ground locations can be divided in 2 kinds judging by the level of detail of rocks and cliffs. As an example of the high detail you can look at the Oracles mountains (map 1 section 43), the edges of cliffs there are pretty complicated. Willendorf suburbs (map 1 section 68) or the scorched village in the Dark Eden (map 1 section 14) show more simplified and rough mountain line. It is curious that the locations become more simplified in the latter part of the game, and it was about the time when Crystal Dynamics joined to development. The pirate ship location is the “rough” type too. However it can be a mere coincidence.
9. There are 8 spirit forges in the game, according to the quantity of items. However in pill.big there are 10, and the extra 2 are copies of the Pentalich of Tarot forge.

The discovery of map format lightens the last dark spot in the pill.big contents. There are no more unknown files, so the evolution of the Blood Pill utility is complete. The further updates are likely to be mere bug fixes and graphic adjustments.

I remember this, there was like "Blood Omens 100 secrets" people used to go on about.

Still some hidden, I hear.

I hope that with Blood Omnicide the "100 secrets" as well as the cut out content (like the ship)will be there. Keep up the good work guys. Can't wait.

Do you know where I could purchase the old game ?