Hello guys,
I thought its time to upload some more pictures to show this mod isnt dead. In the last weeks work has begun on the Australia rework and so today I want to show you its reworked fascist branch.
At first heres a general overview of the focus tree for AST. As you can see I expanded the fascism branch a little bit to improve the immersion and plausability.

So lets go into detail: 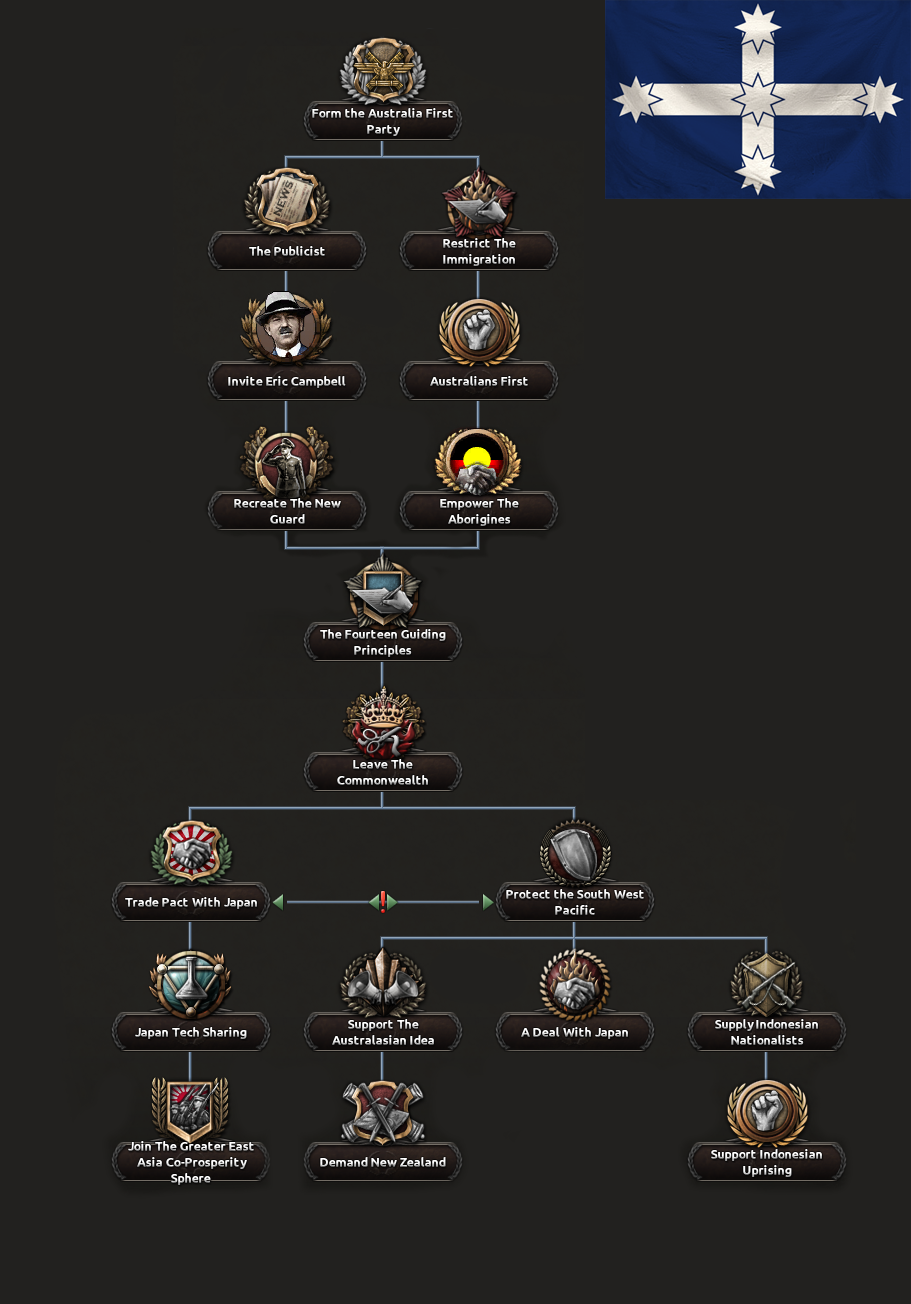 At the beginning like in vanilla the Centre Party led by Eric Campbell represents the fascist party of Australia. But in reality this party existed just in New South Wales and suffered a horrible defeat at the 1935 state elections. After this dissaster Campbell withdrew from public life and the party which became insignificance.But then there was the Australia First Movement, which was quite popular at this time. As the name suggests it was never a party, but the creation of the Australian First Party (AFP) got a lot discussed in 1935.Once you decided to support the movement, the Centre Party gets replaced by the AFP and the first party meeting can beginn to determine its leader. The movement had many main figures so its up to you who should lead it. 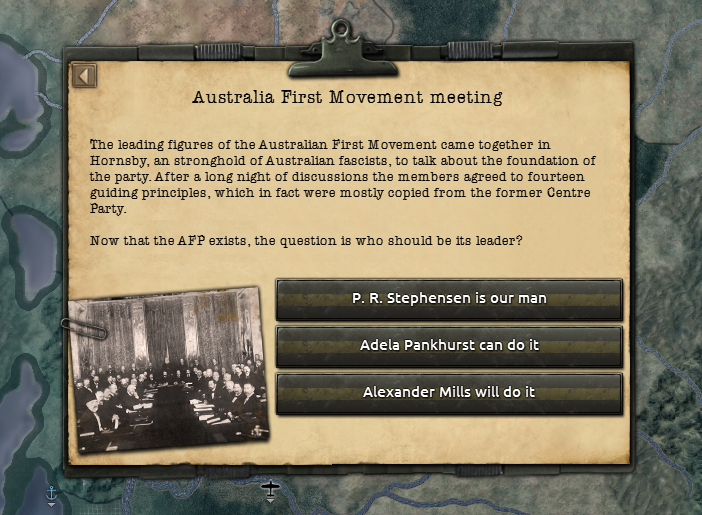 The left side of the tree is to build up your support among the people of Australia and the right side gets unlocked after you have enough support to enact laws and decrets.
The final step before your independe is to leave the commonwealth. This of course wont make the UK happy, so choose the time wisely. If its too early the Commonwealth can decide to take measures to force you back into its ranks.

Then your free to choose what you will do. Either you stay on your own or you do what the actual goal of the AFM was, to forge an alliance with Japan and fight the allies.

Since im from Germany I couldnt resist to create it. In case you somehow own or puppet AST as GER you can activate a decision which triggers this event: 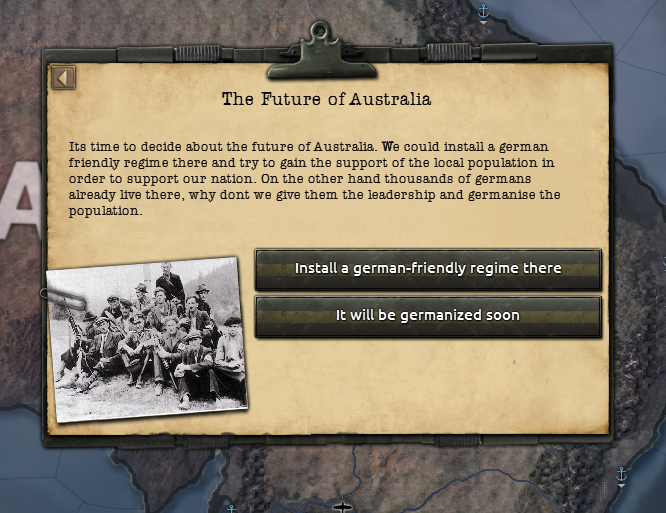 A german friendly regime consists of the AFP or Centre Party, up to which path AST was going. The RK will be lead by Rudolf Asmis, head of the NSDAP (OA) in Australia. 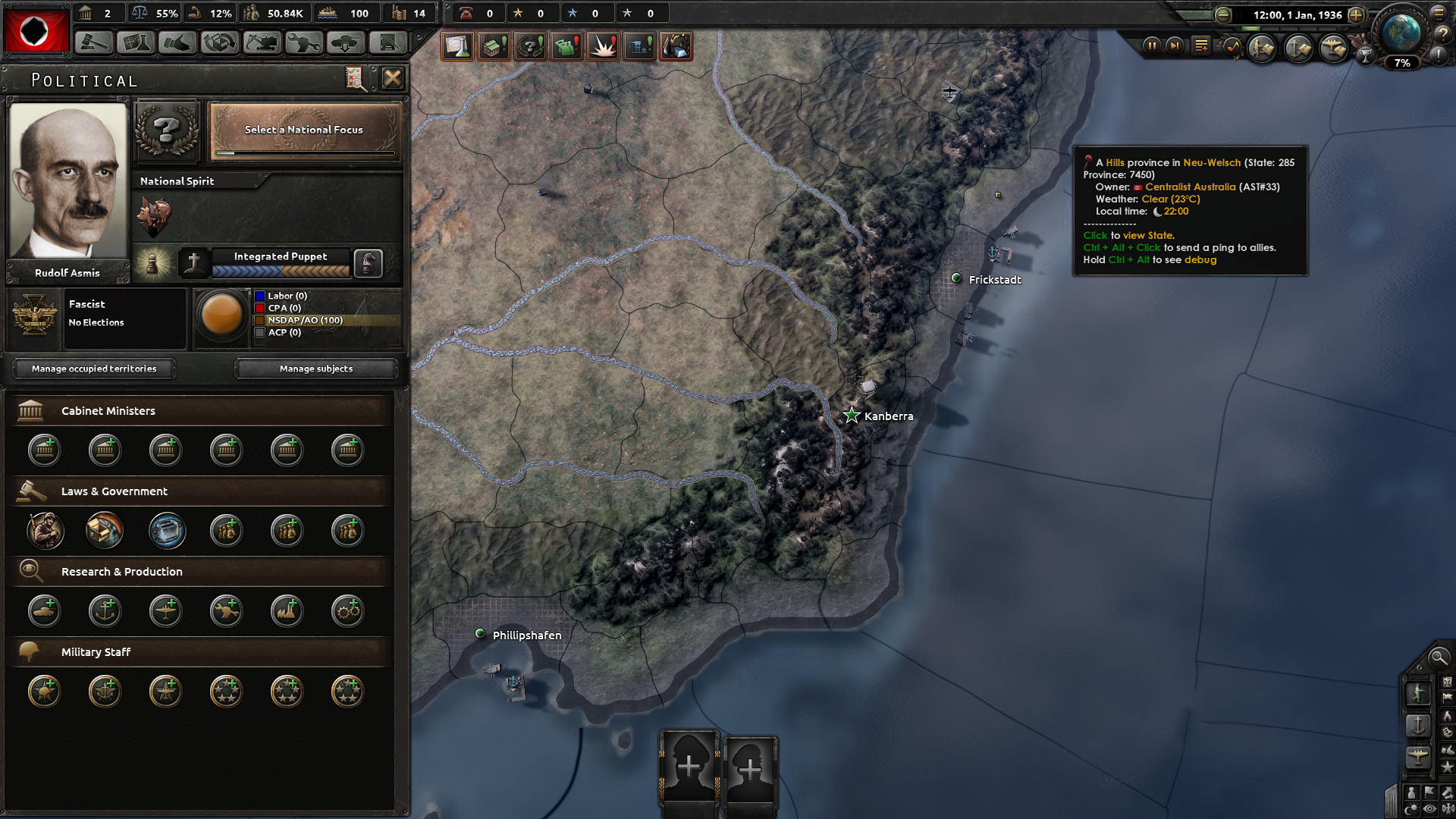 This was it with Fascist Australia today. Im thinking of also creating a Japanese puppet option or a german puppet focus tree. Of course everything is still WIP and can change. Stay tuned for the next update!

Edit: I also have discord now, so be the first to join me there: Discord.gg

Time for a new update, this one will rework Hungary and improve the mod itself.

A completely new focus tree and much more awaits you in 0.34 ;)

If you're interested in helping me make this mod then now is the time! Further informations below...

Reworked version of the mod. Not savegame compatible like all other updates.

New 3d models, reworked china (again), equipment names for most european countries (and its icons) and many minor fixes and tweaks awaits you. PS: Turkish...

Updated to version 1.2 of vanilla game and included the mod 'More Variants' by GaGa and also the new Greek focus tree together with the two new countries...

New update contains a complete rework of the syrian region and more bugfixes.

so are you going to upload the newst version of the mod here?

Am I only one that get game crash after the fall of Soviet Union? And is this mod going to be any more developed, it's great for playing?

The mod is dead?

It's not, just not updated here for an while. On steam it gives like every month an new update

is this mod dead ? i really hope its not tho

It's not. I reworked it recently and on steam the new update is still out

I gues this weekend it should be ready.