Bannerlord Online not only provides a multiplayer experience but provides a complete sandbox experience that is as close to the original as possible.

Mod is available for download! The installer can be downloaded from the link or in the attachment.

Links to connect to our Discord server and download the mod:

Every squad, battle, bandit hideouts and other events are fully synchronized.

Time doesn't stop during battles - move around the world, visit cities, trade and fight in the arena while other players participate in battles.

Join existing battles to turn the tide of battle.

Starting to play as an unknown character, you will gradually find allies and opponents in this world.

However, each hero now has a real player behind it, not a scripted AI.

Unique perks specially designed for multiplayer, as well as a redesigned experience bar for each skill.

The players themselves produce raw materials and deliver them to the workshops while working in the villages.

Workshop owners produce food, weapons and armor, and then deliver a finished product to the market.

The finished product is in demand by military units and serves as an aid in military campaigns.

Team up in caravans with other players for effective trading

You can always find goods on the market that should be delivered to another settlement.

You can equip the caravan alone, but it's safer and more fun to do it with your friends!

Of course, the combat system!

The game cannot be imagined without battles! Now there is support for 100x100 battles, and in the future, the limit will increase to 200x200!

Almost all weapons that are in the original game are supported.

Fight in the arena in cities or engage in real, bloody battles!

We have released an update in which we have added a new retreat mechanic.

Now it will be much easier to avoid unwanted battles and save both your army and time.

You will now be able to retreat from the battlefield (2 times per hour).

Retreats can be initiated by opening the Scoreboard in battle (Tab key) and pressing the appropriate button.

If you have more than one player in your team, each team member must press the button to confirm the retreat.

Once you have reached your limit of 2 retreats in one hour, you (and your team) will be affected for one hour, prohibiting you and your team from retreating from the battlefield.

The effect can be seen at the bottom right of the global map. 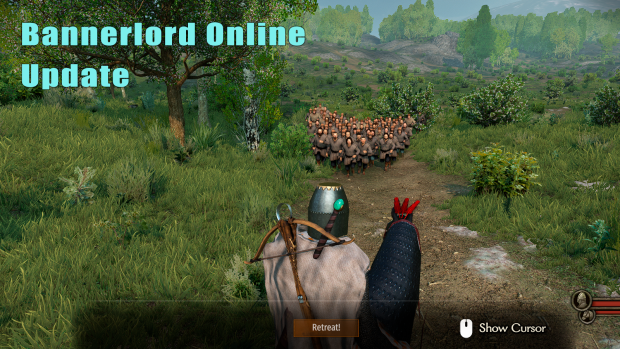 Dear players!We would like to share some details about the upcoming clan update coming this fall.The main feature that awaits you is the addition of a...

Welcome to the Editor's Choice awards for the 2021 Mod of the Year Awards, where we show recognition to the mods from the past year that we've found to...

Using the launcher, you can update the mod to the current version and log into the Bannerlord Online servers with your account. Now supports Windows 7...

Is it possible to add a mode where we can create our own servers? Basically to make a co-op server? Have been dying to have this game and it's predecessors in a controlled co-op setting.

Can you host a private server?

when i try to start it a message pops up saying mod isnt updated
how do i fix ?

sorry but is this co-op?
I hope so.

I'm gonna give this a solid 7, with the potential to raise it later as the mod progresses. As of right now the mod is little more than a proof of concept. If you go into this expecting a fully playable multiplayer experience of the single-player sandbox, you're setting yourself up in disappointment. There isn't much to be had in terms of content at the time of this review. However, the framework alone is worth a 7. It's unbelievably impressive that the devs managed to create a multiplayer version…