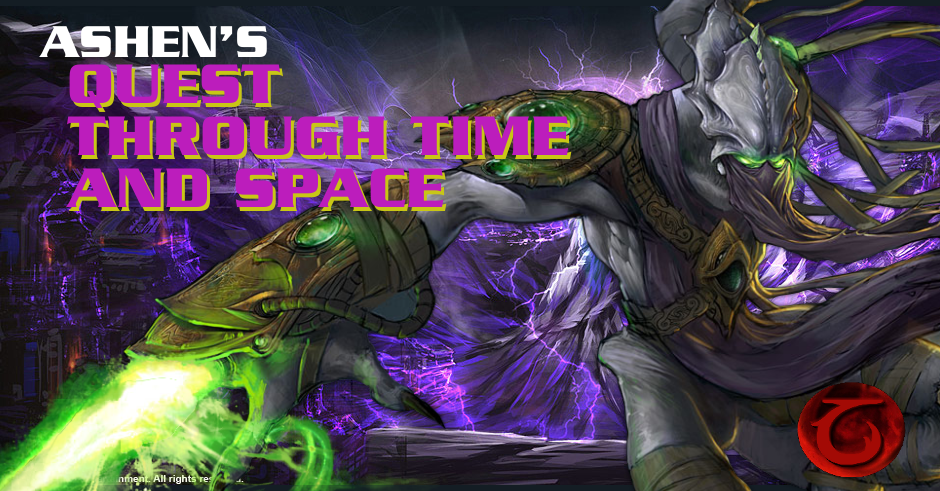 Dubbing the planet Devil's Retreat, they gather resources and set up bases, planning to make the world their new permanent home, as their original homeworld of Thalanduras was destroyed by the Zerg. However, Ashen does not rest easy. He still wishes to contact Adun and learn why he abandoned them on Thalanduras, but has no idea of how to do such a thing.

Ashen steps away from the base for a smoke break, but before he can get comfortable, a distant voice beckons him to the southern mountain range...

What will Ashen discover?

Find out in... Ashen's Quest through Time and Space!

Thanks for voting and helping Ashen's Quest through Time and Space on it's quest to become the 2021 Mod of the Year. You are now in with a chance to score some free games from our #modlove collection. Help this mod secure more votes by embedding the widget (or link) we have included below on your favorite sites.

We at Crescendo want to commemorate the year since AQ's release, and we figure there's no better way to celebrate than to update the project and fix some of its longstanding (although minor and rare) issues! You can read up on the full patch notes in the features section, but to summarise; all maps boast a more consistent presentation in their briefings, some exploits have been fixed (most notably in map four), and an additional scene has been added to map five.

The bewildering story of an estranged Dark Templar.

The patch notes for AQ's anniversary update are here!

I'll give it a try. Hopefully it doesn'trequire an exe or something so I can play on windowed mode.

You can try to play it without an exe - as far as I remember, the exe only changes portraits and sound files. You'll be missing out on part of the experience, but it should (presumably) be playable.

thanks for the input

Very nice work guys, had a lot of fun with this one. It's great to see new projects are still being made for BW. Also, kudos for putting my recordings to good use!

Thanks for the props!

"Also, kudos for putting my recordings to good use!"

Your recordings? Are you Laconius??

You guys actually worked and finished something... All this time I thought you were dead. Good show, looks like I'm gonna be pretty busy this weekend...

Hope you enjoy it. We wasted many months on it.

Feel free to leave us a review. We'd have posted it on CC, but Lavarinth doesn't want any content related to me on the forum. Happy playing!