Not far from their peaceful, isolated village, a group of brave hunters keep watch overnight after a grueling day's hunt. Aside from the sounds of the nocturnal creatures of the marsh and the hunters' own breathing, all is relatively peaceful. Suddenly, from out of nowhere comes a frantic, exhausted looking old man. The peacefulness has ended, and an epic struggle is about to begin.

Welcome to "Age of Mythology: Acid Spewing Freaks", the epic story of a handful of brave warriors who risked everything to stop a world threatening menace before it could destroy humanity. Jax, the mighty hunter turned warrior. Antonia, warrior princess and magical healer. Soter, the brave and powerful wise man. Join them on their perilous journey through untold dangers in their quest to discover and destroy their newest and greatest enemy...the acid spewing freaks!

"Acid Spewing Freaks" is a campaign that utilizes all original materials from AOM: The Titans expansion. In other words, there are no updated character models or textures, I've just made the best use I could of what was there to begin with.

When a peaceful village is bombarded with meteors and overrun by slimy, acid puking, tentacled monsters, you'd think things couldn't get any worse...but don't be fooled...this is just the beginning! The beginning of AOM: ACID SPEWING FREAKS!

Acid Spewing Freaks is a campaign designed for Age of Mythology: The Titans. It features 7 playable scenarios plus cinematic-only prologue and epilogue files. The game has a sort of linear RPG/MMOish feel to it, while still retaining some of the best elements of the RTS of Age of Mythology. So grab your swords, spears, and whatever weapons of destruction you can find, and get ready to butt heads with ACID SPEWING FREAKS! 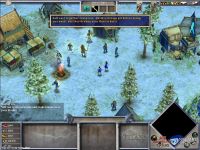 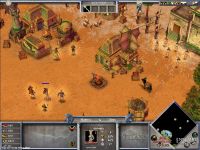 As a Taiidan Emperor I approve this campaign

Since you asked...here's the synopsis for the planned sequel...there is only one freak in it, and he plays an unexpected role... The freaks are pretty much defeated by the end of the this first campaign though.

0 - Prologue (or "I Ain't got No Body"): When we last left Seamus Wormdung, he was in hell after the events of Acid Spewing Freaks. Oh, well. That's just a minor setback for a villain of his calibre.

1 - Invasion - An angelic messenger warns Jason and Biggs of an invasion from the North preparing to destroy their peaceful village. Will their small band of local defenders be enough to destroy the hardened invaders?.

3 - Holy War - Jax, Azton, and an unexpected new ally journey North to further investigate the "cult". On their way, they meet a brotherhood of priests standing against the cult and a deadly threat about to be unleashed.

4 - Wretched Lands - The priests Jax helped have provided a fighting force gathered from the allied regions. Jax and his friends must lead the army in a head on clash with the well armed cultist forces if they are to discover the source of the evil.

5 - Revelation - Motaro, chief lieutenant of the cultist forces, reveals the startling nature of the cult leader, as well as their base of operation. Jax returns to his home town to help them form a powerful military - they will need it for the epic confrontation ahead of them.

6 - Into the Fire - The enemy has been destroyed, but not entirely. The heroes must pursue their nemesis into the underworld, where events will take an unexpected turn for the worse..

Are you going to have a short/great war of some sort? like a war to end the freaks for good or something like that:-P

Right now, I have plans for what each scenario will entail as well as what the cinematics for each will contain (not word for word yet, but the story is fleshed out in my head). It's just a matter now of figuring out which characters/enemies specifically I want to use. Obviously, the surviving hero characters from Acid Spewing Freaks will be making a comeback...

Cool.. btw, if you need a concept artist for your planned sequel, I could do that:P

Thanks. I'm afraid I'm just sticking to the units available in AOM and the Titans expansion for now. I tried to use them in creative ways and use a variety of them, but as of now, it's just the original units found in those two games.

I have a sequel all planned out that will follow up the events of this mod. Perhaps I can incorporate some new units into it if things work out.

seems lika a cool mod, but are you gonna add some new units?

I forgot to mention that this mod requires the TItans expansion.