An ancient historical RTS for Warcraft III: The Frozen Throne. The first beta is released featuring 5 civilizations: Romans, Carthaginians, Athenians, Spartans and Macedonians. There are 3 more to come: Persians, Celts and Scythians. I am looking for people to contribute (or form a team) with mostly minor modeling/skinning tweaks (major are welcome as well) but anything from triggering/terraining better than mine to suggestions or playtesting is welcome.

Thanks for voting and helping Ancient Empires on it's quest to become the 2021 Mod of the Year. You are now in with a chance to score some free games from our #modlove collection. Help this mod secure more votes by embedding the widget (or link) we have included below on your favorite sites.

To install simply un-zip and put the map file in your WC3 maps folder or any sub-folder of your choice.
If someone wants to play (I'm on EU battlenet) pm and I will If I'm around.

Features:
- 8 playable civs, 5 are ready (Romans, Spartans, Athenians, Carthaginians
and Macedonians) and 3 more to come (Persians, Celts, Scythians).
- AI for all playable civs.
- Increased focus on economy and overall room for more playstyles, with turtling,
rushing, expansion, booming etc all being viable options.
- New armor system similar to the one in Age of Empires II.
- (Mostly) Soft counters representing realistic unit functions and strengths/weaknesses.
- Units ranking up by killing enemies.
- A huge range of technologies, both shared and civ-specific.
- Naval Combat serving the purpose of capturing fishing regions, which reduce
the need for housing and can keep increasing the food cap after the farm
limit is reached.
- Randomized neutral buildings and creeps adding more variety to each match.
- Capturable animals serving as an easy but fragile food boost or allowing the
construction of stables without imports at the market.
- Many game modes.

SPARTANS:
Spearmen get +3 damage/+30 Hit Points and get limited to 1 per Farm.
Main upgrades give bonuses to infantry, slaves and skirmishers.

ATHENIANS:
Workers get +1 gold capacity but starting gold is reduced by 50.
Workers, Militia and buildings get +15% hit points. Each
Athenian-specific Academy tech and each Phase researched grants one or
two free Philosophers units. Main upgrades give bonuses to ranged units,
navy and structures.

MACEDONIANS:
Stable units and Skirmishers get +1 damage and +10% movement speed. 3 Successor faction
options with various bonuses each are unlocked for the Imperial Phase.

To avoid a bug with no solutions found even by experienced triggerers who
checked the map, player count is reduced to 4 and map size is reduced as
well. The lag/crash issue seems to have disappeared since that change.
Map layout is changed as well and many of the game modes are
implemented. 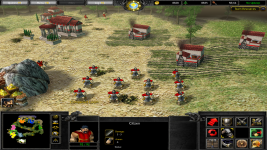 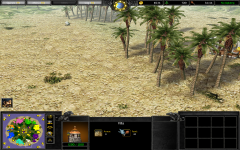 In the past few months I've redone almost everything on how the map works. Before any early release though, I'd love to test it with real players. Anyone...

Looking For A Modeler

One (or more) people joining to form a team or just helping out would greatly enhance the map visuals without very demanding effort.

While I would like to use a more Age Of Empires-like gather system, WC3 doesn't have the capacity. So how will it work?

The Scythians field powerful cavalry and archers. They have the weakest and faster to build structures, which also can pack on horseback and redeploy.

It's been a while, but here's a minor update. To install simply un-zip and put the map file in your WC3 maps folder or any sub-folder of your choice...

The map is at a playable state with a working AI on all difficulties, including 5 Civs: Athenians, Carthaginians, Macedonians (with 3 successor sub-factions...

Two simple songs I composed trying for a first Age Of Empires feeling. They turned out a bit darker (especially the one of them) but still I'll probably...

When will you update the map?

this mod is dead?

Well I just have tried it and it is really, really good. I am trying myself on W3 since longer time but I hae never created something that is so good. Is there maybe a file where I can see into your source code, because I would like to learn from your work? :)
Misterich

Thanks! My triggers aren't the best, and most of the complicated ones are done/edited by others, but you can pm me for an unprotected version if you still want it:)

I've fixed my ports and can now host on B.net for easier playtesting. You can now add me as AncientEmpires in the European server.

So creative. Even made soundtracks. Good luck.

Thanks for the feedback:)

I'll have to disagree with most of it though, mostly due to my vision on what the mod should/can be.

Since most of the tech-tree is shared, you'll see empty spaces in the buildings' interface for civs lacking some unit or upgrade. This works like in early AOE games, not the Warcraft 3 way. Not perfect visually in all cases, but better than needlessly cloning every unit and upgrade for each Civ and having much more work on rebalancing.

I wouldn't add fictional or out of timeframe/civ rooster units such as the ones you suggested (Stratiotai were medieval cavalry, Companions were Macedonian/Diadochi units, not Athenian or Spartan and the Macedonians "get them" as better heavy cavalry). There's also an issue with adding more units: the lack of models, so I've gone with somewhat generic and limited choices for many units. Keep in mind unit roles as well. In a classic RTS setting it's pointless to have two units of the same function for the same Civ.

Techs are quite many as it is, but I'm open to any ideas that might prove useful. Unit balance might not be perfect, but imo it isn't bad for a beta release worked on by one person. Sure many things can get improved in general but this would mean extra time which I currently lack. Not sure when the next update will come.