Harold Mason, he is just an ordinary man that lives in the suburbs. Nothing was more peaceful than living in such an area...until he visited a gift shop. It was a cold, muggy evening, and he needed somewhere to go inside. He stumbled across a place called, "Eden's Collectables," that choice to warm up, would doom him. He had browsed around the shop just to pass some time, then he saw the most fabulous model house he had ever seen. Without hesitation he purchased it, he had a fancy for novelties, so it was no guess he would buy something in the store, he had the biggest smile on his face when it became his own possession, but that smile would soon be inverted when he discovers the truth of what horrors the house holds, the creature that inhabits those halls, would soon spill into the real world to haunt Harold into a downward cataclysm.

Ten years had passed and the model home had been passed down to a new owner by the name of Ryan Finch. Unsuspecting, Ryan would endure the same nightmares the house inflicted upon Harold. Only one question remains in this epic conclusion to the series, what will be in store for Ryan and what will he do to escape the clutches of the house, if he ever will be able to escape that is of course. The entity that roams the halls in the dream mansion is back in an attempt claim a new victim, will Ryan succumb to the pressure, or will he make a final stand? 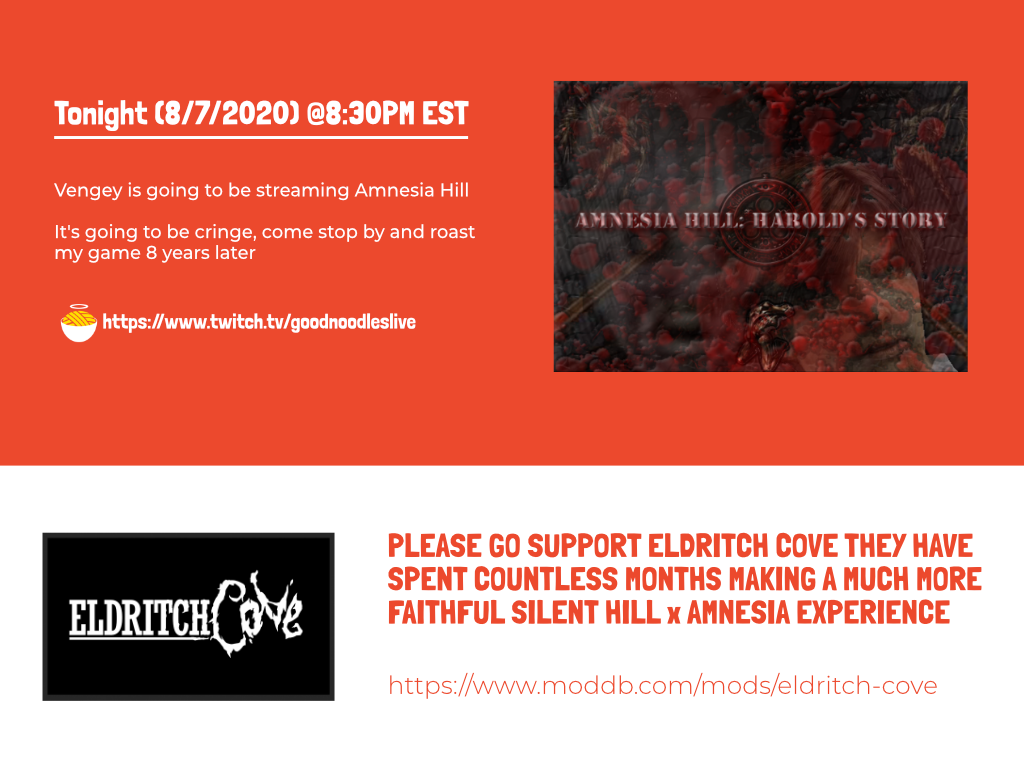 This is a last minute announcement, but I wanted to get the word out there. Tonight at 8:30pm EST I will be streaming myself going back through Amnesia Hill. Cringing and all the like. Come join me come roast me.

With the announcement out of the way, I want to direct all of you fine people to Eldritch Cove. An Amnesia mod much MUCH more deserving of the title of a "Silent Hill" x "Amnesia" experience. Please give them all the support you can give. They just released the full version of their mod on the 5th!

THIS IS A WALKTHROUGH ON HOW TO COMPLETE AMNESIA HILL HAROLD'S STORY!

This french version of second part of Amnesia Hill - Extermination. Translation made by my friend Mangouste.

Custom story for Amnesia the Dark Descent. This story focuses around the character of Ryan Finch in his quest through the dream house, will he be just...

Full Conversion mod for Amnesia the Dark Descent. Harold Mason is just an ordinary man that lives in the suburbs. Nothing was more peaceful than living...

I just wanted you to know, I love your full conversion mod. I love the sounds, the new lantern... everything.

I'm going to use it to play other custom stories :)

I did the same for 5 years now. My favorite mod ever for this game.

Hey Vengicus, Since Amnesia is very well played but does this need DLC to play on Amnesia:TDD? I'll wait for your reply if you are not very busy.

Fixed thanks for pointing it out!

Don't mention it. By the way you have fantastic tutorials on how to create a custom story.

Amnesia - A Tale To Forget Amnesia: The Dark Descent

It's Hurting My Eyes PARTS 1 AND 2 BY LITRONOM Amnesia: The Dark Descent