Age of Empires 2: The Next Chapter

Age of Empires 2: The Next Chapter

It is for the HD version.

There are 18 Civilizations in total and their building sets are as follows:

In the Independance Age, the North American Colonies, Britan and france, and the Dutch, Germans, and Swedes recieve a more specialized set respectively.

The new Ages are:

The Exploration Age - 1492 - 1560
Represents the age of exploration, including famous explorers, and trade with Native populations

Independence Age - 1770 - 1850
Represents events such as the American Revolution, and the War of 1812, when Nations became separate from European Empires. Also represents the era of Napoleon.

Every villager killed gives 50+ gold (the Portuguese had a heavy reliance on the slave trade. Though they usualy relied on African allied nations to supply slaves, there are no African nations, and this is best for the Portuguese)

Every ship killed gives 100+ gold (Portuguese enforced their naval trade power by stopping trade ships and charging taxes and checking for licenses, slaughtering the crew if they didn't have said licenses)

Most of the Portuguese's colonial riches were made off of abusing Indian ocean trade routes, and via the extremely cruel sugar industry. They established relations with African kingdoms to control the slave trade, and conquered Angola and took over Cape Good Hope for the same reasons. The slave trade was very important for the Portuguese, since slaves died faster than they had children, and had to be imported in large quantities.

The Portuguese have many economic bonuses for fighting, but few actual military bonuses besides their longer line of sight, which gives them a slight edge in finding villagers. They must raid early to get their economy going too since they start out with the same resources everyone else does. However, once this is overcome, they can become very strong quickly if they can get at their enemies' economy. They also excel at naval wars, if not for sheer force for their economic strength.

All units have 40%+ hitpoints, +4 attack, cost 2 population instead of one (the Swedish in their heyday had the most powerful army in Europe, known for its bravery and discipline. However, Sweden had a tiny population to draw from, and its army was never very big.)

Units become 10% more expensive, train 5% slower every age (Because of Sweden's low population, they could not afford severe losses)

Pikemen deal +3 bonus damage to infantry/whatever class the gunpowder unit line is (the Swedish focused on closing ranks as quick as possible, firing only one or two volleys before descending upon the enemy. As a result, pikes and swords were used in Sweden for a much longer time compared to the rest of Europe)

Town centers give +100 gold when built (the Swedish had a highly efficient bureaucracy, which greatly facilitated the rise of the Swedish state)


UUs: Carolean- a fast swordsman with high pierce armor and area attack (as stated above, the Swedish closed in and initiated close combat early in the battle)

Allotment System- Each villager produced reduces millitary cost (The Swedes had an "allotment system", where small groups of peasants had to pay for a soldier. This allowed the Swedes to arm their soldiers for a fairly cheap price)


The Swedish were very religious, and pastors were the main source of both moral support and discipline on campaign- they were taught to be brave, since if God wanted them to die they wouldn't be able to do anything to stop it, so some religious Techs are still required.

Get +10 of all resources for each destroyed enemy building (This encourages raiding, which was the official Comanche pastime)

All units have 2+ attack vs civilian units (Comanches were brutal, even for normally brutal Native American warfare)

Unique Unit: Quahadi (Horse Archer with a large bonus vs buildings. Kinda like a horse siege weapon. The name comes from the last Comanche tribe to remain free on the plains)

Unique Tech: Warrior Culture (All units recieve +1 attack. The Comanches were very warlike, if you haven't gotten the message yet. They were at one time or another at war with almost every tribe on the plains, and any Europeans to venture into their territory)

Team Bonus: All units receive +2 damage vs buildings (see above)

All university techs are 50% cheaper (University of Krakow is one of the oldest in the world, established in 1364)

Copernicus - All techs are researched 100% faster

Bonuses:
Reduced price and training time of all gunpowder units by 35%, but lowering HP for 10% (The minuteman)

Landgrab - Mills, farms and houses are built 100% faster, are cheaper and receive massive HP bonus (Attack bonus for house too)

Bonuses:
Villagers/fishing ships/etc gather from all "natural" resources (fish, berries, boars,...) 25% faster
All Iroquois buildings are built from wood only, but have 15% higher price
Iroquois villagers and native units have 15% higher health
Iroquois build longhouses instead of houses. They can be garissoned (3 units) and provide 10pop. However they cost 55% more than a house

Building Health Upgrades give +20% more HP (The Dutch had their own style of architecture.)

Markets give 50+ Gold when built (Dutch marketing has lot of investments in gold.)

Bank - When researched, markets begin to produce a slow trickle of gold

Imperial Reforms: All military is produced 20% faster and all gold income sources increased by 10%

Protestantism: German monk receive +1/+1 armour and all units are 50% more resistant to conversions

Villagers have ranged attack but less HP (hungry but deadly citizens of France?)

Ships are created 25% faster but have less hitpoints (trying to compete with British in numbers, but fail)

Military produced 30% faster, but it is weaker.

Technologies take 10% longer to research, but are 40% cheaper

Cossack Agreement - Russians receive Cossacks in their stables. A quick and reliable cavalry with a bonus vs villagers and gunpowder units

Peter The Great's reforms - Strelets and other infantry receive boost in health and attack, but take longer to create and have slightly higher cost

The Barracks is available to all Non-Natives, and trains the following:

The Stable trains Cavalry, two lines are present, but only one is available to different Civs:

The Arsenal trains multiple cannons, including Falconets, Mortars, and 10 - Pounders

Native Civs do not have access to Barracks, but gain extra unit upgrades

The Elder's Hut is an all new building availible to Natives providing new technologies.

As Native Civs are quite overpowered militarily, they all have strong economic bonuses that reflect the real life native tribes, for example, the Iroquois receive farming bonuses

And last but not least the Mercenary Hut, a building which trains cultural units.

As the mod is not yet complete, any suggestions are very welcome!


Exploration Age Buildings for the Europeans: 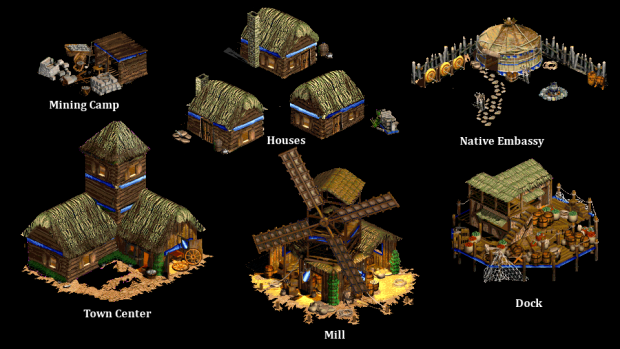 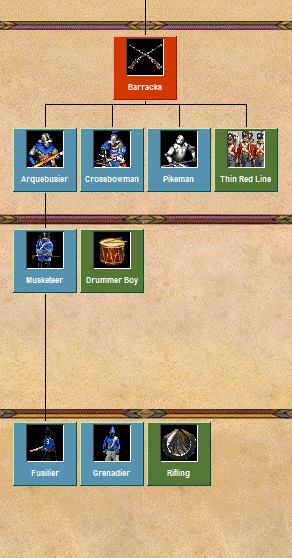 And a battle pic because why not? :P 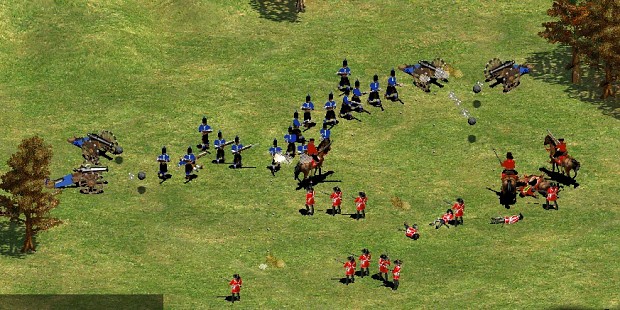 Thanks for voting and helping Age of Empires 2: The Next Chapter on it's quest to become the 2022 Mod of the Year. You are now in with a chance to score some free games from our #modlove collection. Help this mod secure more votes by embedding the widget (or link) we have included below on your favorite sites.

AOE The Next Chapter Pre Alpha 0.1

A Pre Alpha release of the mod. This is no where near complete and this is only meant as a demo of what the mod is currently

Hi? someone plays this mod? Whoever warns me :D.
Im Geaf_Argento in steam

Hello, this is not related to your mod, but I'd like to ask your help for something. Ive been using the Advanced Genie Editor to mod AoE2 HD, but whenever there are updates for the game, all my modifications disappear. How can I mod the game without this happening? Do I need to use another mod tool?

I always make frequent backups of all my modded data so when an update comes and replaces the mod files I can replace them with the most up to date version of the mod. You do lose some progress but if you make back ups frequently enough it shouldn't be to bad.

Hello !
How can i put in the game just the musketers and the artillery with Genie editor?
So how can i add texture,siund,and the data in the game to every nation can be swapn this tpe of units ?
Cuz i cant copy the entire unit in the other data

so please what i have to do ?

Single & Multiplayer
Tags
Embed Buttons
Link to Age of Empires 2: The Next Chapter by selecting a button and using the embed code provided more...