A recently abandoned temple with a complex dwemer machine lies in the Nibenay Basin (Cyrodiil) and it's ready to be claimed.
The mod offers 15 plants and ingredients from Oblivion (found around and inside the house). Inside the temple you'll also find a dwemer teleporter that lets you travel to Crosswych (High Rock) and Artaeum (Summerset Isles) where merchants are selling rare spells, staves and ingredients.
Everything is custom: from assets to music, as soon as you use the teleporter you'll find yourself in a completely new place filled with nostalgia.

WHERE TO FIND IT

PLANS FOR THE FUTURE

Ave, true to Caesar.
Nerva was the best emperor by the way, and his bronze statue is just sublime.

Oh right, I need to update you guys about the mod...

PS. Join the discord server for all the updates: Abandoned Temple - Discord

We're finally here. Many of you won't believe me since it has been 2 years, but we're here.
Alpha version is so close you can almost touch it.
I'd like to thank all the people that showed me support during the development. It was a long journey where I learned a lot about 3d modelling, texturing, art, architecture, history; and your love surely helped me in keeping the motivation.
A single person making a mod this complex must have a lot of determination to keep on working for so long.

This is the mod I always wanted to make and I'm really happy to share it with everyone.
Enjoy several new screenshots before joining me in the gardens.

I've realized that I never really told you about the story behind these particular worlds.
Ok so...

Many, many years ago an imperial mage found in an abandoned temple a strange dwemer device that allowed him to shape daedric pocket planes at his will. Being full of inspiration he began creating worlds never seen before: endless gardens, luxurious cities and palaces, tropical paradises and lush woodlands where many mythical creatures, poets, artists and sages lived.
Out of all these realms he only considered one to be his real masterpiece, a monument to his lover, a special place. 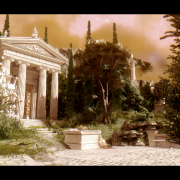 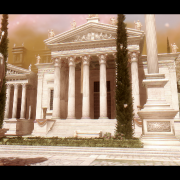 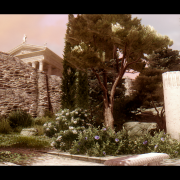 However, as all Tamriel knows, it's always best to avoid meddling with daedric stuff.
It didn't pass long until one daedric prince noticed this luxurious environment and, for his own entertainment, started playing tricks on the mage's mind, turning him insane and throwing him into depression.
Unable to react to the prince' schemes, he watched helplessly as the daedric lord began destroying his creations with fire, sandstorms, and volcanic eruptions, killing the people living in them...including his lover. Everything he cared and loved was annihilated, and so was his will to live.
Having lost any attachment to life, the mage created one last pocket plane, the so called "Eternal sunset", where he spent his last days in silence, mouring his lover.


Many, many years later a traveller sets foot into these lands again... 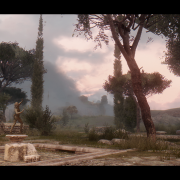 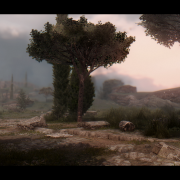 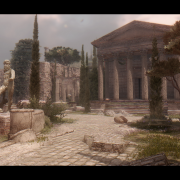 Only to find an hazardous land filled with ruins, corpses and debris, where the air is barely breathable.
Many treasures are still hidden here but won't be easy to get them.
You'll have to survive the terrible heat, avoid the toxic volcanic hair, fight horrible monsters, survive the stench of the catacombs...and jump into time-rifts to enter the memories of the dead and experience once again the glorious past. 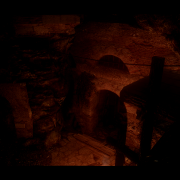 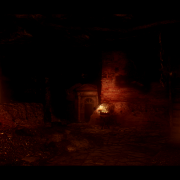 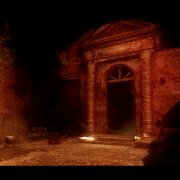 But this mod won't be all about landscapes.
As said in the past, both in the Garden of the Faun and in the Palace of the Sun (the desert-world) you will find vendors with unique armors, weapons, ingredients, spells and summons.
Screenies for a special armor (wip) and the unique Daedroth! 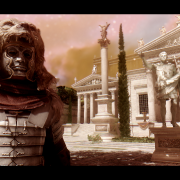 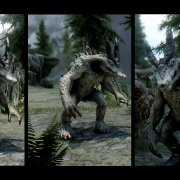 The mod is in the very final stage of development. I need to do some fixing, reduce number of meshes, connect areas, navmesh and other minor stuff.
I will release an alpha version - meaning there might very well be bugs, "holes" and such. No quests and dialogues for now, will add later.
But it's still quite polished overall, shouldn't ruin the immersion.

A general update on the features and assets I'm working on and my special wishes for a happy new year!

Reuploading the old version of the mod with Valenwood.

Another year, another missed deadline

Didn't know you were my boss. When did you send me the last paycheck for the mod? :O
Join the discord server for all the updates folks! Wait you there :)

Hey, jsut wondering, is there a version of this that works with SSE?

I've just opened a discord server where I'll post screenshots almost daily and updates about the development, and where we can discuss the lore, the story, share ideas and feebacks. See you there!

Link updated, this one works.

Tried to join, but it gives me the invalid invitation thingy... :-(

Updated the link, thanks for reporting!

Absolutely gorgeous, man! I've been following this mod since the beginning and I am incredibly excited to see it come too fruition. Just out of curiosity, will the Aug/Sep release include an sse version?

If only I had a penny for all the times I got asked about the SSE version 😏
I'm afraid not because the schedule is pretty tight and I want to make sure that 1.4a version will be decenlty playable by everyone.
This is the plan:

- Release of 1.4alpha
- Bugfixing and such after feedback for a 1.4 stable release
- Adding some stuff such as short quests, dialogues, a follower and 2 small interiors and maybe a small worldspace (this won't take long since I have everything ready pretty much)
- Release of 1.5, last and definitive version. At that point an SSE version will be released as well.