Been on moddb for a decade (2010-30th december of 2019)... Decided to erase it all, take a break, and now, with this covid19 pandemic and lockdown, I start a new account... a new kind of commitment to the HL community. 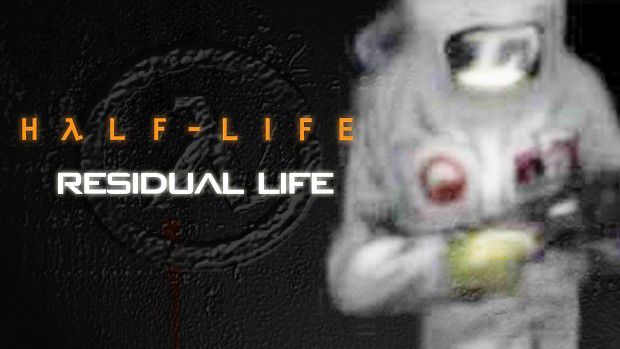 This is it, the final public release (feb 2020) of Residual Life, started in 2008, first released in 2012, here you have quick links to everything... All levels, all secrets, all endings. Some parts where done with cheats, you have links to these parts done again, but now, "fair", without cheats.

Don't forget to play in HARD mode to get access to all levels, secrets, trophies!! Some doors are locked if you play on easy or medium, preventing you to get to some parts where you can find trophies !!!

First of all, play on "HARD" difficulty otherwise you'll never finish it 100%, paths, secrets, doors, will be locked or out of reach.

This is complete walkthrough of 1.9, latest release (feb 2020) of Residual Life, a mod from Korean team Radiation Studios (lead by "Toxagen"), a sequel/interquel of the mod "Residual Point" and "White Force".

You play "W, Sora Kim", a female PhD, MIT, Theorical Physics Decided Assistant, working as a Reactor Operation Engineer in Lambda Complex.
Her trademark suit is the white "cleansuit" as introduced in OpFor, and not the HEV suit used by Gordon Freeman, therefore the "White Force" in the title of their first mod (RP and RL can be seen as WF2 and 3).

The fist part of this walkthrough is regular Black Mesa but as the plot becomes more and more complex, it is better to tell that it's not in the same timeline as HL1, but rather in an alternate timeline (alternate or even dream-like, in the likes of the Phantasm franchise), where the Resonance Cascade occurs but not from Freeman, and the Xenians/Combine are a bit different from what we see in the retail games.

0) UNUSED SELECT LEVEL ZONE : this is where you select training levels and can see various fun stuff with K-pop.

#) GREAT ESCAPE : training level "medium" difficulty, in the map's of Resonance Cascade, just some fighting against vorts and zombies.

1) IMPOSSIBILITY DREAM : This is the eerie intro, strarting where Residual Point ended (last map + deleted map "Residual Point"/"Final Escape"), you wake up in Black Mesa dormitories, you can wander around in BM pre-catastrophe but no custom sequences or voice overs.

2) BLACK MESA INBOUND : This is the classic tram sequence.

3) ROUTINE WORK : The Resonance Cascade occurs as you work at the Lambda's Reactor Coolant System. You don't see what or who triggered the event (Freeman? Jack Sohn from Residual Point? Other?), This is where you find the first secret "LOST BATTERY" : Get the 2 batteries after getting your cleansuit.

4) STATE OF EMERGENCY : you're rescued (got CPR!), escape this mess, find weapons and allies. Second secret "DEMON SLAYER" : kill the reskinned headcrab in that hard to reach vent.

5) LEGAL DEFENSE : HECU's arrival. Third secret "Circle of death" : first one, second one. Fourth secret "Chaotic Butcher" : you have to clear 2 sand fields of their headcrabs, it can be long, take a Barney with you, helps a lot, first one , second one.

THE FIRST 2 PURPLE CELLS : We go back because we need to find the purple cells, here 2 out of 5, needed to go to the hidden true final boss, at the very end of the mod.You can find also the very first laptop explaining a bit the background of the story.

This where we go to bonus level "One is All, All in One!" for the last secret, but if you don't, I show you the "regular" path to the next level "Ground Zero".

6) ONE IS ALL, ALL IN ONE! : bonus level in some sewers. Last secret "Dark Golden Energy", a Grav Gun. The way to do is here, this door will be locked if you don't play on hard, or if you didn't get the "chaotic butcher" secret. DGE secret is not only the last secret but also, later, the only way to "Chosin Resevoir" bonus level for the 3rd purple cell.

7) GROUND ZERO : Lambda Reactor-like level with various teleports to activate. If you get all secrets, this leads you to the bonus level, if not, you go straight to No way Out.

8) BETWEEN WORLDS AND CHAOS : Xen level, bonus level with no enemies, but with ammo and health.

9) NO WAY OUT : Surface Tension/On a Rail mix level. You encounter "Zgrunts", enemies introduced in Residual Point wich are HECU experimented upon by Xenians.

10) COUNTDOWN : Surface Tension 2... with Black Ops instead of HECU.
This ends with the place, where you have to choose between 2 paths, "Xen" or "Black Mesa". No turning back from that point.

This is Road 1, "XEN", which leads to its own final boss and ending. However, Impossibility Dream/Credits/Epilogue are common to both roads.

11a) COUNTDOWN, save the scientist, who opens a door, then go to the nuclear warhead.

12a) NUCLEAR PORTAL, melting-pot between real world and Xen world, maybe out of time and space... Did that nuke blow up in your face anyway?

13a) RUINS OF CHRONOS : Xen world but you can see sometimes, the ruins of an ancient and forgotten civilization.

14a) ASHES OF LAUTREC : Xen world, ending with a Citadel building taken over by Black Ops (for some reason, the sound doesn't work for this last part).
If you got the "Talisman" , it will open the way to the final boss.
If you don't have it, then the Heaven's 'Door will stay closed, no text will appear, and you are sent back to Road 2, level "Heart of Nightmare" (see part 4).

15a) ALTAR OF SACRIFICE : The Nihilanth/leader of the Xen forces in this mod is a black Boo. It works the same as the original, shooting lightning bolts and teleporters, which sends you to four elemental (Earth, Fire, Water and Air) places where you destroy each crystals.
In the end, you destroy the "talisman system" whatever that means (maybe the same as the Nihilanth holding the giant portal leading to Earth?)

16) IMPOSSIBILITY DREAM : Tram outro, the end makes you question if this was all real, a dream, or another reboot done by Gman, like Residual Point.... maybe for another story in another Residual mod?

17) CREDITS featuring all the 500+ faithful followers on moddb.

Road 2 dubbed "BLACK MESA" with its own final boss, ending. Both roads to the same outro.

There are a few issues on this playthrough (sound, cuts).

THE PATH TO ROAD 2, jump in the lower canal.

This is the "regular" path to Ashes to Ashes, Dust to Dust. The "locked" elevator door at the end is the exit door of the bonus level,

11b) CHAOTIC BLUE, bonus level, the fire door will be locked unless you got all previous secrets (Lost Battery... to Dark Golden Energy).
If you manage to free the scientists, they will open various rooms, one with both Tau Cannon and Gluon Gun,
and other stuff linked to the influences of this mod ("Sensorama" from Laidlaw's GADGET, etc...).
In the end, you can shut down an energy transmitter connected to a mysterious black sphere in another dimension that you'll meet again at the very end of the mod.

12b) ASHES TO ASHES, DUST TO DUST : Maze-like level full of tunnels, reservoirs, and battles against Black Ops and Xenians.
You discover the main purpose of this road, stop the crystal harvesting of that giant crystal (you see its "head" here),
it is a "Xenium" crystal, based on Laidlaw's book GADGET and THIRD FORCE, an endless power source with time- and space-bending properties.

13b) HEART OF NIGHTMARE : More battles around the "core" part of the crystal, the "nightmare" is due to powerfuls and countless enemies,
Bigger and faster-shooting Vorts, Cloaked sniper-wielding Black Ops, and Zgrunts.
In previous versions, Gman was in the elevator with the nuclear warhead, then it was the warhead only, now it is empty.

14b) CENTER OF ALL THINGS : Final part inside Black Mesa at the "bottom" part of the crystal. In previous versions you just had to run to the warhead and it was the end.
Final Gman's sighting at with a GoldSrc Combine Hunter.
I choose to do a "maverick" way, going as fast as you can to the big door, and let Xenians and Black Ops kill each other.
This is also the "final" level if you don't play on "hard" and/or have the 2 purple cells (see part 1), you go to the outro.
Otherwise, you go to the true final level,

15b) THE SUN EATER'S PILLAR : The topside of the crystal's harvesting is connected to some mystic energy device in a Citadel-like building.
This level is bigger than anything else in the whole mod and is full of ridiculous battles where you face countless waves of enemies (Of course, it's their homeworld...).

15b-bis) CHOSIN RESERVOIR : Bonus level in 1950's Korea war setting. Listen carefully : when you go to that giant structure,
DO NOT TOUCH ANYTHING. Go to the little plot in front of the giant door, and if you have Dark Golden Energy secret (see part 1), you will automatically place the G-gun. The blue crystal sphere will shoot a teleporter to that level.
The THIRD PURPLE CELL is at the end, and then you go back to the level's beginning and then to :

THE SUN EATER'S PILLAR (part 2) : Countless painful battles. There are impressive lightning bridges and an annoying unending alarm.
Being a big Xen factory, there are some cells/incubators? for various Xen creatures, rail tracks for alien trains, storage for Manta Rays.
Various laptops attempting to expand the plot.
The FOURTH PURPLE CELL is at map rl02u3u (the door leading to it only open if you play on Hard or if you got Chaotic Butcher, cf. Legal Defense) I shot my way in and out with Hornet Gun and music.
Another laptop.
Long battle for the last time against Black Ops who send everything : soldiers, tanks, Apaches, air strikes.
FIFTH (and final) PURPLE CELL in the control room.

15b-ter) THE TINY DWARF : The boss' door won't open unless you have the 5 purple cells.
It is a mix between Full Metal Alchemist's antagonist "Dwarf in the Flask" and the Demon Kings from Slayers.
He'll send many enemies and shoot countless electric waves whenever he sees you, and sometimes, dozen of RPG rockets.
Final laptop explaining about an ancient evil sealed, and how governments send soldiers to this outer world for « sacrifice ».
The battle begins there, Run, strafe, hide, heal, shoot the crystals (crossbow is best).
You meet again the black sphere from CHAOTIC BLUE, after the boss' death.
Could be "Dark Golden"/"Lord of Nightmares" aka "God" in Slayers universe (hints here and here).

THE SUN EATER'S PILLAR (finale) : even with their leader's death (replaced by an artifical sun?), you still have to fight Xenians, equally pissed off Black Ops, and stop the pillar. The enemies spawn endlessly,
so just activate the plots quickly, hide, wait for the green screen, and run to the teleporter at the center.
The Black Ops send air strikes when the pillar is shut down.
This ends with Sora Kim placed in "spatial isolation".

16) IMPOSSIBILITY DREAM : Tram outro, empty nighty Black Mesa, you meet a curious Barney... was it all a dream, or does Gman rewind time?

18) EPILOGUE : Run your way to the spacecraft.

This was maybe the greatest, longest, hardest HL1/GoldSrc adventure ever made.