Hi everybody! I'm trying to be Game Designer and now I'm focusing on creating a little Unity game!

Aug 27 2014 Erwaitin Blog
Note: this post was created to answer a question in Quora. To see the original you can visit: Quora.com

First at all, Kingdom Rush Frontiers is a challenging, funny, and well balanced game so improving it is not an easy task. I'm assuming that you're asking about improvements, not adding content (if you like the game, longer campaign and more heroes can be an improvement).

- Objectifying: when player faces a map where he/she has been defeated, the player needs a way to get better. Why have I lost? Which ones were my errors? How can I avoid repeating them? One of the best ways of doing it is objectifying the player performance or what exactly happened during the round.

E.g. you lose on a map and a screen let you see how much damaged have you done, which type of enemies healed themselves, which ones went through your defenses... a game that has a great (but not perfect) system to do this is League of Legends. After a match ends, you can see some statistics that let you know accurately what happened. 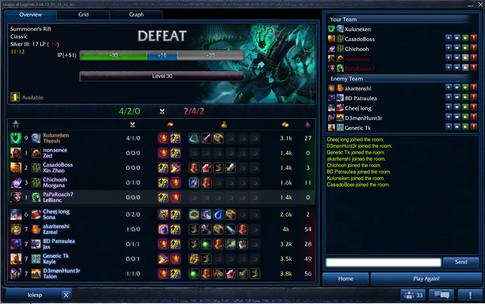 Creating this kind of system let the players now about his/her performance and creates a simple way to improve.

- Perceived imbalance: one of the lateral problems that are related to the lack of objectifying is the perceived imbalance. Imagine this: you try the game for the first time, you have your first hero (Alric) and after some rounds you have some coins to spend. You read carefully every ability because you now that coins are really hard to get and you find this: "Sand Warriors III: summons three sand warriors with 140 life each" Is easy to think "Ehhh... 3 warriors? 140 hp each? My hero has 300 hp! That's the best ability ever!!!!"

Of course a game has to be balanced (KRF is well balanced) but it has to show it or the perceived imbalance is going to push the players to the get the ability/object as if that was the last thing that could they ever make in their lifes. Fighting the perceived imbalance is not an easy task but some of the main techniques, aside from objectifying, are informing the player about alternatives or rewarding the player for choosing different alternatives.

- Making spending money an attractive task: I love games and spending money on them is something I like, but for doing this I need to know what I'm buying. KRF has a problem here: the main way of spending money is buying heroes, but I don't know what exactly I'm buying. How can Ironhide Game Studios make this task more attractive? Showing me the heroes. A small video, some screenshots of the abilities... whatever it is that makes my hype grow!

- Minor improvements: some minor details can improve the game easily:

Hope that was what you're searching for with your question.

Closing the blog for reviewing!

This blog is not dead, just on exams

A group for the Spanish community on ModDB! Open to all users, Spanish or otherwise. Feel free to join. | Grupo dedicado a los españoles en ModDB.

This groups is formed only to until the mod Licor de Cactus get finished. We are creating a mod to get experience and to get further in our techniques.

is your steam Erwaitin? and very good work on that map! I COULD NEVER DO BETHER! Youve broke my heart ;')

Sadness about your blog. Maybe you shud start hanging on to and helping peeps getting custom content for their mods? Theres too many mods failing because theres no custom content exept maybe 1-2 reskins.

Hi! I'm working now on my curriculum. I want to be game designer so I'm following the Top Ten Tips I found on Gamecareerguide.com. Now I'm doing my own serioues level and I'll publish it as soon as I think it will be great. Thank you for your support mate!

Gracias for good reading and not wasting my time :D

I'm following your work on Modern Dead, I hope your project keep the right way and we all will enjoy it.