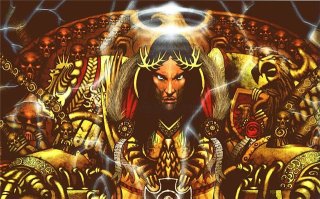 The Imperium of Man is the galactic empire under which the majority of humanity is united. The founder and ruler of the Imperium is the god-like Emperor of Mankind, the most powerful human psychic to date. Founding the Imperium ten thousand years ago, he continues, at least nominally, to lead it.The Imperium is the largest and most powerful political entity in the galaxy, consisting of at least a million worlds, which are dispersed across most of the Milky Way Galaxy. Consequently, an Imperial planet might be separated from its closest neighbour by hundreds or thousands of light years. As a stellar empire, the size of the Imperium cannot be measured in terms of continuous territory, but only in the number of planetary systems in its control.Several aliens and forces - the forces of Chaos, Tyranids, Eldar, Dark Eldar, Orks, Tau, Necrons - challenge the supremacy of the Imperium. From within, the Imperium is threatened more insidiously by rebellion, mutation, dangerous psykers, and subversive cults. Without the protection of the Imperium, mankind would fall prey to the countless perils that threaten it. 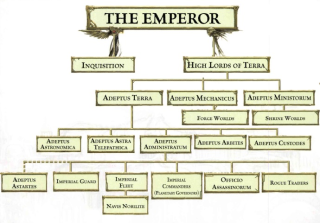 WARNING! THIS GROUP IS ONLY FOR LOYALISTS! WE ARE AGAINST CHAOS! CHAOS MUST DIE! LONG LIVE IMPERIUM! LONG LIVE EMPEROR! LONG LIVE TERRA!

The Predator is a battle tank employed by the Space Marines. It is a more heavily armed and armoured version of the Rhino personnel carrier. There are...

New skirmish map set in Svarog Sector for 8 players and only for Soulstorm expansion.

This is the story about Byzantian Janissaries Imperial Guard from Terra. (by my serbian friend Alex Popovic)

You mean Chaos must RAPE. And it already has, is still doing so right now.

The Greater Good will prevail over both the barbaric Imperium of Man and the spawns of Chaos.

Thanks for joining group!

anyone know what mod is this Img265.imageshack.us

e guys and gals, do you know of ''ALS ICE BUCKET CHALLENGE'', well if you do or dont I am posting video of ''WHY AND WHAT'' Youtube.com I suggest you watch it

I would do the meme but the Departmento Munitorum has yet to issue me a Sword since that drinking bender with some Space Wolves.

To all heretics and daemon worshippers alike know this
the astartes will hunt you down we will crush under our mighty war machines we will burn you away with bolter and flame we will break you with our faith we will cast you into the void from wich you came and from this great victory man will finally be clean and pure we will stand together against any foe tyranid or necrontyr we will do so with trust in our minds and faith in our hearts
your darkness will not and can not destroy us for we carry the emperors will as our torch and with it we light the shadows....your shadows and when we have destroyed you all we will obliterate all evidence of your very existence not even the tale of your precious warmaster primarch Horus will be leftyou will be utterly destroyed to the unthinkable level without mercy or respite so make yourselves ready you cannot win

I'M GOING TO CHAOTICALLY FIST **** YOU, ASSCLAPEARTHQUAKE. FOR SLAANESH! She's gonna record it on tape and sell it, then we blackmail the **** outta you.

Is that so? Then come your death awaits.

you would DARE mock us!? you are truly the definition of the scum i scraped of my land raider treads yesterday!!!!

Tags
Embed Buttons
Link to Chaos Must Die! (W40k) by selecting a button and using the embed code provided more...

Photographers of the Zone Arts & Literature with 48 members