Every summer, gamers go through a debilitating drought. The well of releases worth playing slows to a trickle and many are left to do nothing more than drool over the titles planned for release next holiday season. It's during this time that many gamers come to ModDB to satiate their gaming appetites. They search high and low for something that will pique their interest.

While the MOTY Awards provide a wealth of choices among mods and indie games, they usually overlook gaming gems within our community released in the first half of the year. To combat this oversight, ModDB has launched the Summer of Mods & Indies event! Featuring exclusive content from all the major releases of the last 6 months, gamers are bound to find something to quench their thirst.

The Summer of Mods & Indies provides much needed exposure to mods and indie games in order to help them connect with their potential audiences. If you'd like to participate in this year's event, your too late... entries closed on July 15th. Instead sit back, thank the presenting sponsor US Air Force, and prepare to be bombarded with exclusive content from the best mods and indies from the first 6 months of the year.

Behind the Scenes with The Nameless Mod as they pull back the curtain on seven years of development.

The Nameless Mod took all of 7 years (plus change) to realize its vision. Much was learned in that time and ModDB is working with the developers of TNM to pull back the curtain on Deus Ex's greatest mod. First up is the in-depth post-mortem, the intro to which can be found here.

Part 2 of the post-mortem covers what went right. Part 3 covers what went wrong. Great reading for any other mod developers. These guys deserve the kudos for sticking out the whole project and pulling something cohesive out of it.

As an added treat, TNM developers have put together special commentary videos. The first video shares behind-the-scenes commentary on the development of the 'Downtown' hub area. The second video dissects the Air Traffic Control mission. This third video showcases the booby-trapped maze that is the Old Server Complex. The fourth developer commentary installment discusses the Deus Ex Incarnate mission. 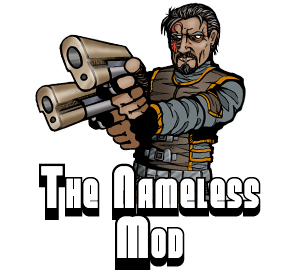 An inspiration for dedication! :)

Dedication of absurdity, I'd slit my wrists after 7 years of working on the same game.

Lucky thing for us it was a hobby, and something we enjoyed working on :-)

Seems like a good time to drop a link on ya:

That interview is actually embedded in part 2 of the post-mortem :D

The Nameless Mod is the better singleplayer mod i have ever seen.
Commercial quality.
60 hours to beat the full game.
Epic stuff.

Can't wait for your next sci-fi indie game. :)

Thanks Turj! We're trying to take everything we learned from TNM and role it into a bit more of a serious setting while maintaining the core of what made TNM fun to play. We're really, really excited about it!

60 hours!? Holy ****, you must really like exploring! Do you mean one or both storylines?

All what Turj said, this mod is what singleplayer fun is about. Its fun to play, vast in features and stuff and all of the stuff really matter in a way or a another that theres almost nothing useless or pointless in terms of content, the whole game is challenging and you can tweak it to your liking in various ways, the story is open ended and alot of choices you make can turn the whole ending will keep you stuck playing this game over and over again (5th playthrough for me btw, not boring one bit. And thats an achievement. A fkin big one.).

Big praise to you guys, I love this mod!

I remember hearing about this mod a month or two ago. I only got to see videos of the game play (which was entirely amazing).
It's good to see that it's getting more attention now

did you guys work on duke nukem forever, too?

If we had, it'd never have been cancelled.

Heh.. well with DX3 in the works, it's awesome to go back and play the original. And this mod just adds to the experience. Considering the fact that you went through ALL the way to get voice talent and what not.. this is a VERY crazy, but very awesome modification!