All is welcome to come and contribute to this site. If you are good at developing, then share your knowledge via tutorial(s) or whatever means you deem necessary.
But first things first. History of Killing Floor, an Unreal Tournament 2004 mod. Its creator is Alex aka (also known as) AJ_Quick. It is a survival horror first person shooter set in England (ModDB, Killing Floor). It was first released on 2005 as a demo. The objective of the game is to survive. Survive the continuous barrage of zombies that attacks in numbers, ever increasing and ever changing at each wave. (Wikipedia, Killing Floor). The player is given a set of weapons, but can purchase more and deadlier weapons as he/she increases monetary supply as he/she kills zombies and as he progresses in his struggle (accumulates PERKS). The basic weapons that comes with territory as the player enters the game are a pistol and a knife.
The game went from being a free-for-all (Unreal Tournament 2004) to a Steam/Tripwire franchise. A lengthy overview can be found at its Tripwire site.

But before Alex brought Killing Floor to Tripwire's attention (2008), die-hard KF UT2004 gamers kept the game's format and added their patches into it. MiA Raj, Snipe34, and other endowed gamers continued the Killing Floor (UT2004) 2.50 and took it to another level, 2.52. Here is where Miasma came in. Started by MiA Raj and worked over by Snipe34 (a modeller/coder/developer) and his mentor/coder, Hamada, it grew to a large following.

Miasma UT2004 is maintained by MiA Raj for a while. It kept getting members and grew as the sole site that hosts and maintains the KF2.52 game.
PERKS: In order for the player survive, he has to eliminate specimens (Undeads who were experimented on and came to life). As the player accumulates points (also known as HP or hit points) from killing zombies/specimens, he "levels up". Killing Floor mod wiki gives you a detailed setup of the different perks available for the player and the corresponding "how"s to UNLOCK them. Startegy Wiki gives you a complete list of the perks you acquire as you get points. Each perk allows you to perform specific tasks more effectively as you accumulate points. MEDIC, SUPPORT, SHARPSHOOTER, COMMANDO, and BERSERKER. See pictures below: 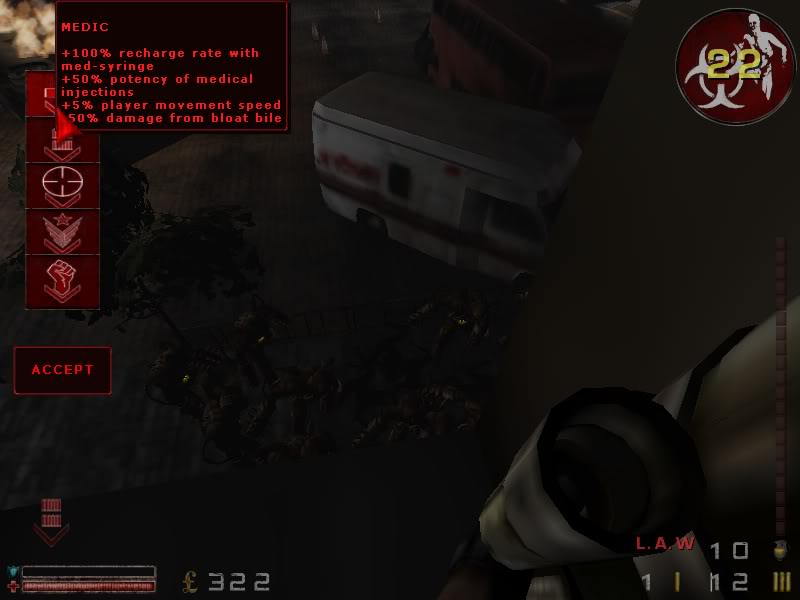 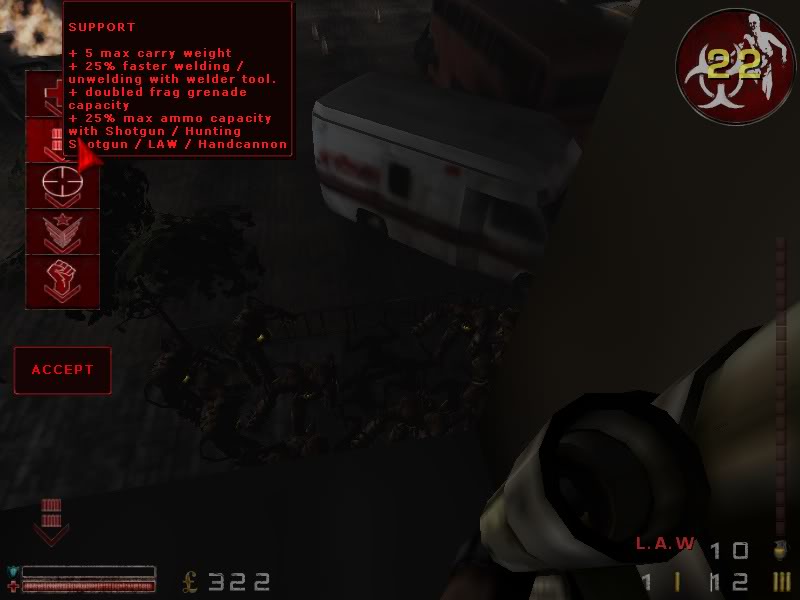 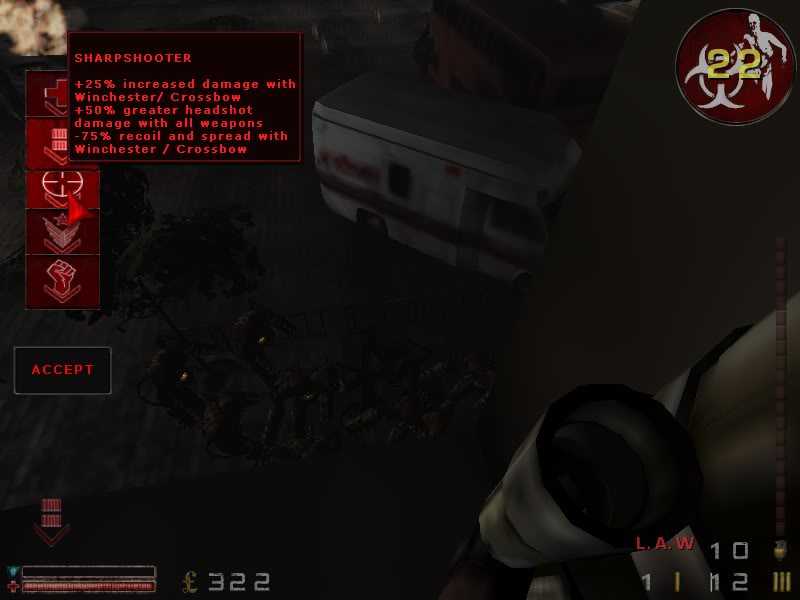 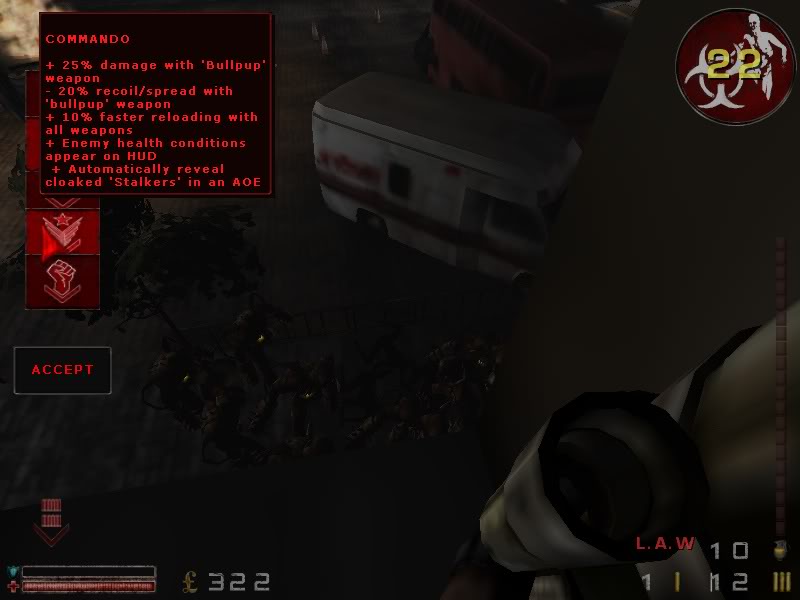 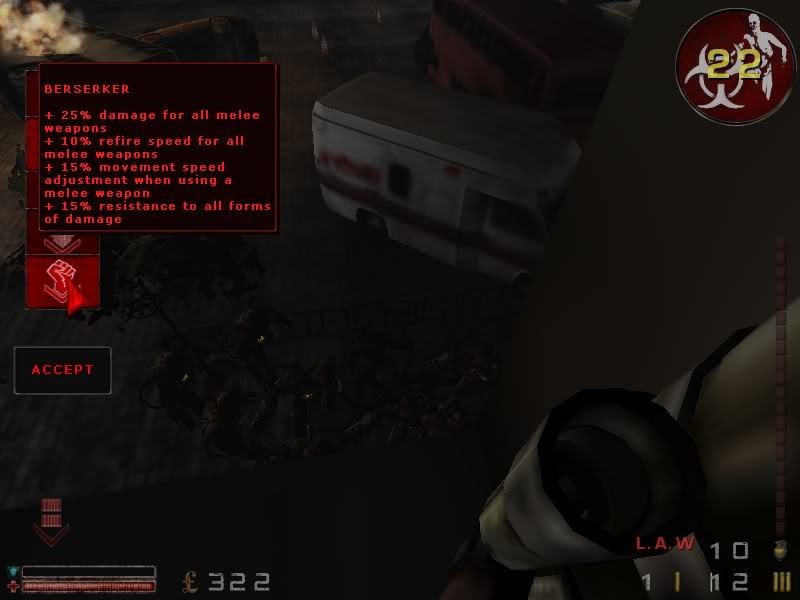 WEAPONS: The player comes equipped with a pistol and a knife. But he is availed with several deadlier weapons by the trader, or by random weapon spawns lying around the map. The weapons consist of the AXE, BULLPUP, CHAINSAW, CROSSBOW, DUALIES, FLAMETHROWER, HUNTER SHOTGUN, PIPE, SHOTGUN (12-gauge), SYRINGE (medic), WELDER GUN, and WINCHESTER. See picture below for a graphical representation (courtesy of SilverSpiritUK - DeviantArt).
There are a good number of weapon selections. Killing Floor mod wiki gives you details for the UT2004 mod. Strategy Wiki covers them in detail.
1. Medical Kit (Syringe) - This is your standard basic weapon use for restoring your health. Use this kit to restore your team mates and gain 1500 HP (hit points) to get your MEDIC perk.

2. Welder Kit - This is your second standard weapon at your arsenal, your welder gun. You use it to weld and unweld doors. This is a necessary weapon for the SUPPORT perk. Use it as often to get your 2000 HP (hit points).

3. Vest - This is another item that you can use as an added weapon for your own protection. This can be had as a spawn or you can purchase it from the trader.

4. Pistol - The player get at least one pistol as his/her default arsenal. When you're down to nothing with your assault guns, then you can pull out your pistol to give you at least 96 total bullets (8 clips of 12 rounds).

SPECIMENS: These are the hordes of experimented undeads. They range from skinny clots, heavy bloats, female stalkers (they turn invisible until they're ready to strike), muscular gorefasts, spider-like crawlers, scrakes (butcher with chainsaw for an arm), female sirens (clothed in a strait jacket and can kill you with her scream), golden fleshpounds (big guy with metal arms), and finally the patriarch (also known as patty). The patriarch used to be Kevin Clamely, Horzine's chairman and research scientist, until he transformed himself into the creature.

MAPS: The game consists of two types of map modes. Story and survival modes. Most of the integrated (core) maps in the game are survival maps. KF-Biotic Labs, KF-Manor, KF-Offices and KF-WestLondon.
STORY LINE: Here lies the tale of what happened, where it all began, and who are the ones responsible for the worldwide terror. The company that holds the secret to the epidemic is Horzine Biotech. The one man who took upon the task of transforming humans to undead aberrants is Dr. Kevin Clamely, the CEO of the company. He was later changed into one of his creations, and was called The Patriarch. He experimented on himself hoping to gather his experiments (specimens) back together to himself.
NOTE: Check out the NEWS section below for updates.
IMPORTANT LINKS:
These links might be of some importance to the serious Killing Floor (UT2004) gamer/modder/coder.
1. Killing Floor Mod Wikipedia - Reliable source of the Unreal Tournament 2004 mod history.
2. Killing Floor Mod Wiki - Main source of information dealing strictly with Killing Floor mod.
3. KF Mod Community Team - A new developer's section on ModDB started by AJ Quick.
5. Merc's Hell Zombie Mess KF 252 - Darkelarious Merc's Hell Zombie Mess KF252 server.
6. [MiA]Zombusiness KF252 - [MiA]Raj [MiA]Zombusiness KF 252 server.

Here is the answer to some of Killing Floor Mod's question on new weapons.

There are not a few models that are incorporated to the latest version of the Unreal Tournament 2004 mod, Killing Floor (KFMod20 V3.0). Read more below.

Here is the current version of Alex Quick's Unreal Tournament 2004 mod, Killing Floor (which is now owned by Tripwire).

My Own KF Server, MahloeehDnM

Welcome one and all to MahloeehDnM Killing Floor mod server. Come in and join the fun.

hi, i own KF on Stem and i played a lot...tried a free weekend of the sequel but don't liked it..so i want ask is there a way to try the original mod? i have my retail cd copy of ut2004 ofc...i want try the first cu<z i heard is more creepy..what fles i msut download? thanks

I'm pretty sorry for long absence, but I was doing thing such a removing a virus, named windows

Hey. Long time no hear. Glad you stopped by. Yeh, I just got a new server.

"I'm pretty sorry for long absence, but I was doing thing such a removing a virus, named windows"

LOL. Anyways, nice to hear from you again.

I am implementing new perks for the mod, but am currently waiting for AJ Quick's reply on my request for permission to use them - additional perks.

This was a pretty good idea, since there's a KFmod section here... but I think Raj has admin access over that, too, so it may or may not be dead, so...

Command and conquer mods and addons Other with 2 members

Furry Femboys Other with 28 members