WindForge is a side-scrolling block-building game where you explore hostile skies in an ever-changing Steampunk world. Everything you see can be created or destroyed, creating an RPG without barriers that rewards creative problem solving and improvisation. Take off in fully customizable airships, and embark on a journey of discovery and survival that will take you to the heart of the world and beyond. This project has been funded to date by the studio itself, coupled with financial support from the Ontario Media Development Corporation’s Digital Media Fund and a successful Kickstarter campaign.

The modern way of life on Cordeus is reliant on refined Sky Whale oil. Everything from the machines used daily, to the food that is eaten, is ultimately dependent on the oil. The citizens of Cordeus are so hungry for oil that the once abundant population of Sky Whales is dwindling. At current rate, the noble species will face certain extinction in a few short years. To avoid falling back into the dark ages, civilization must find a new source of energy. It is said that an ancient people named the Aetherkin had exotic sources of energy. Energy more powerful than anything any human has ever seen. Unfortunately, research related to the Aetherkin is strictly forbidden by law. In an attempt to save humanity’s way of life, YOU have been secretly hired to uncover this ancient energy source.

With my last post I experimented with using propellers defensively. I was able to setup up propellers on the ground that prevented enemy artillery shells from being able to hit me.

For my next test I wanted to figure out how practical it would be to do this on ships. This would be great since you are much more likely to encounter enemy ships while you are also flying a ship. The challenging thing about this though, is that you actually need them for flying too. This means that every time you change direction on your ship, your propellers will suck or blow in the opposite direction that you are accelerating. To make things worse, if you the propellers are turning in the wrong direction, they will actually suck the shells into your ship, instead of defending you.

To test things out, I made a giant wall of propellers on the side of my ship. Then I spawned an enemy ship to see what I can do. After playing around a little bit I was able to figure out a technique that would allow me to push away the enemies artillery shells. Not only that, I was also able to deflect the artillery shells back into their own ship quite often. Check out a screenshot of this in action below. 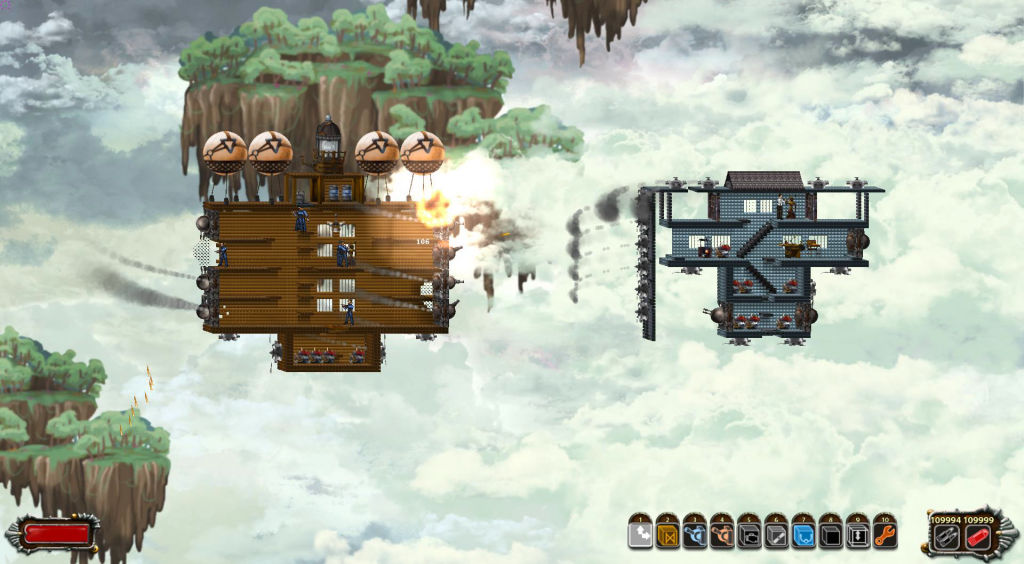 Here's a quick action video of this on vine.

Like I was saying, this whole thing requires a bit of technique from the player. Every time you want to deflect an artillery shell, you must be moving away from it. This isn’t so bad since you reflexively try to move away when you want to get away from danger. I just had to be really conscious of the fact that I didn’t try to get closer when there were enemy artillery shells around.

Also, I ran into a bunch of cases where the enemy shells were getting sucked into my top propellers. This was happening because they constantly need to be sucking downwards in order to keep the ship in the air. I haven’t really experimented with this yet, but you might be able to use this fact to your advantage in combat if you are having trouble hitting your target. All you need to do is aim for the region where air will be sucked in and, you will likely hit the ship.

Is this technique practical? Maybe? If your aim is to attack a ship, it will be a lot faster and easier to just directly shoot it. That said, if you are out of ammo, want to conserve ammo, have broken turrets, or just looking for a challenge, this technique might be for you. I’m just happy that you can do it :)I feel like there are still a lot of cool things you can do with propellers. If you find other cool uses for them, let me know!

Windforge Coming to Steam in March

Windforge has found recent success with a 50k Kickstarter campaign and Steam Greenlight.

you must add a survival mod or free play