Ever wanted to travel through time, become a master at martial arts, eat soup and own a primate, a castle and a starship? Then this is your game! Wiki-Based-RPG is an open source, text based game, with somewhat experimental gameplay. The server writes a story - based on key words which the game gets from Wikipedia (or any other wiki, if you modify the code a little). Between every two story sections, the heroes (the players) are allowed to reply by saying something, doing something or using something from their inventory. No two stories are alike, but all stories are guaranteed to be crazy! At the end, you can export the story directly to .html and show your friends, post it, or send them to me so I can post them here!

Thanks for voting and helping Wiki-Based-RPG on it's quest to become the 2021 Indie of the Year. You are now in with a chance to score some free games. Help this game secure more votes by embedding the widget (or link) we have included below on your favorite sites.

I'm proud to release the next version of the Wiki-Based-RPG, which has been uploaded and should be authorized soon.
As always, you can also get it right from gitHub. 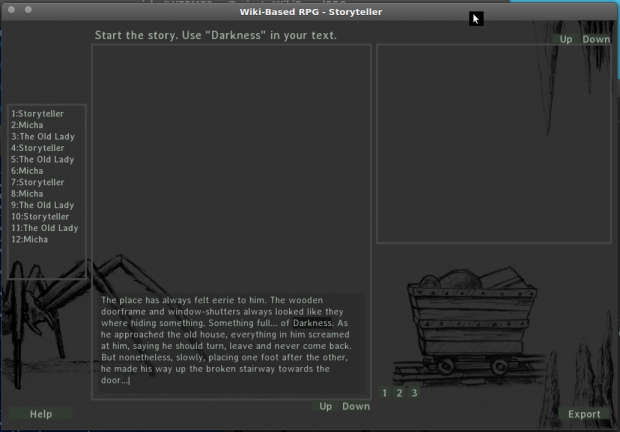 Translators:
Translating should take less than 30 minutes.
This game is best played in your own, native language, but I only speak so many.

I'd greatly appreciate it if you could translate the game into your own language. I tried to make it as easy as possible by putting all the language strings into a simple file.

There's also example files in German and English.
Instructions on translating are in the Readme in the .zip file.
So send me your translations!

Text-Based Role-Playing-Game where each story you play is unique, made up of a healthy mix of influence by Wikipedia, randomness and your imagination...

This game features Swords, Primates, Dishwashers, Maps, Witchcraft, Rabbits, Airplanes, Castles, Dungeons and, if you want it to, lots and lots of Cheese...

Details on how to get the game to run. For running the source code, check out the Readme file.

Source code version. Note: This will run with the current Löve version 0.8.0, but if you want to be able to play in languages with non-standard characters...

Same as the .love file, but packed as an .exe. Simply download, extract and run. No need to install the Löve2D engine for this, but make sure to allow...

Same as the .love file, but packed as an .exe. Simply download, extract and run. No need to install the Löve2D engine for this, but make sure to allow...

This is version 0.5. To run the game, change the extension of the file from .zip to .love, then launch using the Löve2D Engine.

Does anyone still play this? I think someone should make a forum for this

I still play this

how do you start up a server?

There's a description of how to do that in the Game's help files.
If you're playing in a LAN, simply click "start server", find out your IP address (see: De.answers.yahoo.com) and let others connect to it.
If you're behind a router and want to host through the internet, it's a little more involved: You need to forward port 8080 on your router, so that incoming packages know that they should go to your pc. Then visit a site like: Whatismyip.org and give your ip address to those who you wish to connect to your game.

Played with this last night and really enjoyed it! A simple suggestion that could improve usability: add distinct sounds after other users' actions. Right now, there's a chime when you're presented with a choice of words. It would help if there were also sounds for when someone posts a paragraph or a chat comment. Since it can take upwards of five minutes for someone to respond, I often was doing other things. A chime could bring me back to the game.

Also, there might be bug. Every game I play, I'm forced to select "Case Sensitivity" as my first word.

Hm. Whenever you enter a word which Wikipedia doesn't know, you end up on a page like this:
En.wikipedia.org (Notice the link "case sensitivity" down the bottom)
This is a problem, because I do not know how to filter this page yet. I'd have to find something that is on each of these pages in all languages which I can then search for. That way I could instead display "word not found" or something like that.
Try a simpler word to start with. Like "Sword" or "Cave". If unsure, double-check if your word exists on Wikipedia by opening the URL in your browser: en.wikipedia.org/wiki/YOUR_WORD

Thanks for the tip! That'll help a lot. I should note that the server cannot enter an unknown word, as the game rejects it and offers alternatives. The problem must happen when the players enter unknown words in their description. I'll be sure to encourage them to use known words from now on.

Ah, that might be a bug then. I'll check it when I find the time, thanks!

This game is brilliant, it offers up so many different opportunities! Now I just need enough people to play it...