Wanted: The Deader, The Better!

Based on the webcomic by MayelV. The Deadwoods are the most notorious outlaws in the wild west. One day, someone by the name of Rottenburg offers a million dollars to anyone who can kill them but not damage their head. Now everyone is after the Deadwoods to claim the prize!

This week was excellent as I had the entire week off from work. Well, sort of. My manager called me on Friday, but I didn't answer the phone. I know that he called because he needed me. It had to be. He called me like 6 times in the span of an hour, but the heck with that, I have games to make, ha ha ha. So with my free time, I spent as much as I could finishing my game. No, not this game. I have another game that takes higher precedence. This game is just for my sheer enjoyment and I can take as much time as I want, but what I consider my flagship game is to be sold, but frankly, I don't know if it will be a success or not, but I feel I have a responsibility to finish what I started, so I buckled down and tried to finish the art for the game. This entire week was nothing but drawing and man, did it stress me out. I would end up being sore and tired from it all, but I finally did it. I finished all the art this week, thank goodness.

As for The Deader Project, this game was not affected as much. Like I said, this game isn't a big priority. Yeah, I want to see it finish, but higher priorities are present, so if it needs to be, I will not work on this game if it comes to that. I work on this game at nights, usually 9pm till midnight and in some cases even longer and if I feel too tired, I won't work on it. You pretty much get the idea. However, I will promise this: the game will be finished. It will be completed some day.

Now that I got that off my chest, time for game updates. The level 4 boss is now being worked on. 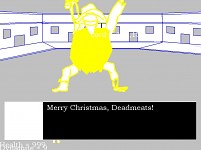 The first 3 bosses were pretty simple, but this one is pretty complicated. Instead of a single object, every limb, its body, and head are an object. That means you can shoot at them individually. My original intention was to make ragdoll physics for the boss where every part of his body was a separate piece. He was to have 14 pieces in total but unfortunately, the version of Game Maker I am using does not support ragdoll physics, so I had to simplify it, which is fine with me as it makes programming the boss a lot faster. All joints are together and I made an awesome intro for him, so now it's time actually program his attacks, which is easier said than done, but I'm progressing nicely. So far I made him stomp the ground (which was unintentional but I kept it) and brandish his gun, though not necessarily shoot it, but that's what I'm working on as of writing this blog post. There are plenty of other attacks but I'll keep them hush hush for now, but after all is said and done, this boss is going to be awesome.

Work continues with The Deader Project as I am now working on level 4. This is going to be a zombie level. Unlike the previous, or even the next levels...

The Deader Project comes to IndieDB to spread the word to everyone about my game.

Twitter
Tags
Embed Buttons
Link to Wanted: The Deader, The Better! by selecting a button and using the embed code provided more...