Just Cause 2 is a sandbox-style action video game. Its gameplay is similar to that of its predecessor, the player is free to roam the game's open world at will, not having to focus on the game's storyline all the time.

It has been a long time coming but we are finally here. Just Cause 2 Multiplayer has been unlocked and released on Steam. 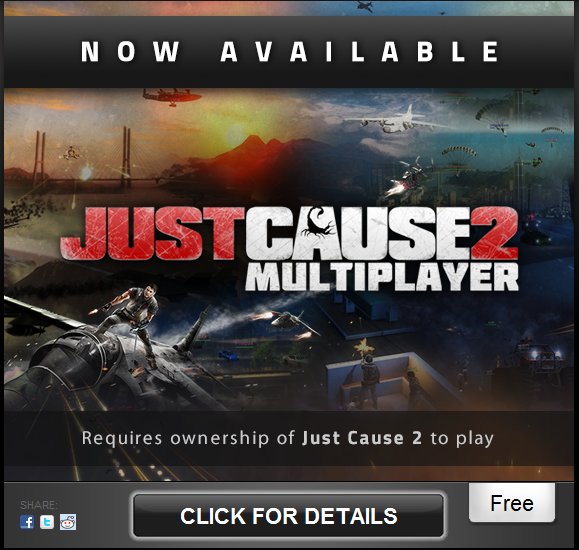 What does mean for the JC2MP community? Well, firstly...

Host your own server!

You can now download the server binary and run it for you and your friends or open it up to the public! Choose from a range of the packaged scripts we have been testing in the beta tests or...

Write your own LUA script!

Now that you can run your own servers you can now also write and test your own scripts and game modes using our LUA interface. Do you have an awesome idea for a game mode? Want to improve the nametags or send your car/boat/helicopter/self hurtling into the sky at light-speed - You can now do all of this using the mod's LUA engine. Head over to the JC2MP Wiki for more information.

Don't feel like hosting your own server? Head over to our server list on the website or just launch the game for the in-game server browser.

Notice your friends playing JC2MP? Want to help them (or blow them up with a G9?) you can now join the same server they are in through Steam's "Join Friend's Game" feature much like many other Steam Games.

If you just want to come in for a chat or share your experiences you can head over to JC2MP Forums or have a chat and ask a question on IRC.

Efficient and easy-to use modding tools for Just Cause 2, released by Gibbed.

Merry Christmas, announcing the best mods of 2013 as selected by you the players!

Compilation of several mods for a Just Cause 2 fully remastered with a new environment and high quality textures.

For those who felt "Can't Stop The Police" was not enough. This mod gives the military a much better chance of killing you.

Little mod that makes the police come after you more aggressively. Added APC's, ATV's and military jeeps. This does not increase the rate at which heat...

do you need the game to play multiplayer
\

Kinda amazing how the moddb page for this game is empty of mods.

On the other hand, the site where you download mods for this game is the wrost piece of **** I have ever seen.

It amaizingly restricts you to 3 mods per 24 hours to download. Really, In all my gaming history, this is the worst joke I have ever seen.

Just Cause 4 Third Person Shooter
Tags
Embed Buttons
Link to Just Cause 2 by selecting a button and using the embed code provided more...