Valham - Will of the 7 Swords

Valham - Will of the 7 Swords is a 2D Side Scroller Action RPG game currently pre-production.

The story follows Will, a homeless boy living in a village called Valham.

Despite being neglected by the entire town, a Baker named Balgris takes Will under his wing offering him odd jobs in exchange for food.

Valham is one day raided by a roving group of Mooricks, slimy creatures that suck the life out of living things to poses their bodies. Buildings burn, villagers are killed, the whole town is thrown into disarray.

Will rushes to the Bakery, only to find that Baldris is badly injured. Baldris arms Will with a sword in an effort to give him a fighting chance against the relentless Mooricks.

Baldris then sadly passes away.

Now with nothing left to Lose, Will decides to fight back and track the invaders back to their settlement, an ancient dungeon that once belonged to an evil King.

It is here your adventure begins...

The Importance of Wall Design

The Importance of Wall Design

When designed correctly, walls can tell fascinating stories about the people who built them.They give us an idea of the technological advancements used in their construction, as well as clues to some of the events that may have shaped them.

When looking at a mud hut, one might think they were built by hunter-gatherer tribes using rudimental tools and techniques, whereas a fort made of large stone blocks might suggest its builders had a high degree of skill, technology, and also military prowess.

This article lists some of the stonework research I did to help find the right look for the first dungeon in Valham.

To keep things simple, we will only look at the exteriors of 3 structures I found most useful (else this article will have no end). I'm pretty set on the castle ruins theme, so that helps narrow things down a bit.

An Iron Age Broch
Our first example is a 1st century AD Broch built in Carloway, Scotland. The most noticeable observation is how the weathered structure and foliage covered surfaces shows off its age. Its dry stone walls use sandstone slabs that have an infinite range of form variations and shades of colour.

Any woodwork used for the roofing and upper floors would have perished, leaving behind the building's oddly shaped remains.

It's really quite moving to think how each stone slab was carefully placed by hand centuries ago. 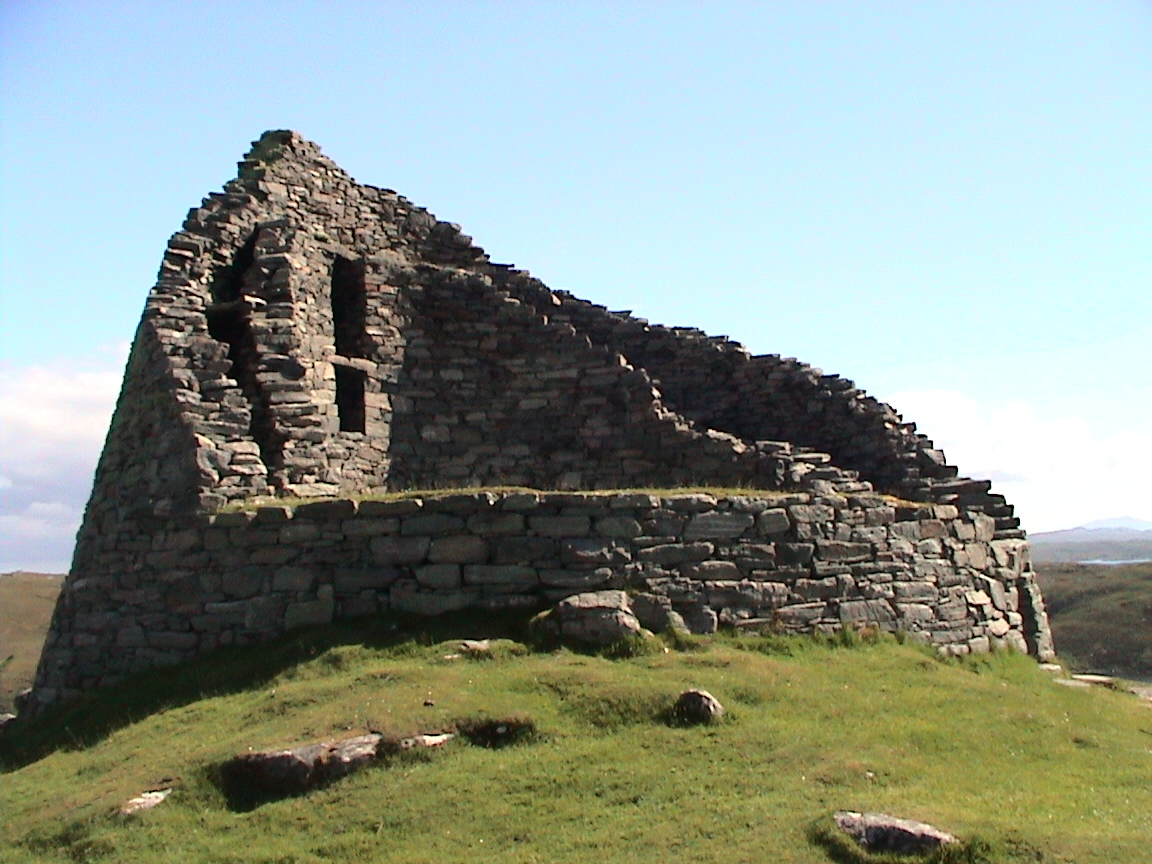 Machu PicchuThese huge stone blocks surgically cut to slot together are found in Machu Picchu. They really give off the impression they were laid using some kind of alien technology. Though in reality, they were build by incredibly skilled people using highly advanced tools.

As with the Dun Carloway Broch, I love how plant life can be seen growing between the cracks of each block. However, what I love most of all is how big the blocks are. These large surfaces will certainly help our character pop.

Château de Vincennes KeepThis 14th century keep could have been pulled straight out of a Disney movie.

What drew me to this example was the building's form and diverse brickwork. It has cones, cylinders, cubes and all sorts happening. Château de Vincennes was built and developed over several hundred years and it clearly shows.

Each wall protrusion creates interesting detail. Rather than being completely flat (remember the Friendly Arm Inn from Baldur's Gate?), they break up large surfaces which is something I definitely want to carry over. 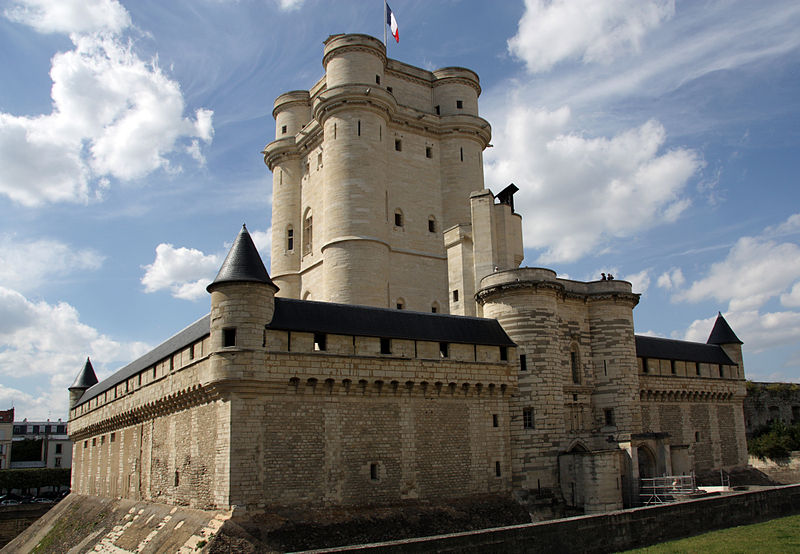 I want the people who built our first dungeon to have been skilled at masonry, kept an ordered society and worked decorative embellishments into everything they produced. A civilisation that closely resembles the Romans and possessed weapon technology dating back pre-gunpowder ages (I always find that guns tend to spoil fantasy themes).

This leaves me with the following direction for our walls:

Large stone blocks will also create less detail and noise on screen, which will help our player and enemies stand out from the scene.

First attempt
The image below shows the exterior of the dungeon using large blocks (relative to the player). Their modular design allows organic foliage to break any uniform patterns and really stand out.

I really like this design; however, I feel they could get repetitive quite quickly. 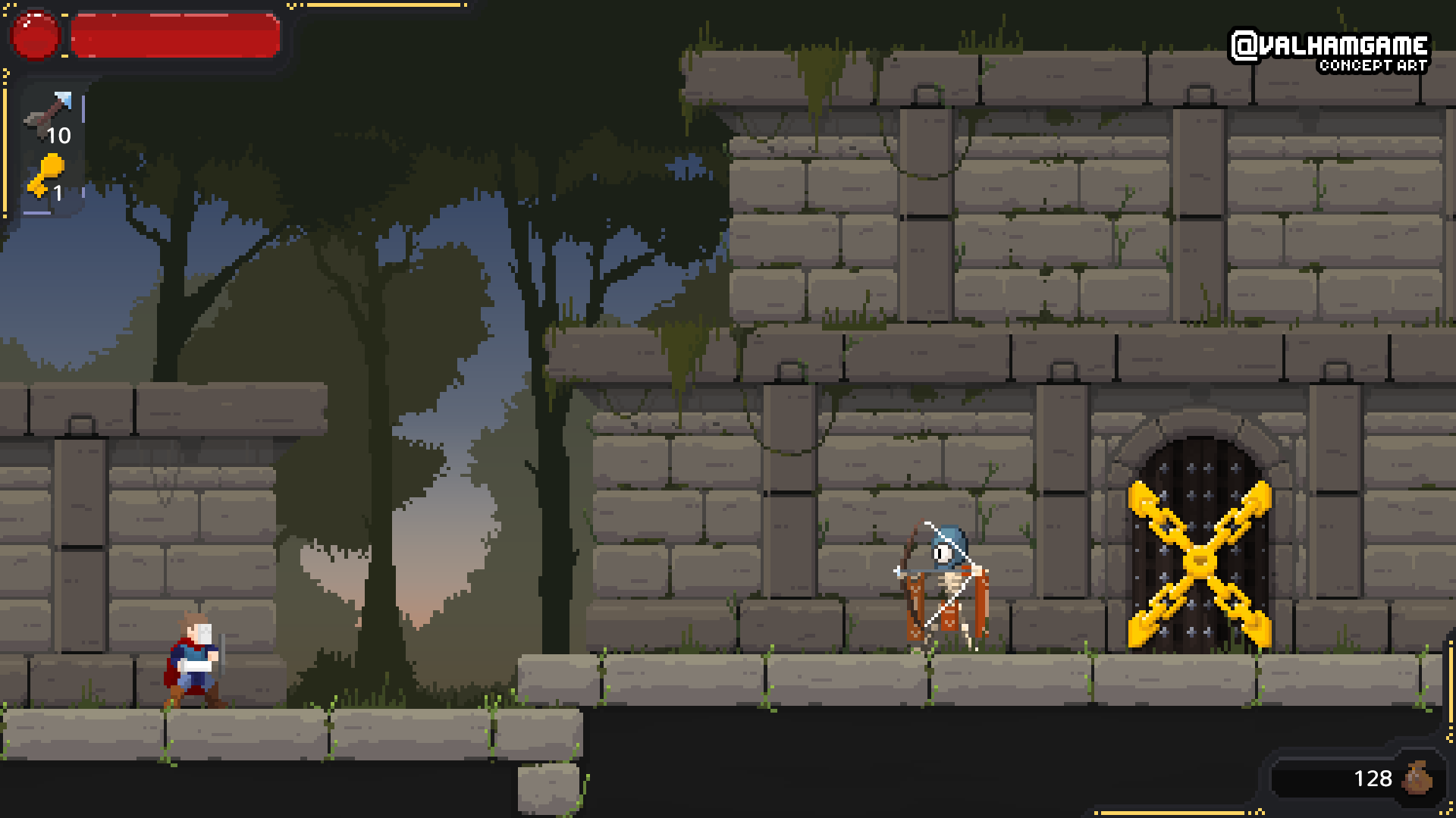 Second attempt
So I tried larger blocks with flatter surfaces. They certainly create the impression of something grand that's been built. 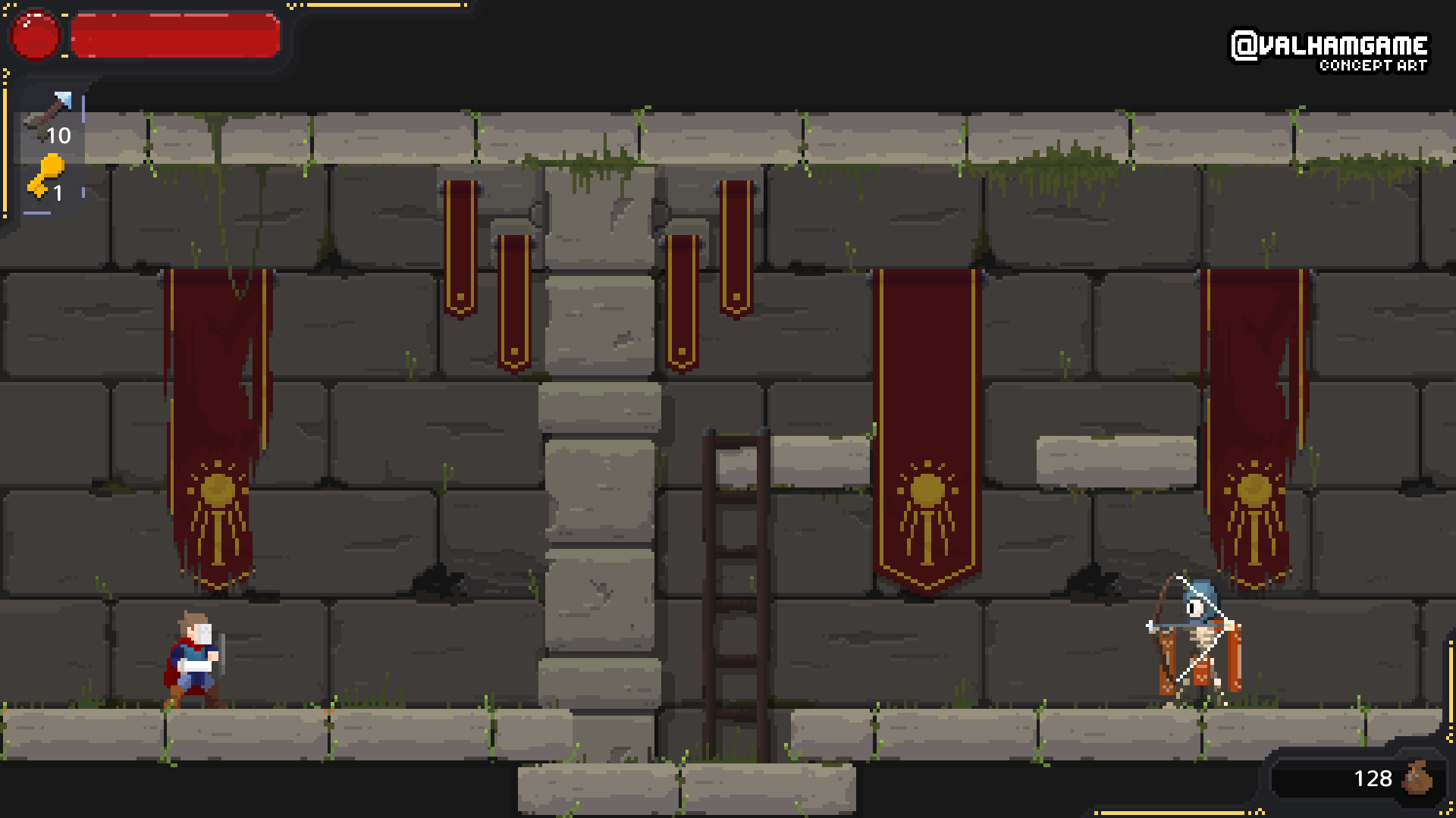 For the reasons above, I will go forward with this design. They serve their purpose and above all are ridiculously fun to make!

A Little Bit Extra
Just before you reach the castle, you'll also come across a Stonehenge. This is to create the impression that the people who occupied this land were no strangers to building megalithic monuments. I might find a different arrangement for them though... 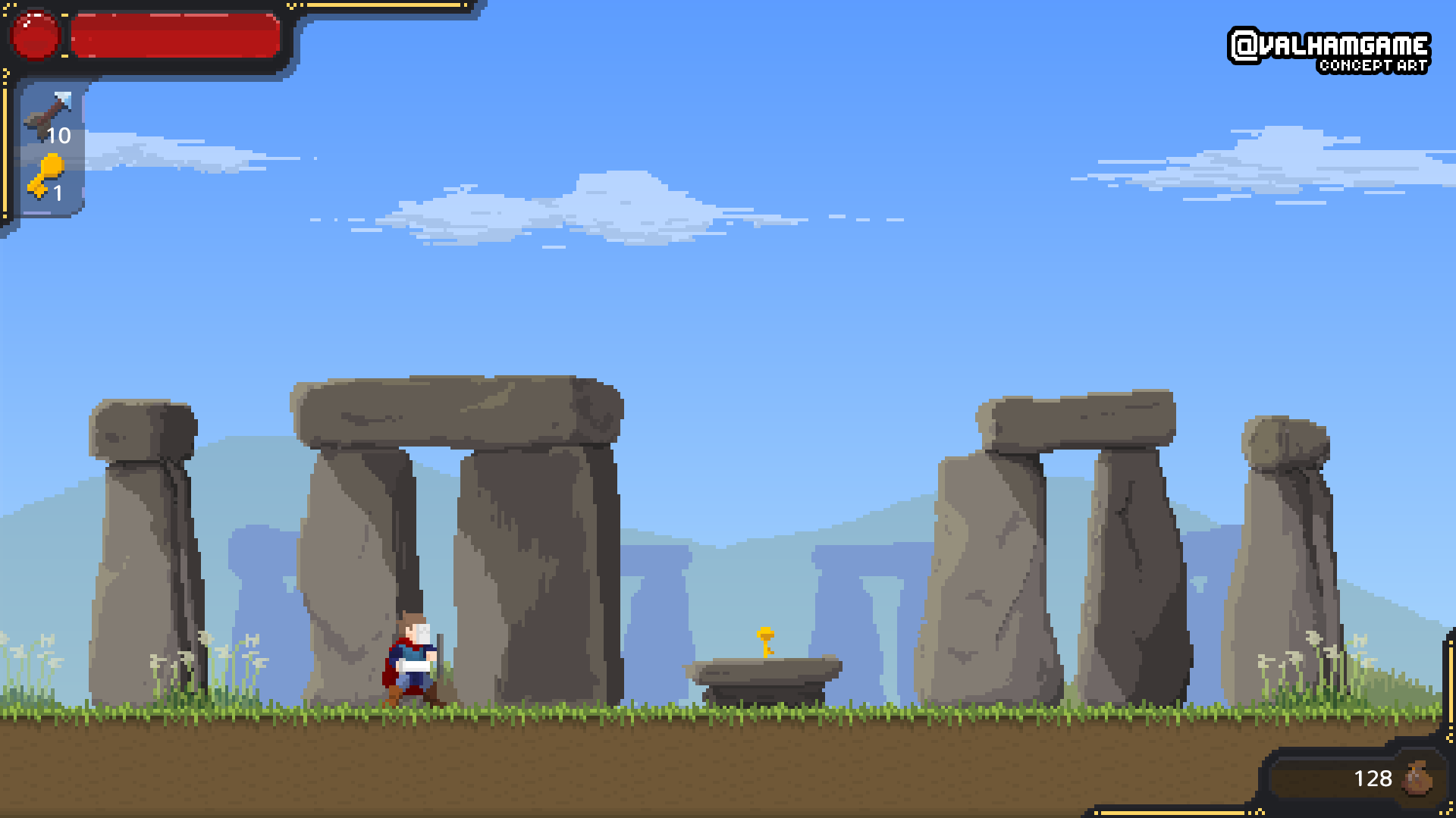 I think the next step here will be to focus on prop design for the castle. Pots, tables and other breakables that could help strengthen environmental storytelling, but also be fun for the player destroy :).

A blog post documenting how I explored different UI art styles to help define one for Valham.

Hey there! I just noticed your lovely looking game and would like to speak with you about potentially publishing it. Let me know if interested! alex@gamesplanet.com cheers

Indie
Tags
Embed Buttons
Link to Valham - Will of the 7 Swords by selecting a button and using the embed code provided more...