You can't run from the past. But what if you could change it? Tumbling Apart is a game of one man's guilt over the harrowing fate that has befallen his sister, and his desperate journey across time to fix it. Inspired by other narrative focused games such as "To the Moon" and "Life is Strange," this artistic 2D RPG tackles themes and raises questions previously unexplored in the burgeoning genre.

*Special note to the Indiedb community and those who do not know what Tumbling Apart is all about:
If you haven't heard the pitch, we'll just toss it to you now. If you already have, you can scroll down past the first image.

In Tumbling Apart you live the story of Isaac, a man riddled with guilt over the terrible fate that has befallen his sister. When a mysterious power grants him the ability to re-experience their life and former tribulations, he must harness the potential of forever altering their tragic destinies.

Inspired by other narrative focused games such as To the Moon and Life is Strange, this haunting journey tackles themes and raises questions often ignored in the burgeoning genre. Explore the human cost of abusive relationships, alcoholism, drug use and abandonment. Witness the devastating effects of personal loss transform into a hope born from the unlikeliest throes of darkness. Pandora's box will be opened with Tumbling Apart.

Throughout development we have been focused on one goal: To deliver a game that will stick with you. Deep down within your gut. Long after you finish playing it.

All Original Art, Fresh News, and a Video

Seeing as how our old website looked like it was pulled from an internet time capsule during the high-water mark of Geocities, we're pleased (relieved, really) to have the new version live. In before any 90's kids are like "Haha! There's no way it could be that bad." It was. Really. Check out the new one here: Tumbling Apart Website

If you've been following the game, you may have noticed that a lot our graphics up to this point have been placeholders. Thankfully, we're at a point where we can start incorporating our own art. Gustavo Santos is at the helm of our sprite work, and we're happy to have him along. He's in the midst of working on Isaac's various looks through time, and it's coming along nicely. McKenna is to follow soon, with an emphasis on clean and simple design to facilitate animations which have limited pixels to work with. In spirit with the new ideals of the website, we aren't going to fill it with old images that don't represent what the game will be upon its release. But if you're curious and want to see how the progress is going, the pics are out there. They're even here on indiedb. Just beware of graphical cringe. 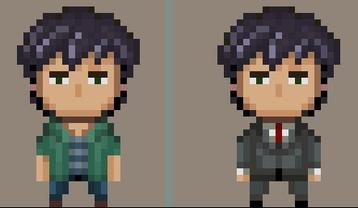 While Tumbling Apart's focus is the narrative (and we believe it will deliver hard on that point), we still desire that the game have at least some visual flair. Ultimately, there will be thousands of hand-drawn animations and dozens of unique environments to help immerse you into something that will stick with you for quite some time. And if you've been following development you've probably heard us say that before. But there's a reason we reiterate it so much: That's the numero uno goal we've set from the get-go. Tumbling Apart is going to be one of those games that you find yourself randomly reflecting over in bed, three months after you've finished it.

In closing, let's take the opportunity to go over the various platforms where you can snag some updates. Aside from the official site, we are on Twitter, Tumblr, Facebook, Indiedb, and Youtube. You can access all of the respective links by clicking the corresponding buttons at the top right of our website. Twitter will have the most frequent updates, for those of you interested in the minutia of the development process, but if that isn't your cup of tea, check the other portals. Subscribe to us on Youtube to keep up to date on trailers and game discussion, and to watch the occasional "how we did it" vid. Sometimes they aren't half bad :^).

Oh, and speaking of how we did it videos, here's a new one showing how the animated hand from hell was made using images of my real hand. A cool little video, if you're in to that kinda thing.

Have a great day all,

Tumbling Apart has been Greenlit!

Thank you everyone for the support! It's been incredible!

Nobody wants a game to be spoiled before they play it, but some people have mentioned we've been a little too vague with Tumbling Apart. This short video...

A new video is up explaining what makes Tumbling Apart unique in an ocean of independent games.

Tumbling Apart: Then vs Now

The latest devblog takes a look at the old vs new Tumbling Apart, and how visuals serve as a vehicle to increase immersion in a story-driven experience.

The lag should have been fixed on the latest update. Thanks again for the info!

Thanks for the feedback! We're gonna fix that:)