In essence, Tribe of Pok is a tribal survival simulation/strategy game inspired by games such as Dwarf Fortress and the Cultures series. A tribe of hunter-gatherers attempts to eke out an existence in a savage environment. Help them become the most prosperous tribe in the area by constructing the great Megaliths of the Stone Age, building, crafting, hunting and gathering. As you become more prosperous, rival tribes will take notice, not all of which will be homo sapiens! 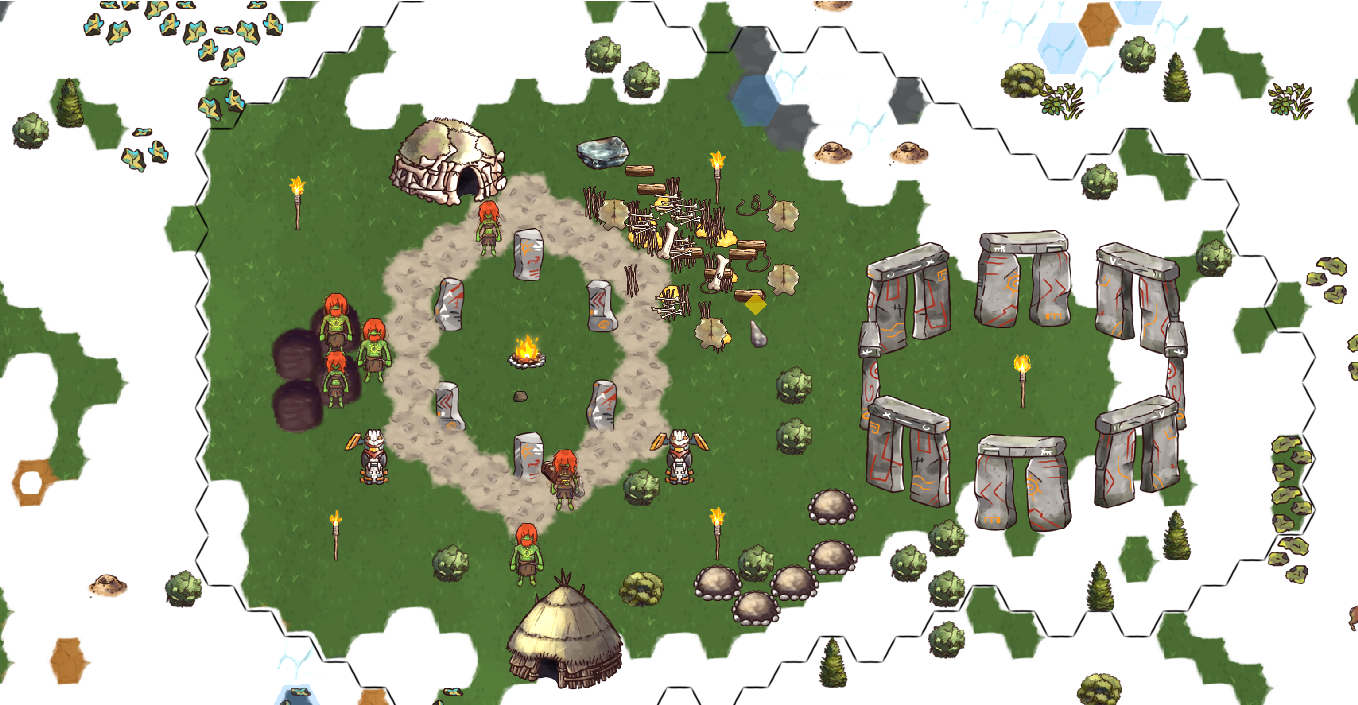 Simulated Natural Environment
The natural environment is heavily simulated. Cut down all the trees and eventually they will stop regrowing. Use up all the water in a pond and it will be dry until the rains return.

Day/Night and Seasonal cycle
Winters can be harsh with below-freezing temperatures, so keep the camp fires going to prevent hypothermia. Summers aren't much better, with the possibility of heatwaves causing strokes.

The Circle of Life
Plants absorb organics from the soil as they grow, produce fruit during maturity and return organics upon death. Animals travel in herds around the map trying to fulfill their own needs.

Nature is the Ultimate Provider
Almost everything you need will come from nature. Plants are harvested for their produce, animal carcasses are butchered for materials and rocks are broken down to make tools.

Craft the Tools of Survival
Craft spears to defend against wildlife, axes to cut down trees and awls to make clothing. Some tools are even multi-functional. The stone knife speeds up fire creation, but can also be used as a weapon in a pinch. 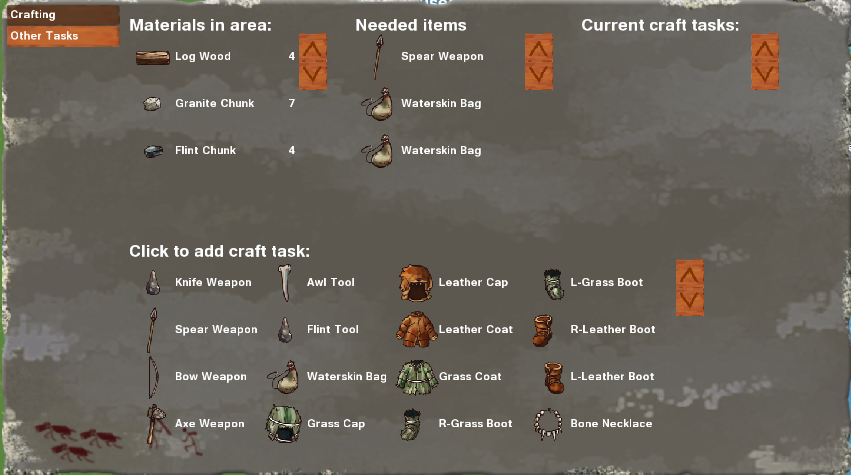 Stop the Decay
Build pits to slow down food decay. Don't place it too close to camp, or the warmth from a campfire will speed up decay. If the pit gets wet, any food inside won't last very long either. It's all part of the deep simulation that drives Tribe Of Pok.. 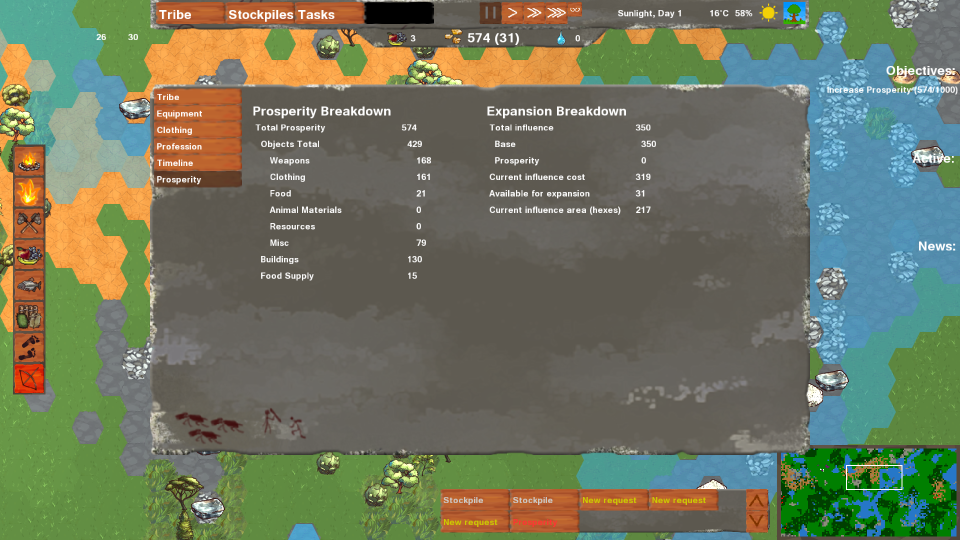 An update has been released with a new Soil Mound building and various other improvements. Here is an example of a way you can use the new Soil Mound to dam a river: 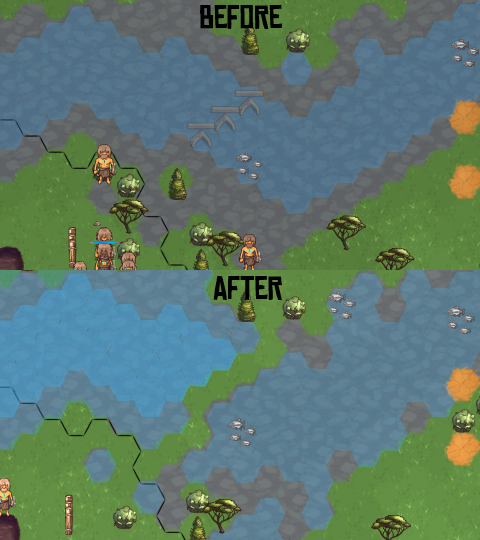 Tribe Of Pok has just released on Steam!

Tribe Of Pok Release version 1.00 is out on Steam (and itch.io)!

The game is releasing on Steam on the 23rd August, so we've got the launch trailer and last Beta update here!

This update is quite substantial, lots of changes/additions made to make things clearer for new players. Also included is better task prioritisation...

Steam launch and Release 1.0 on 23rd August! Also some details on the Beta 20 update.

Download, unzip and run Pok.exe. A tribal survival simulation/strategy game where you guide a tribe to prosperity through building, crafting, hunting...

Download, unzip and run Pok.exe. A tribal survival simulation/strategy game about a tribe of hunter-gatherers, known as Pokians, trying to eke out an...

Download, unzip and run Pok.exe. A tribal survival simulation/strategy game about a tribe of hunter-gatherers, known as Pokians, trying to eke out an...

Hello we will be able to level up civilization? going through the ages change is inevitable. if you do it, its very imporant the mastery of metals that allow the development of superior structures and tools, and allows for a change in the ways society works and its bound. ( ex: the metals allow for greaterer production and dominion of the land, thus making humans more sedentary) Plz make the game more in the lines of Dwarf Fortress the story telling is amazing, but i don´t understant nothing how to play hehe xP. Good Luck friend

Hi Drokan, there won't be leveling up of the civilization, it will be only in the Stone Age. The main aim of the game is to increase your prosperity by growing your tribe.

This game is actually inspired by Dwarf Fortress, which is why I have such a heavy focus on simulating the world. I tried to create a world where things can happen e.g rivers can flood in Spring and ruin your food stockpiles if they are in the wrong place. Or freeze in Winter and allow animals to walk across them. It helps to build a story of what your tribe has been through to survive.

Looks really interesting. I will follow you on twitter and try out the alpha as soon as it is aviable.

Love how active you are at updating this!

Thanks! I've only recently started being more active in posting things, glad it's working well.

The game is great but i think u nned to detail that tiles a bit more.

Thanks for the feedback! Yes, art is definitely not my strong point. I have always made the sprites just "good enough" to show the idea so I can get back to coding, which is the fun part! But I'll work on improving the art now as well, stay tuned.

All professions look too similar to each other - maybe different outfit colors would help?

Hi, thanks for your comment - those images are actually for the male and female and not related to the role of the person. I briefly considered making the human sprites role-specific but put it on the backburner as a cosmetic change. Although I can see how that would make it easier for tribe management as it would be easier to tell at a glance who does what on the playing map, and will definitely put it in at some stage!