Games for May | TBD

The Universal... is an online game for PC. Explore the galaxy, play on planets or make your own world with your own game design. Various game types are available - including uniquely complex social economies - and you can play it all for free. If you're the creative type you'll find extensive in-game tools and a powerful scripting engine to let you create new game ideas. Or you can just mess around and blow each other into ostriches. It's all cool, whatever.

The Christmas update of The Universal introduces loads of new worlds to play on - including KILLING PUNY HUMANS - plus new prize round tournaments where you can win Amazon gift vouchers if you help us test the latest Alpha!

SPACE is BACK!
The space trading/combat game (Elite-style) is back, with a new cockpit, new ships, new space
drives and effects. We've also been working on a lot of back-end and graphics engine improvements as well as building a bunch of crazy new worlds for you to play on.

Here's a quick video tour of some of the latest stuff:

New worlds to play on!
There are many new worlds available in our Xmas 2014 update:

Demolition
Kill the puny humans in your giant tripod of death! LAUGH as the puny humans flee from your gigantic death machine. CACKLE as you race to rack up the most kills. GRIN evilly as you... well you get the idea. Can you play keepie-uppie with their squishy little bodies? Oh yes, you can... 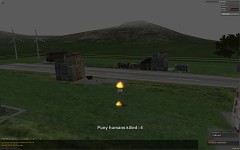 Magicthumb
A strange social game about crafting and using potions - will you turn your opponent into an ostrich before he transforms you into a yukka? Also featuring: swimming! And... coracles? 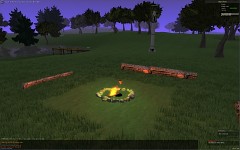 Guntrac
Weld a plasma cannon to the top of a tractor and go to battle on this team combat world. Protect your base, and destroy the opposing team with rockets, seekers, cluster bombs and the dreaded tomahawk missile... 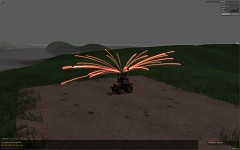 And more...
The galaxy has Civ-style worlds, crazy economy worlds, desolate wastelands and player-run worlds in various stages of completion... see what you can find! 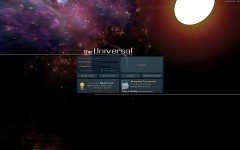 The Universal client 0.66.0 has been released today, focusing on a new 'cloud' hosting system for worlds and improved in-game world editing tools.

Civilization is booming, towns and forges have been built, horses are being reared and theres enough bread for everyone.

The Universal enters a new phase in its historical quest back to space, with a complex economic civilization starting to form.

After many years of simple living, realization dawns...

This is the current development/alpha version of 'The Universal..'. The game engine is well advanced and includes network features (real-time gameplay...

The playable client allows you to sign up for and participate in the game, but there are no details on the changes in this release.

You will always have my vote, keep up the great work!

This game promises so much, but I've noticed an alarming lack of submarines!
This looks like a really great game but it's a shame it will take so long to create...

Would love to get it done sooner, but ya know.. work, kids, life.. Submarines, though.. alarming indeed, good point! Noted! :)

Atleast you did the planet thing OwO

I'm getting there :) Give it a few more months and we're rolling, promise.

For some more videos, old ones, check my Profile -> Videos.

Twitter
Tags
Embed Buttons
Link to The Universal... by selecting a button and using the embed code provided more...