The Siege and the Sandfox

A shining city lies besieged in the heart of a vast desert. As the moon rises over the royal palace, a notorious thief watches the king die at a traitor’s hand. Discovered, falsely accused, and thrown into the labyrinthine dungeons, the thief must escape to tell the tale, else the city will fall.

Master dynamic acrobatic abilities to traverse the cavernous depths of an ancient underground prison, evading detection and avoiding certain death at the hands of a sand-borne evil. Fight for your city – foil the enemy’s attempt to strike at the heart of the kingdom.

The Siege and the Sandfox is what we like to call a ‘Stealthvania’. By infusing stealth into the typical Metroidvania experience we’re creating a unique twist on the ever-popular genre. Lovingly realised in an evocative 2D art style, with great attention to audio and presentation, we are building a beautiful world for our players to enjoy… from the shadows.

We've been focusing back on full-time development following Develop and Radius, as well as working on a few TOP SECRET things that will be shared when the time is right.

Our designer Chris is currently split between two tasks - AI improvements that improve our stealth gameplay, and fleshing out the outer edges of the world map. 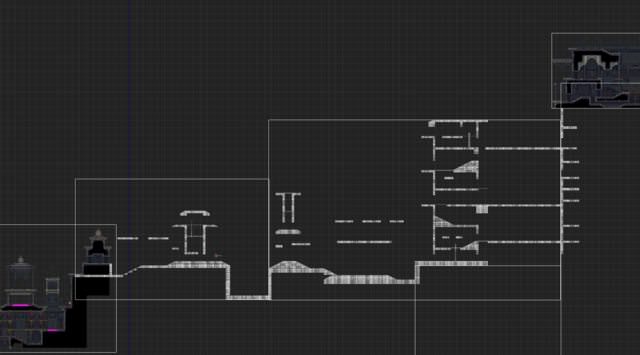 We've been working on making rooftop sections at the very top of the map. This is an area we're sure will get lots of iteration, because we’d like a player who’s really mastered the moveset to be able to get across here in one fluid motion.

To start with, Chris is just blocking out the space, seeing what feels right, and how to sensibly manage the height change between the two neighbouring sections. Currently it feels pretty good to climb the towers internally, but not so good from the outside. We'll be focusing on breaking the outline up a little and trying to add some more interest as you travel between them.

While doing this, we've also started adding to the wishlist of future player controller improvements. Things like being able to interrupt some animations, and some ‘feel good’ things like caching of jump inputs, and allowing a little tolerance when making jumps off ledges.

We've also started to prototype some of the movement features that’ll be unlocked during the course of the game, but we’ll save that for another update

Meanwhile, over in AI town we've been trying to work out the best way to approach doors.

The current implementation uses nav link proxies, and actually works surprisingly well - kudos to one of our coders, Rex, for digging into these because Chris was having difficulty understanding how to make them do anything useful!

However, we're trying to take a pretty tough stance, that as much decision making as possible for the AI should happen as behaviours within the behaviour tree. Currently, the use of nav link proxies breaks this rule pretty fundamentally. From the behaviour tree perspective, the AI just uses ‘move to’ and either reaches it’s final destination, using doors along the way, or doesn’t make it.

We're pushing for a solution that lets us setup lots of fall backs in the tree to allow for things like unlocking doors, breaking doors, and anything interesting we might come up with in the future. We've been heavily inspired by the examples given in this Gamasutra article.

To that end, we’ve mocked up our own version using placeholder nodes in a behaviour tree:

Well, that’s all for now, we’ll provide another update when some of these things are implemented. Fingers crossed it works as well as it does in our heads!

Distortion With An Orthographic Camera

Artist Ed Duke-Cox explains the development of our sprite talking animations, and how and why we went from static bodies with only mouth movement, to...

The Siege and the Sandfox Pre Alpha Promo

This is a 30 second pre-alpha teaser promo video, created for our stand at GDC 2016.

The Siege and the Sandfox Press Kit

A simple press kit, including some early screenshots, logos, and company information.

Indie
Twitter
Tags
Embed Buttons
Link to The Siege and the Sandfox by selecting a button and using the embed code provided more...