In 'The Mims Beginning' game we play as a ruler of the Mims colony. The Mims are sympathetic creatures travelling through the outer space in search of a friendly world to settle and colonize.

During the intergalactic journey their spaceship was destroyed by an asteroid and the crew was forced to evacuate on the nearby planets which were not always friendly.

Player’s goal is to perform various tasks due to reconstruct the spaceship. We can make this task easier by the proper development of our planets.

The basic element which is necessary to the colony existence and development is energy. This energy is necessary to rebuild the Mims’ vitality used while performing work and proper functioning of the infrastructure. It is produced in a generator for Biomass derived from special fruit processed in the Extractor. Part of the energy can also be obtained from the flow of winds thanks to correct placement of Wind Turbines.

The tasks performed by the Mims should include the expansion of the colony and picking up the Bio fruit.
Some of the Mims act as a protection against the dangers lurking from various creatures attracted to our planet by scent of fruit and animals.

As a ruler you can create the Defensive Mims and we also have Psi power to our disposal, some of which can be used for defence against these creatures. Mims knowledge allows them to create animals which diets are appropriate sets of fruit.
Grown animals can be sent to ‘Space Market’ and exchanged for crystals necessary for further development of the colony.
In order to grow fruit for the animals we need to sow seeds from various plants species. An example can be an exploding plant that throws fruit around. An important element is a planting site.

A clever ruler is able to use topography thereby avoiding excessive scattering of fruit all over the planet. In case of a bad placement we can lose some crops due to fruit rolling down the edge of the planet.

An equally important factor making loss inevitable would be allowing fruit to rot if it were not picked up on time.
In the game we can develop buildings, plants, acquire new Psi powers, as well as learn our Mims new skills.

As the ruler of the managed colony we can govern from the Psi Tower which greatly reinforces our supernatural abilities. As a result we have a range of abilities which can affect the environment of our planet.

Among other things, it becomes possible to influence the development of vegetation growing on the planet. In the case of excessive accumulation of fruit we are able to reduce it with the adequate power. We also have the ability of destructive nature. One is the explosion of power that we can use for defending against oncoming predators and keep them away from our subjects. These are just a few of the aspects of the thriving colony but there are many more such as Biomass storage problems, starving animals, and preparing for upcoming events and disasters.

There are two game modes to choose from. An Adventure mode telling about rebuilding the damaged spacecraft and a Free mode where a player develops a colony without any specific objectives. In the Adventure mode we struggle with the problems another Mims survivor has to deal with. They will be forced to fight not only with the geological difficulties on encountered planets, but also the threats of cosmic events. During their adventure they will come across the mysterious worlds, full of unusual and bizarre creatures and sinister plants standing in their way to find the remains necessary to rebuild the ship.

Some of our groups of survivors find themselves located in places so inhospitable that their very survival will be considered as a success.

As “The Mims Beginning” is under development there is still a possibility of change, therefore we are open to ideas from the user community.

Become a leader of Mims colony!

The Mims - lovable and funny creatures roaming the galaxy in search of new places to colonize!

After a fruitless search, their intergalactic spaceship was hit by a
meteor and smashed into pieces. Saved by rescue capsules, scared Mims
land on the not-so-friendly-asteroids. The survivors reach flying
islands where variety of challenges await them. The Mims decide to
colonize by starting farming business on newly settled asteroids and
they want to find their place in the outer space. The Mims have got PSI
powers which help them follow their leader’s orders and do some work.

As their leader help them cope with problems and survive in this hostile environment!

We are a duo of dreamers with different perspective on the world.
One day we decided to make a video game, and surprisingly, we did. Our
friend joined this crazy idea and made a magical music.

Now we only need your votes to show everybody that dreams really come true and guys from nowhere can make something big. 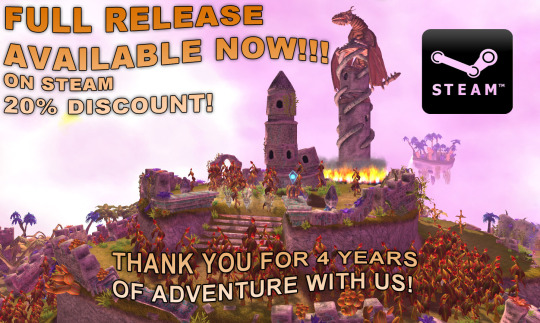 FULL RELEASE LAUNCH! :D
The Mims Beginning Full Release is now available on Steam store with 20% discount. Thank you for amazing 4 years with us.

You supported us so much by responding on our work, post, remarks about the game, help in promotion and translation. Honestly our game is balanced and optimized because of you, amazing community! :) We hope that our game will give you some great experiences and fun :D

After nearly three years in development, The Mims Beginning is finally available on Steam Early Access. It is truly an extraordinary time for us! :)The...

Just write here on reddit comment with your idea of predator. The best idea (comment with the biggest number of points) will win. We will create that...

We have been GREENLIT !

Our god-like game have been greenlit - free beta demo with 3-6 hours of gameplay to download. Left only 5 days of our campaign.

Nice! I thought you hid in a cave. Nice release!

Problem with the demo, the bird you grow never actually grows, it just hops around for awhile doing nothing after you build the spaceport (linux)

Thanks for report that, we will fix that but I think if you will play again it should work. It could be one time - problem.

Hey just made a quick little first look of this game. Got to say I really enjoyed playing it.
Here's the video: Youtube.com

This is coming along nicely.
A demo would help spread the word.
Agreed with carlqua V

THank you :) More info here on our campaign :) Indiegogo.com

This game looks like an interestingly nice strategy and I'm wondering if you have a demo planned, I saw you on green-light and was disappointed to not find a demo, since the game looked good I voted anyway.

Thanks for comment , of course demo will be available first for press , bloggers , youtubers , next for everyone to play :)

Twitter
Tags
Embed Buttons
Link to The Mims Beginning by selecting a button and using the embed code provided more...