. We want to achieve a ‘sandbox' vibe in a 2D game, a sensation of continuity, cohesion and hugeness. It will be released for Windows, Linux and OSX.

You play as Kepler, the main character, who is always accompanied by his loyal partner Xana, a personal assistant who helps him to communicate with everyone. They have a spaceship which will let them navigate through space, collect trash, explore planets... and all of this while they are dealing with enemies and solving puzzles. On some planets, they will find entrances to 2D platform stages. In those stages Kepler will need to use his agility to deal with dangers, and his weapons to get rid of his enemies.

We are highly inspired by classic platform games like Megaman, Super Mario and Metal Slug, or most recent and prominent platform games like Rayman Origins/Legends and scrolling shooters like Tyrian or Raptor. Besides, we love classic science fiction sagas such as Star Trek and Star Wars (the original trilogy, of course) that have worlds full of strange civilised races. We are also fans of science fiction novels such as Foundation by Isaac Asimov, Brave New World by Aldous Huxley and Ender's Game by Orson Scott Card.

After The Last War, the entire galaxy was filled with rubbish, and that's why the entrepreneur, philanthropist and scientific Nikola Hobbes founded the ‘Intergalactic Trashmen' company: to recycle tons of reusable and valuable materials spreaded throughout the galaxy.
Kepler and Xana work in that company, and the game will take you with them in their journey through space after they find their friend and mentor, Goyold, seriously injured. He was investigating one mysterious factory that had appeared in the galaxy with no clear purpose when he was attacked. Kepler and Xana will continue Goyold's investigation, looking for factories throughout the galaxy to uncover the mystery, and they will find themselves involved in a conspiracy of epic proportions. 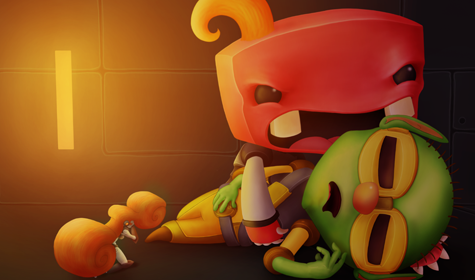 The storytelling is the spine of The Intergalactic Trashman, our objective is a story driven game. We've written a lot of background for every main character of the game and we've connected each character story to create a cohesive universe, full of schemes, personal stories and politics. If you want to know more you will need to accompany Kepler and Xana in their journey!

Weapon and gadgets
Kepler has several abilities to deal with the stages characteristics such as the dash and the rope. Both help him to reach high places or to avoid chasms, but since the dash is not infinite, the combination of both of them will be a powerful help.

Kepler has weapons to fight against his enemies, the evil jelly army, such as: a pistol, a shotgun, an assault rifle, grenades, mines,etc. He also has a decoy to distract his enemies or to get rid of them silently.

While Kepler and Xana investigate the galactic conspiracy, they will be able to interact with tons of people in order to get missions to do, or valuable information for their research. For this purpose we've created the conversation system.With it, they'll be able to know who's behind the mysterious kidnappings that are happening in Zambik'Thi, and even figure out what's the favorite dish of planet Finberg's nomad.

The conversation mechanic is simple, you can't choose what to say, but the things the others say to you will vary depending on the events of the game. Sometimes they will offer you missions to do, and sometimes they will just talk about their lives and concerns.

The investigation will take Kepler and Xana through differents sectors of the Intergalactic Alliance’s outer edge and all of them will be able to be deeply explored by our heroes.

Each sector of the galaxy act as a mini-sandbox and as a part of the whole world. All of these sectors won’t be fully unlocked at the beginning of the game. Kepler and Xana must solve puzzles, accomplish missions, find keys… all of this is needed to discover new areas or unlock shortcuts to make their travel easier.

Besides, Kepler has abilities which make easier the exploration of these new zones, like hispropelling backpack, which will let him to jump between planets or even from his ship to a planet!

In each sector they will be able to collect trash in order to earn money, wipe out who stands on their way and travel to different worlds, discovering the dense jungles of the Z’mba System or the mysterious and noisy factories full of jellies.

During the adventure, Kepler and Xana will need to deal with different challenges to progress in their endeavor. They will test their abilities trying to complete puzzle-oriented missions, fighting against angry crowds of enemies, or just avoiding the dangers that will stalk them. 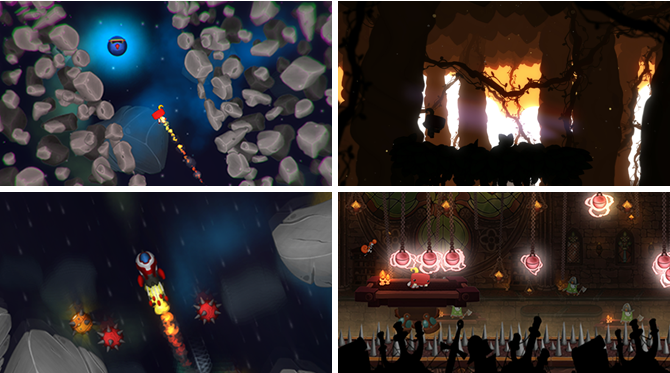 A specific type of stage has a slightly different approach depending on whether it’s a space stage or a 2D platform stage. A running space stage could consist of avoiding all the obstacles in the way and reaching a certain point in a maximum time, and a running 2D platforming stage could consist of using the stage (walls, hooks, etc.) to avoid a chasing danger, like a rising incandescent liquid metal which is gobbling down the stage, or a huge monster that is… yes, destroying the stage too.

We have launched it so that you will be able to check it and get a firsthand experience of one of the most important parts of the game: the 2D Platform stages. In this tech-demo you will be able to play a section of a platform stage which, despite of not being part of the final version of the game, it combines a bunch of different mechanics that you will find in the final product. 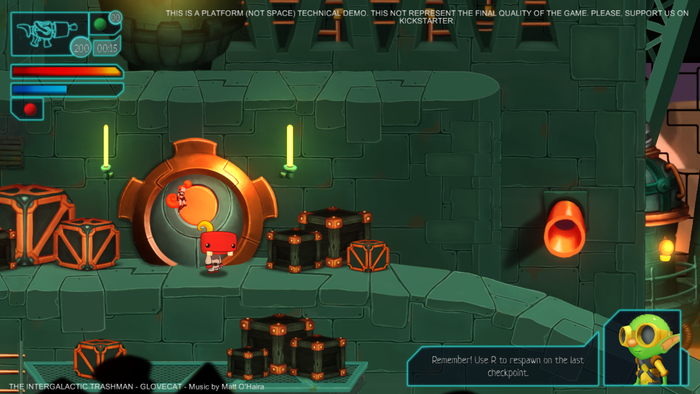 We hope you enjoy it!

We’ve just launched our Kickstarter campaign so check it out and also take a look on the new trailer.

New stuff, new improvements and an exclusive cutscene from our upcoming trailer. Also, we've a poll for you.

We've made lots of improvements and new stuff since the last time. Take a look! :D

We've spent the last months improving the space, and adding a lot of cool things to the platforms :)

The characters and the graphics is simply adorable! Tracking!

By the way, that "decoy" looks quite similar to the one used in MDK.

I love the characters and animations! Definitely tracking this one!