The Adventures of Box Guy

The Adventures of Box Guy is a 2D platformer in which players assume the role of Box Guy, everyone's favourite cube-based protagonist.

The game will be user-centric; shipping with a level editor from day one, players can create and share their own custom levels. The game will be playable on a range of platforms, including Windows, Mac, iOS and Android, and as if those platforms alone weren't enough, the multiplayer modes are totally cross-platform. Need to convince your PC-owning friend that you can walljump your way through the campaign faster than them, even on your iPhone? You can do that.

Box Guy - Back to Basics

It's been a while, but I'm finally back to working on Box Guy, at least part-time.

For those of you who aren't familiar with the project, have an overview: The Adventures of Box Guy, if you hadn't guessed already, takes places in a world composed of cubes. I'm trying to see just how much can be achieved in a game with literally no art whatsoever. Box Guy can run, jump and bounce off walls in order to get to his goal.

So, to the new editor, BoxEd v0.1. Much like the previous releases, it uses an XML format to describe your custom saved levels. However, at present, I'm only using a webplayer to test the game, meaning you cannot load or save custom content; however, I've included a sample level that can be loaded via the File menu for testing. Here's what the editor looks like whilst totally empty: 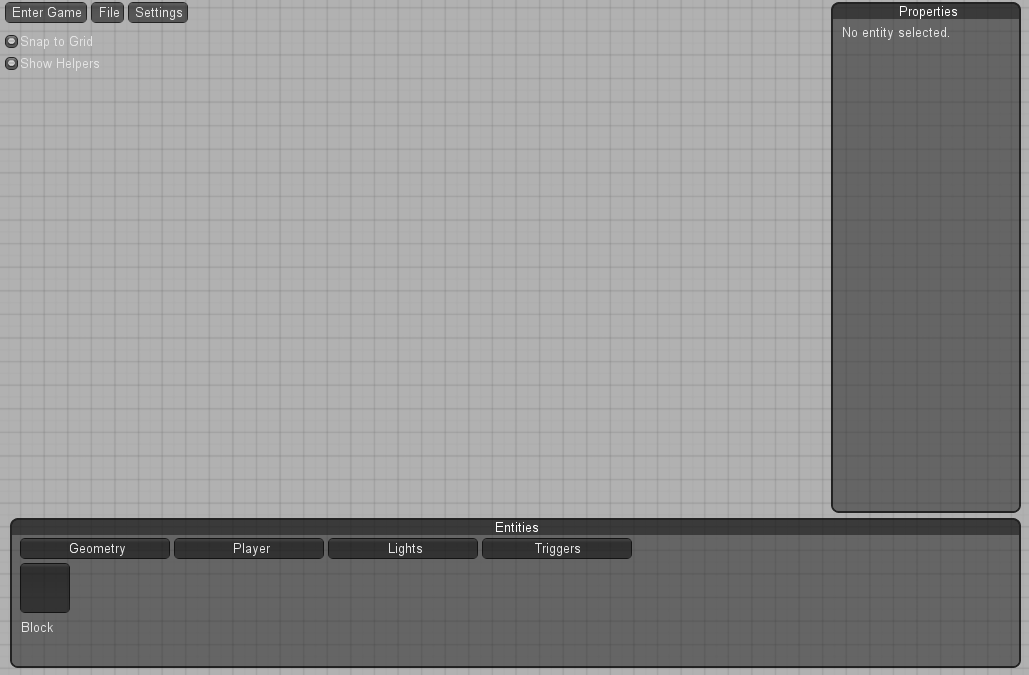 At this stage, you can either drag new objects into the scene from the entity bar, or load a level from the File menu in the top left. Let's take a look at the File manager... 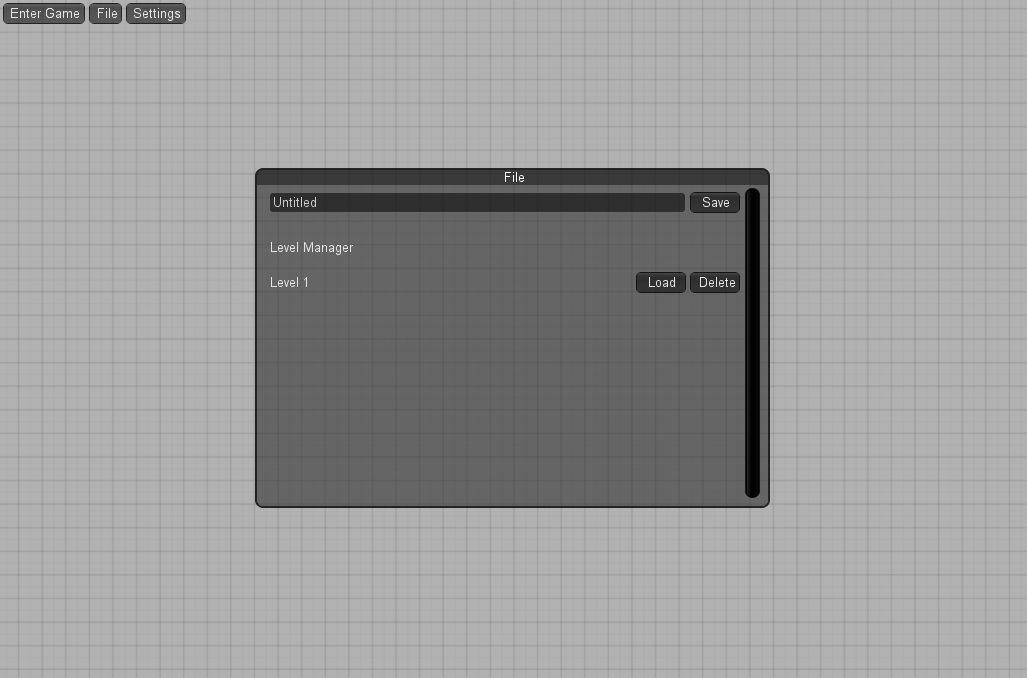 Here, I've already got a file in my levels folder. Now let's see what happens when this level is loaded: 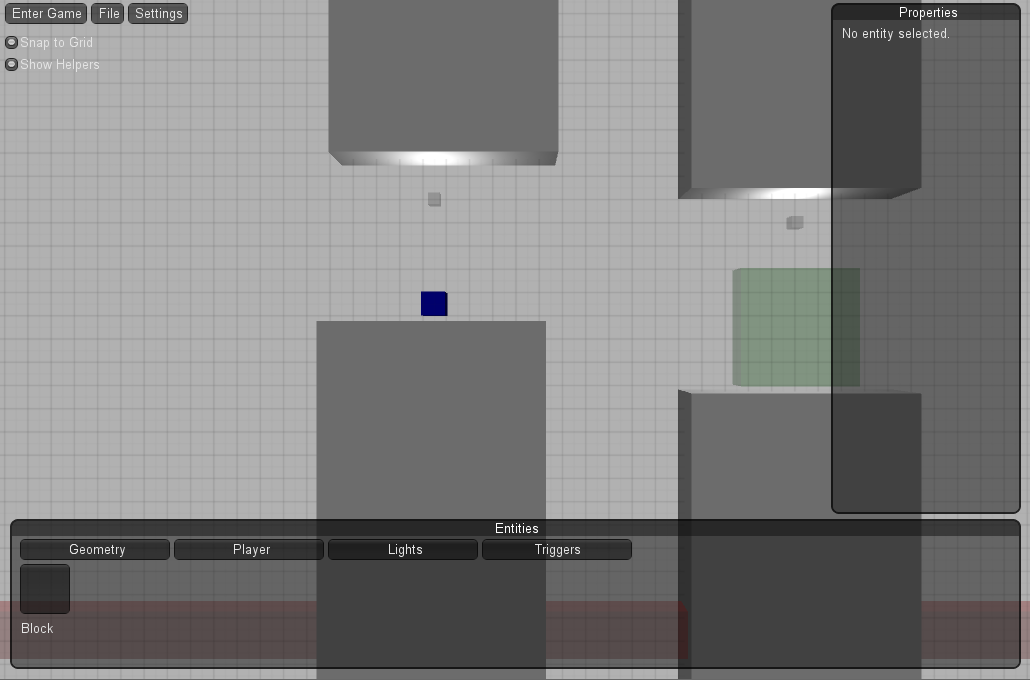 Woah, there are... cubes! Let's go over these one at a time.

- Grey cubes are geometry. The player can run along these, bounce off them, whatever. They make up the physical structure of a level, and have editable size properties.

- The blue cube is the player spawn point. It defines where the player starts off when this level is played.

- The red cube is a kill trigger. When the player enters this, they will die and get sent back. Fortunately, however...

- The green cubes are checkpoints. If the player dies, they will be respawned at the last checkpoint they entered, or the spawnpoint if they've yet to enter one.

- The small grey cubes are point lights. They have radius and intensity properties that can be used to define how bright and how large the area of the light is. 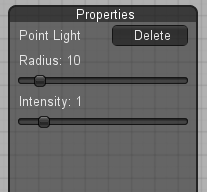 To place a new entity in the scene, simply left-click on the appropriate button from the entity bar and, keeping the mouse button pressed, drag the object to where you want it. Simple.

The last thing I should add is that the entire editor can be used even whilst testing the game itself. Need to change the height of a wall, add an extra checkpoint, or just make your latest trap even more evil? You can do that without exiting game mode.

I could carry on describing these features for quite some time, but I think it'd be more fun to just let you test the editor! A web-based demo is available; please note that this requires the Unity webplayer to be installed. The game itself is currently less than 500kb so it should load quickly even on less able connections.

If you have any feedback, just leave a comment below, send me a message on Twitter, or leave a message on Ink Studios' Facebook page. We don't bite. Much.

"...so I programmed in the potential for friendship. Or extreme griefing."

Following the BoxEd announcement, you can now download a standalone build for both Mac OSX and Windows with full load/save functionality.

Because a game isn't enough, and creativity is key!

Competition is healthy, or so we're told. Not wanting to be left out, there are some new features in the latest build...

The Mac OSX version of the latest standalone game build, including the new BoxEd level editor!

The Windows version of the latest standalone game build, including the new BoxEd level editor!

I wish :) This is all done in Unity Free (though I did grab the mobile offer that was on the other day).

Box Guy isn't my favorite protagonist per se, it's a tie with Cube Man, and Rectangular Prism Person

edit- i forgot the Rhombus Ranger

Rhombus Ranger is only available when you preorder via Game, and Cube Man is day-one DLC.

Rectangular Prism Person got cut by the publisher for marketing reasons.

This looks so damn good but no video?!:(

Maybe you check my project aswell..

I like to think that a playable build is infinitely cooler than a video (and more accessible too, at only 2.5MB!)

did you use just unity or modeling programs as well?
I mean the levels/platforms and such (except the character ofcourse)

It's all setup within Unity with non-uniformly scaled cubes and lights, no external programs have been used for the levels :)

Indie
Tags
Embed Buttons
Link to The Adventures of Box Guy by selecting a button and using the embed code provided more...