The key feature of Terra Magna is cross-genre gameplay - it is RPG/strategy, where player is able to lead dwellers of Terra Magna in massive fights, filled with medieval weapon and magic. The world of Terra Magna will be divided into many factions, which will interact with each other in politics as well as on the battlefield. Right now we've took our place in fight between Goblin Union of Haalt, dwelers of The Goblin Forests, and The Yellow Empire, powerful human invaders.

Also battle system is considered to be quite complex and realistic. To improve realism most of skills are capped for classes-archetypes and depends on the size of creatures.

Another key feature is weapon types and magic schools, which are considering as unique ways to harm opponents, each with its own advantages and disadvantages. Magic is planned to be divided into 5 circles by power and 3 levels in addition. Adepts, masters and great masters will have unique spells of each circle, and that's planned to include at least 15 levels in each magic school plus unique Archmages' ones.

Right now it's Alpha version of the project, and is currently in active (but quite lazy) development, which was started in April 2018.

- Very complex, but logical battle system, including different bonuses and penalties, getting through course of fight or positioning (read description of characteristics in [C]haracter menu)

- Training of skills with their using

- Every magic school is strong with their effects - Fire magic burns everyone in spell area, Air allows damage control, throws opponents and lowers their offense

- one-handed and two-handed melee weapon - scaled bonuses for two-handed, but no shield

- 4 types of shields (bucklers, round shields, kite shields and pavises)

- 8 types of stable parties (capitals, its districts, provincial cities, villages, castles, wizard towers, free cities and bandit camps) Currently its available to interact with 7 of them on the global map, and go to the tactic map of 3 of these settlements.

- Hour-based and locality-based spawn on the global map

- Hiring system (party consists of named officers as well as squads of soldiers, there is a limitation of hiring per day in one locality)

- Buying and selling equipment in shops

- Banditism (doing evil things like robbery, marauding and aggression can turn the player into bandit or even outsider, if there are any witnesses)

- Sound system on the tactic map 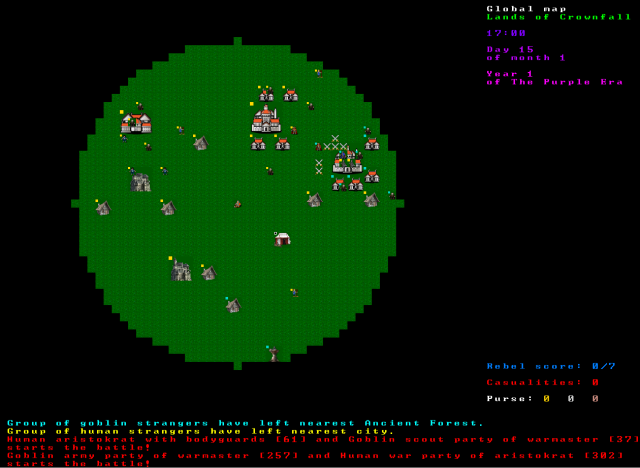 This demigod, i guess, can lucky annihilate entire patrol squad (look at his endurance above log) 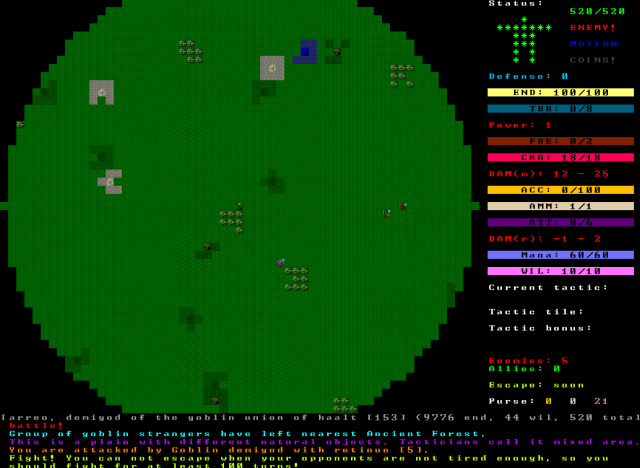 Very epic fight between human war party of aristokrat and goblin war party, commanded by the goblin king. There are about 400 creatures by each side, but now in the FOV we can see about 100 at all. 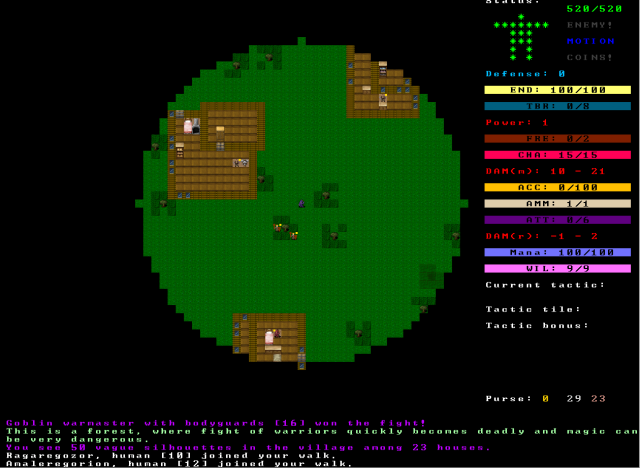 Village. So peaceful place. And it can be the paradise for robbers. 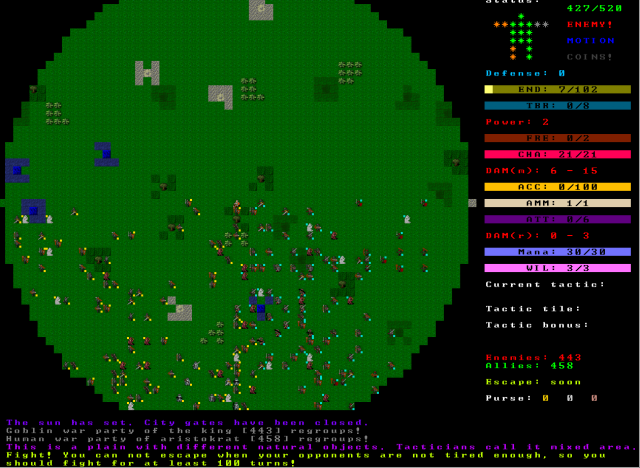 Save with Shift+ESC. Advanced keys in the .pdf file inside.

Second alpha release. Summarized change are in the pinned article.