Temple of Ra: Journey to the Underworld

Ptolemaios II was a greedy and cruel pharaoh who exploited his people and was a warmonger who always found himself leading skirmishes against the Roman Empire.

However, many of the officials under him despised the way he ruled Egypt. Conspiring an assassination, they sabotaged one of the battles against the Roman forces as they got Ptolemaios II killed in battle brutally.

Given a hasty funeral session as a new pharaoh came into power as ruler of Egypt, Ptolemaios II soon found himself in the middle of the mortal realm and the afterlife; Duat. Osiris, the God of the Afterlife has placed Ptoelmaios II into a test he has devised.

A series of dungeons Osiris has created that existed between the realm of the living and the dead served as the test, as Ptolemaios II has to prove himself worthy of transcendence through a series of rituals present in the dungeons for judgement.

At the same time, Apep, the vile evil known to all as the Enemy of Ra came to know of the dungeons Osiris has created for the now deceased pharaoh. With his influence, he has turned the dungeons into a dangerous twisted labyrinth. Obstacles that seek to torment Ptolemaios II and to spread his evil influence.

With Osiris now sealed from direct contact of the dungeons, Apep is one step closer to warping the entire realm into his twisted visions. All is not lost, as Osiris granted Ptolemaios II with powers in the form of artefacts in order to reclaim the dungeons from Apep and to prove himself worthy of moving on.

Progress has still been pretty slow, but here's an update on one of the major recent additions to the game! 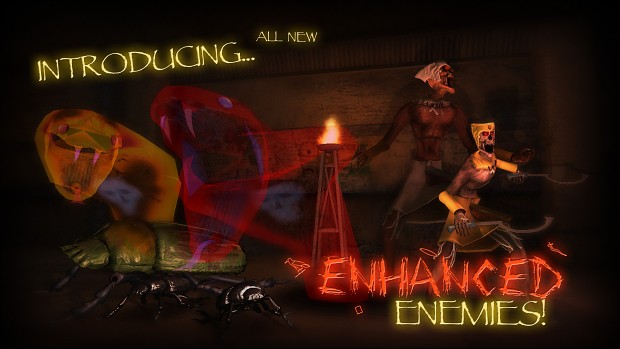 These special foes are bigger, badder, and have some differing abilities from their normal counterparts! 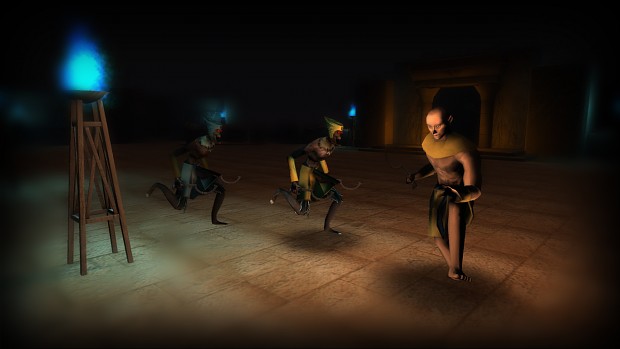 While exploring the depths of the Duat, you might sometimes encounter these special enemy variations. Most easily identified by their different colour scheme, they can potentially turn an advantageous situation into a threatening one. Not only are they stronger with more health or damage, but they have their own unique abilities as well! 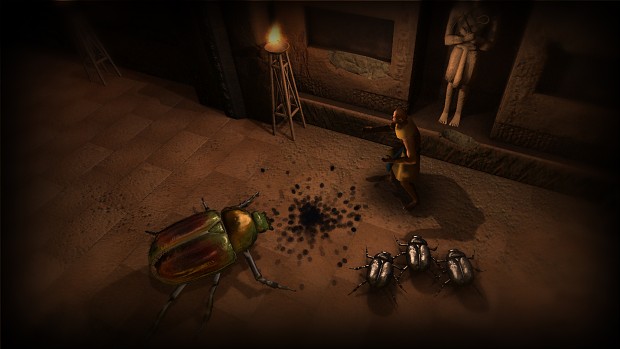 These deadly giant insects are not just a lot larger and tougher to kill, but they have the innate ability to summon swarms of smaller flesh eating beetles that chase the player. Though it may look beautiful, and peaceful at times, It protects its smaller counterparts when attacked, and can be even more deadly when it is supported by a swarm of normal Scarab enemies. However, due to its immense weight, it moves very slowly. 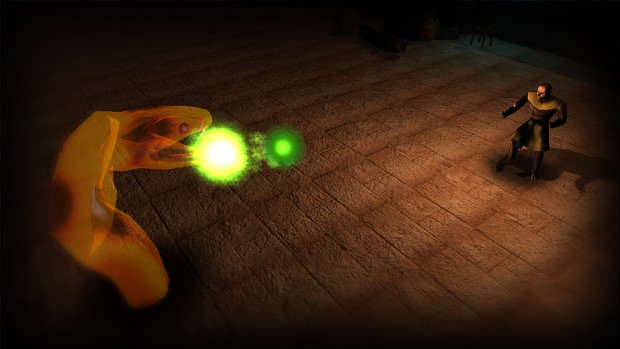 These larger spectral serpents are much bulkier and are equipped with a more potent venom sac, containing strong corrosive venom. Instead of spitting small projectiles of venom, this variation of spectral cobra spits large balls of acidic venom, which leave behind puddles of the corrosive spit. 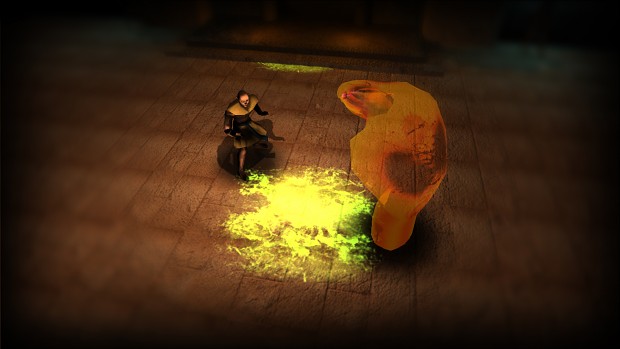 Staying within these puddles will whittle your health down bit by bit, so it would be wise to try avoiding them. However, this effect is only temporary, as the spit puddles will dry out eventually. 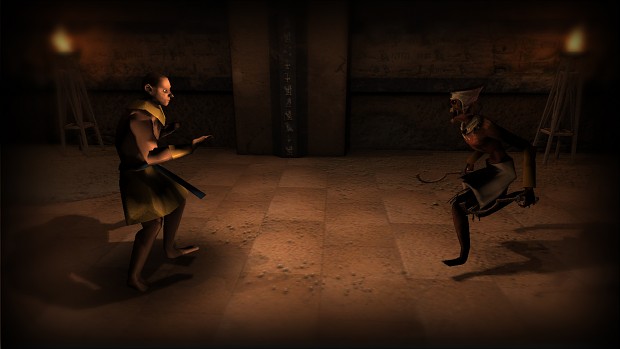 At first glance, these guys seem like the average mummy warriors of Apep that you see everywhere in the Duat. However, as the old saying goes, "Do not judge a book by its cover". Once weakened enough, these enhanced mummies will transform into a mightier and larger version of itself. 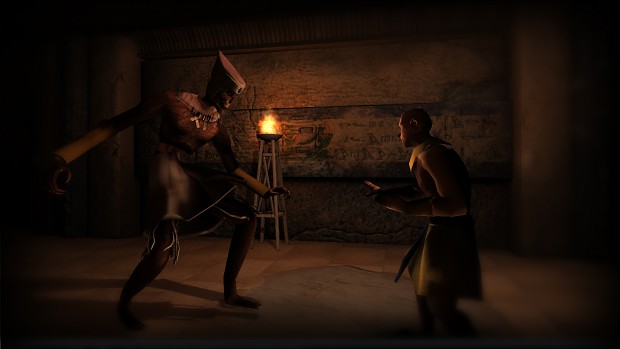 These larger forms boast extra health, and can knock you backwards with a swift arm swing. Although it is a lot slower being unable to run, it can summon blasts of fire from the ground, where the player stands. Prepare to run if the floor beneath your feet starts to glow! 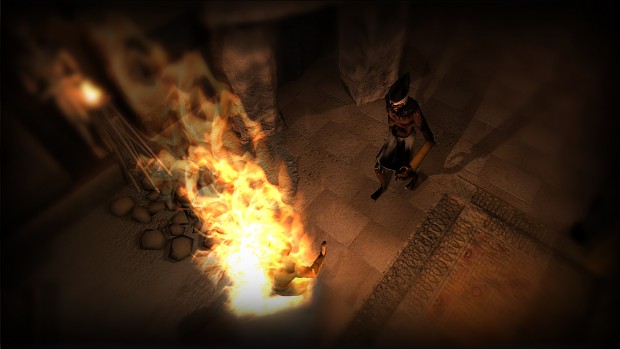 With these enhanced enemies roaming about the Duat, will you be able to reach ascension?

Until next time!
Ean (The Rare Aquatic Pyro)

It's been a while.. Development has been slow for quite a while, but we are still making progress. Enjoy these new screenshots of the game environments...

Keep in touch with us!

Temple of Ra: Journey to the Underworld - Demo 1

An early game demo for Temple of Ra: Journey to the Underworld, showing some of the game's basic features. Play through the first level in this demo...

I just played Temple of Ra, and I was wondering if you're still working on it and plan to release it some day? I really enjoyed it!

Obviously the demo is just that, a demo. Considering that, I thought it was very good. The only real issue I had was with the bugs. If they were to the left or right, I had to shoot above them to hit them. Other than that, I didn't find any real issues. I think the models were great, and the animations as well!

I really hope you plan to continue work on this. I only ask because this game page hasn't been updated in some time.

Anyway, I made a video (actually two) of the game, so if you'd like to see it here's the link!

Hey there, glad to see you enjoy the game! First and foremost, apologies for the really late reply!

To answer your question, yes, the game is still being developed, but development has been slow, due to our team's members, myself included having to do National Service for 2 years. Such is necessary for us guys to do here in Singapore. Most of us have just recently completed our NS, so we'll be continuing with development soon!

Really appreciate the videos too! Also rest assured, the bugs with aiming at bugs (heh), have been fixed in our later builds. We'll be releasing an updated version of the demo soon! :D

hi, i see you guys are not using any official games from the market as foundation, you use unity, therefore it is not a mod, it is indie game perhaps?? so why your page not in "green" if you don't mind me asking??

and may i ask how unity is working for you, is it a friendly development kit?? what sort of prior knowledge do i need to get start with it??

and bless you to finish the game one day, it would attract a lot of ancient Egyptian geeks like myself, i really love the topic of ancient Egyptian, my first game i bought as a kid was called Mummy, the tomb of Pharaoh!! and this game also reminded me of a 2.5D game call the powerslave too!!

Hello,
Glad you find the game interesting so far! :D
As for the site theme on the game's page, is it using the red modDB theme instead of the green indieDB theme? I'm not sure why it's like that for you, because Temple of Ra isn't set up as a mod, and it shows the green theme for me on various browsers on my computer and phone, regardless whether I am logged in or not. It might be an issue on your end or the site.

About Unity, it IS a very good tool for aspiring game developers. It is very easy to learn for beginners too, coding is done using Java or C# scripts. You don't need to focus on one programming language too and you can use both. On the art side, it's quite easy to import art assets into Unity. It accepts most 3D file formats including .fbx and .obj and also scene files for 3D programs such as blender .blend files and maya .ma and .mb. Basically you just need to know some basics for scripting/programming and some for 2d or 3d art to produce a simple game.

It also has an asset store where you could get some art assets or scripts to use in a game. With these, the only things you would need is basic programming and a good game concept. That's pretty much the bare minimum you'd need.

In addition, the community is very friendly and helpful. There is an abundance of help available from the community as well as the official documentation. I you're trying to do something for your game but you are stuck, there's the chance someone else has tried before, so a solution could just be a google search away.

Anyway, the best way would be to experience it yourself! You can try following basic tutorials such as the Worminator tutorial by the Tornado Twins on YouTube, which was what I checked out when I first started using Unity.

Twitter
Tags
Embed Buttons
Link to Temple of Ra: Journey to the Underworld by selecting a button and using the embed code provided more...

Ankh 3: Battle of the Gods Adventure