Experience brutal battles on a massive scale! Wage war by creating enormous customizable armies and experimental war machines that can change the balance of power at any given moment. Take the role of one of the three enigmatic commanders, each representing a unique faction with a rich story that brings a new level of emotional connection to the RTS genre, or fight the battle online. Where do your loyalties lie?

Creating a *.sc2 mod package for use with the compelx SC2 Mod Manager

Posted by compelx on Oct 15th, 2015 - Intermediate Starting a mod

What is a Mod Package?

An *.sc2 mod package is just a .zip file with its extension renamed. It can opened or extracted with 7-Zip or any other commonly used archiving/compression tool. For the rest of this tutorial it will simply be referred to as a "Mod Package".

At a minimum, a mod package contains 3 items:

If the author so chooses, they can also include HTML or RTF mod documentation. While this is not required it is recommended that the author include something, if nothing more than a changelog.

Instead of creating mod packages by hand, a GUI tool has been created to make this process simple.

This tool facilitates the creation of mod packages by providing a simple to use interface. An example of the current interface is below. 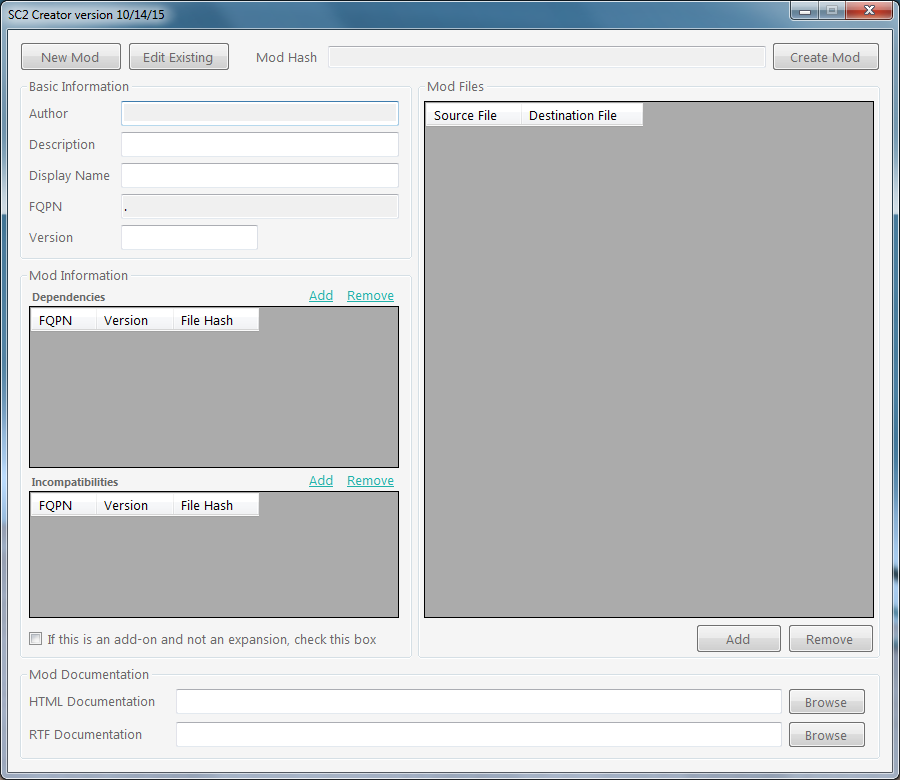 The majority of the interface is rather self-explanatory but there are some things to take note of:

Use these instructions depending on the type of mod you are creating. If you are wanting to know about how mods are installed in Mod Manager and how installation conflicts are handled, see the SC2 Mod Manager article which explains this in further detail.

A stand-alone new mod (with no known dependencies or incompatibilities)

A newer version of an existing mod

Leave dependencies and incompatibilities blank and do not check the add-on checkbox. No other action should be required on your part because when the user goes to install the newer version Mod Manager will ask the user to uninstall the old version first

An expansion mod is any substantial mod that requires another mod to function. Add a dependency for each mod required to be installed in Mod Manager. Leave incompatibilities blank and do not check the add-on checkbox

Add-ons are mods that are either very tiny or are not designed to be used with expansion mods. Leave dependencies and incompatibilities blank. Check the add-on checkbox and provide it the mod package it is an add-on for