Super Pokemon Eevee Edition is a Pokemon game with a difference. It's a throwback to the second generation, featuring graphics from G/S/C, battle system from Final Fantasy and a story involving godlike entities, called hypervisors. It takes the Pokemon formula and mixes it with elements of a traditional RPG.

Gold, a rookie Pokemon trainer, is tasked to kill the hypervisors and stop the apocalypse. Helping him is his starter Pokemon, a special Eevee which has the uncanny ability to switch between evolutions at will.

Gold's with his Super Eevee set out across the region to beat the gym leaders, but things get complicated when he meets M, an entity who reveals the true nature of his world.
Six god-like entities, called hypervisors, which M is one of, control the world. The hypervisors have initiated a plan to reboot the game into the third generation. A generation with better graphics, expanded features and brand new Pokemon.
But it would come at a great cost....

The third generation brings with it, a new data structure, meaning the current generation would be incompatible. A total reboot would be required. Destroying the second generation to replace it with the third. This would mean the death of countless humans and Pokemon.

Now Gold must go on an epic quest to kill the five hypervisors, a quest to stop the coming of the third generation, a quest... to save the world.

This is his story.

I've been playing a lot of Bloodborne, and what's really stood out to me, is the great way it does shortcuts. So I've added strength boulders for SPEE, but with changed functionality. Throughout the world of SPEE, you'll now see boulders sticking on ledges. You can push these boulders from the top to open up a permanent path. 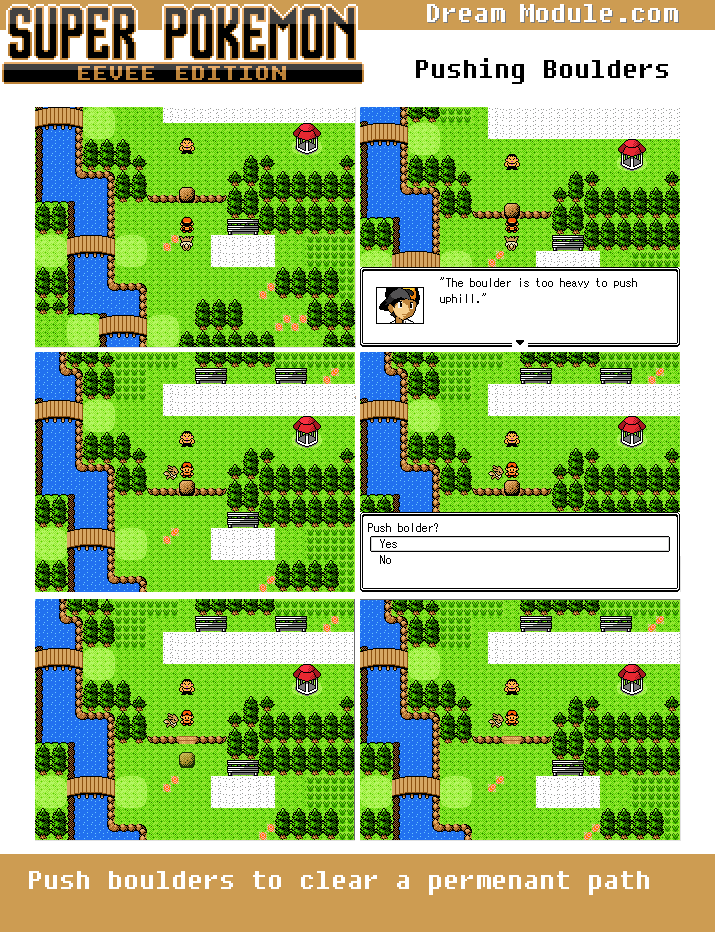 Here is another new area you visit in 0.75; West Beach. (name pending) This new map is a unique beach-like terrain, on the west side of Ignis Island...

A progress update regarding the next release; 0.75 and a new map!

Beta 0.74 over 5 chapters of content to get through, contains over 35 Pokemon to catch, six forms of Eevee to obtain, five gyms to conquer, two Hypervisors...

Beta 0.73 Over five hours of content to get through, contains over 30 Pokemon to catch, six forms of Eevee to obtain, four gyms to conquer, two Hypervisors...

Wow... Just got my first Pokemon and already hooked... Everything from real time battles to the lovable Eevee that follows you everywhere. You know what? A feature sort of like Pokemon Refresh where you can play and feed or abuse your Pokemon would be nice, too!

Where did you get the graphical assets for this game, like the tileset?

When will the next update come out? I'm psyched for the 8.0 update! Right now, in the game, I defeated the third hypervisor, and his son went with Zero after I killed him, telling me that "I'm going to be very sorry." Then it teleported me to the entrance and there was a guard and every time I talk to him, he says "New Update coming soon." Now I'm just wandering around, battling other Pokemon. I have finished all the Side Quests. So yeah, I'm basically waiting for the next update.

Will this game every be able to be played on MacBooks? Just a question because I would like to also be able to enjoy it when I get time on my computer.

Will Sylveon and Glaceon be added in a later time with an update or not? Just asking because I have all 7 unlocked and want the other two to finish my team.