My challenge with Stingray is to bridge the gap between hard-core flight simulators and fun, action type game play. The one precludes the other, partly because of the complicated systems and control interfaces, but mostly because of the time investment required to overcome that complication.

Thus the flight model in Stingray is forgiving, and yet very flexible. Similarly, the flight systems is functional, but not complicated, and the controls are such that the player does not need to move across the keyboard.

My vision with Stingray was to being the old-school top-down or isometric shoot-em'up and dodge-em'up game play into a 3D world, complete with a tiled environment. Having a 3D perspective view brought along it's own challenges, since the viewpoint is restricted, but threats are not. The solution is a combination of AI and other tweaks, and I hope to achieve that "Hectic!! But I can make it" feeling, or the "Get out of here!!" feeling.

Rogue Trooper is a game that's still on the top of my personal charts. It's a basic shooter. Fun, and stays fairly close to it's source material. And quite cheap on Steam now. Those are not the reasons I like it though.

I like it because of the set-pieces. This is the same reason a lot of people liked Spec Ops: The Line as well. The whole game is one long Michael Bay movie. Every level is Optimus-Prime vs Megatron, and this is what I think gives that overall feeling of excellent narrative. It's not really complicated or in-depth narrative at all when taken in isolation, but because of the environment, because of the level of involvement in the set-piece, it feels like it has massive narrative.

Rogue Trooper didn't have the tech to do this very well, but it is still there. Spec Ops though, that does it all. The vistas, the vertigo, the armoured enemy, the banter and the swearing. Well worth the popcorn. It's also worth noting that the Uncharted series is based on the same ideas, but I've never owned a play station so I don't have personal experience with it.

So what makes for a good set-piece? Well, I'm not an award winning director or anything, but the first thing I've identified is size. The bigger it is, the better. This is why in the first Far Cry, they plopped down an aircraft carrier instead of a simple abandoned airbase. The aircraft carrier is not just long and wide, but from a first-person perspective on the ground, it's also damn high. That's a set-piece right there.

The second thing I've identified is effects and animation. A dead area is dead. That's not a meme, it's a truth. If there's radars in the area, move them about. If there's a stack, make smoke come out of it. Old doors? Hinge them back and forth a bit. It's these little nuances that really makes it special. For an analogy: Look at the inside of the Pagani Zonda. They could have just gone and stuck some normal air-vents in that cabin, but they didn't. They made it look like steam-punk plumbing, chromed and polished.

So, since my submission to Indie Cade in May I've been working on the ten identified set pieces for Stingray. This isn't something I can post about easily though, since it would essentially be spoiler posts. But I wanted to share what's currently in the foundry. The process of constructing one of these set-pieces, the environment of one of these. 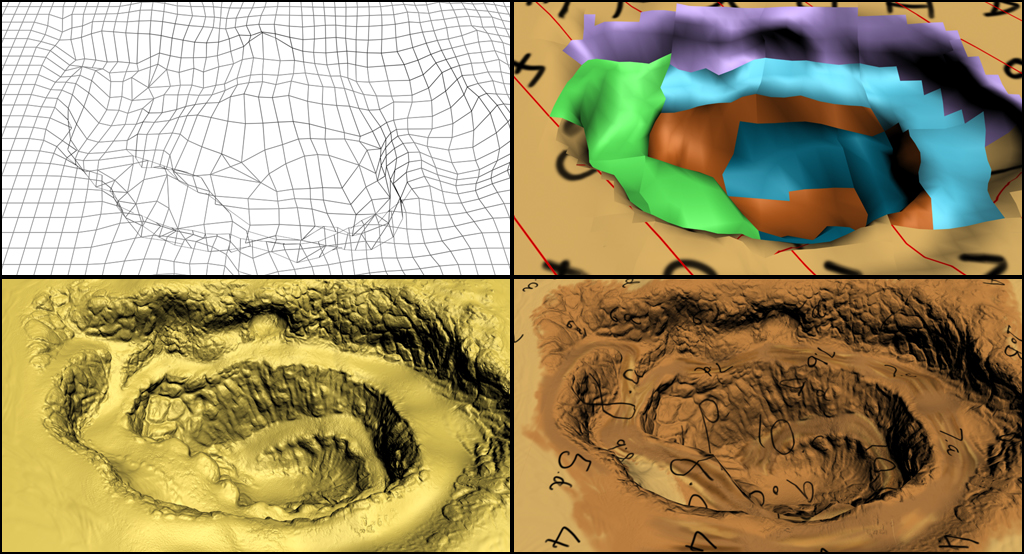 The first is the wireframe of the in-game model, and next to it is the same model as a solid, but coloured based on which bits are mapped together. Next is the sculpted seriously high-detail model of the same area (12 million faces). This is used to generate the normal maps, which when applied together with other (still WIP textures), forms the last image, which is again the low-poly game model as it would look in the game.

As I've said before, the most time in development is spent making content. And these sort of set-
pieces takes the longest of them all. The content itself, the maps, the models. But also the animations and effects, testing, the scale. Does the detail level sit on par with the rest of the game? What will be the memory requirements for this bit? There's a whole lot of planning that has to happen, but the pay-off is worth it though. If I pull this off, it would hopefully transform Stingray from a simple game to an epic spectacle with pantomime and theatre. Something memorable. Something that, hopefully, you will like and talk about.

I've been busy for a while working through concepts and area designs for the main set pieces of Stingray's engagement, aka boss fights. It's slow progress...

I concluded my IndieCade 2012 submission over the weekend.

Haha Busted! Hello from south Africa! I used to be on SAgamedev before it got nuked by some emo dude.

Thanks man! Check out makegamessa.com, which is the new community site.