Steam Marines is a Squad-Based Tactical Roguelike being developed by Worthless Bums. It is currently for sale on the Humble Widget and Desura and features:
- 2D retro-styled art and turn based action.
- Procedurally Generated Levels.
- A squad of combatants fighting for their lives in monster filled levels.
- Use your squad to cover defensive positions or funnel enemies into chokepoints to blow them up.

Steampunk spaceship under attack by aliens, you say? The aim of the game is to progress through the various decks of your besieged steampunk spaceship in order to repel the alien invaders and get out of dodge. It features permadeath and will have a recruitment system. Build your squad members into deadly, long-range marksmen, or up-close-and-personal death machines. But no one is invincible, and if someone dies you'll have to replace him/her with a raw recruit. If the entire squad dies it's game over.

The game is also listed on Steam Greenlight! Please go and vote/favorite it if you enjoy the alpha!

Steam Marines v0.8.6a is here with the Gunship boss, moddable files, and more!

The big stuff this build includes the data.mod and dialogue.mod files that exposes a lot of in-game data to be modded. Game too hard? Make it easier - your way. Too easy? Be masochistic like me and make enemies far more punishing, or marines far weaker.

The Armory Deck gets a boss - and he's an asshole. Marines beware! As with every other boss in the game, it does not have immunities or subvert your hard earned tactical knowledge. But it does have a trick or two up its sleeve. Learn fast or die fast.

One of the complaints I get is that some people find it hard to pick out units - readability can be an issue with such a sprite-filled screen. I endeavored to fix this with some tileset changes. My process: 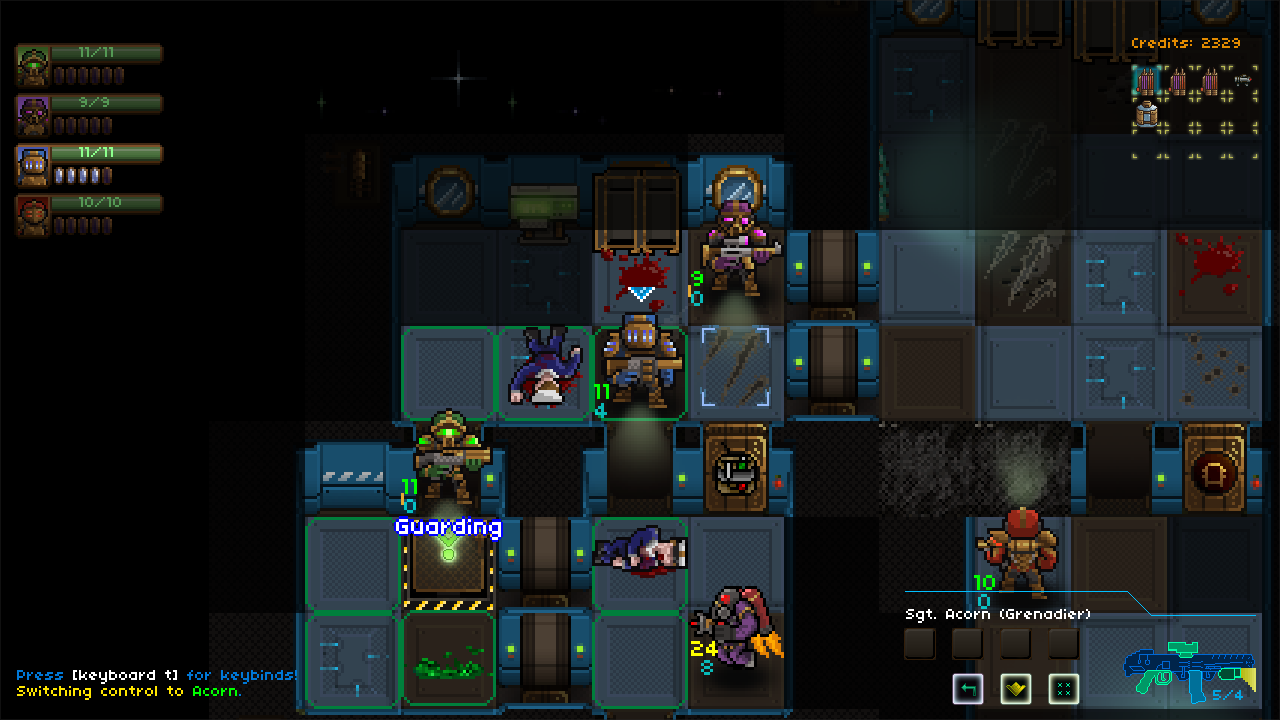 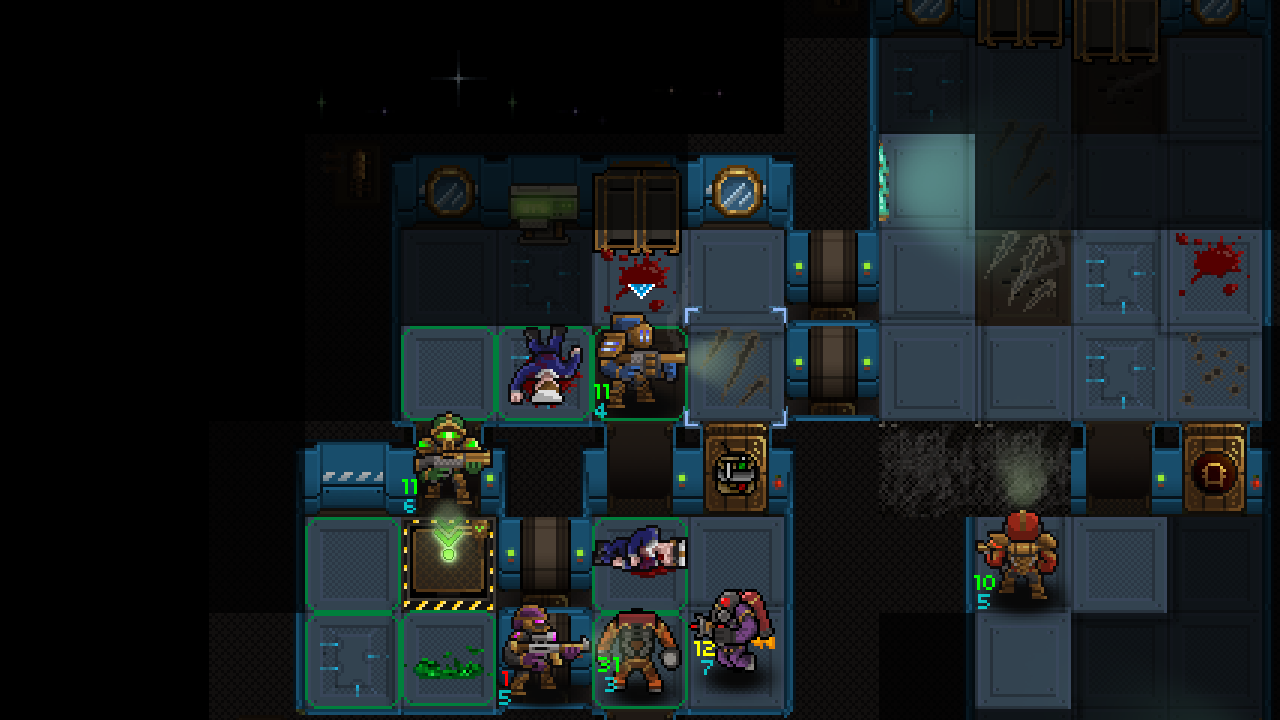 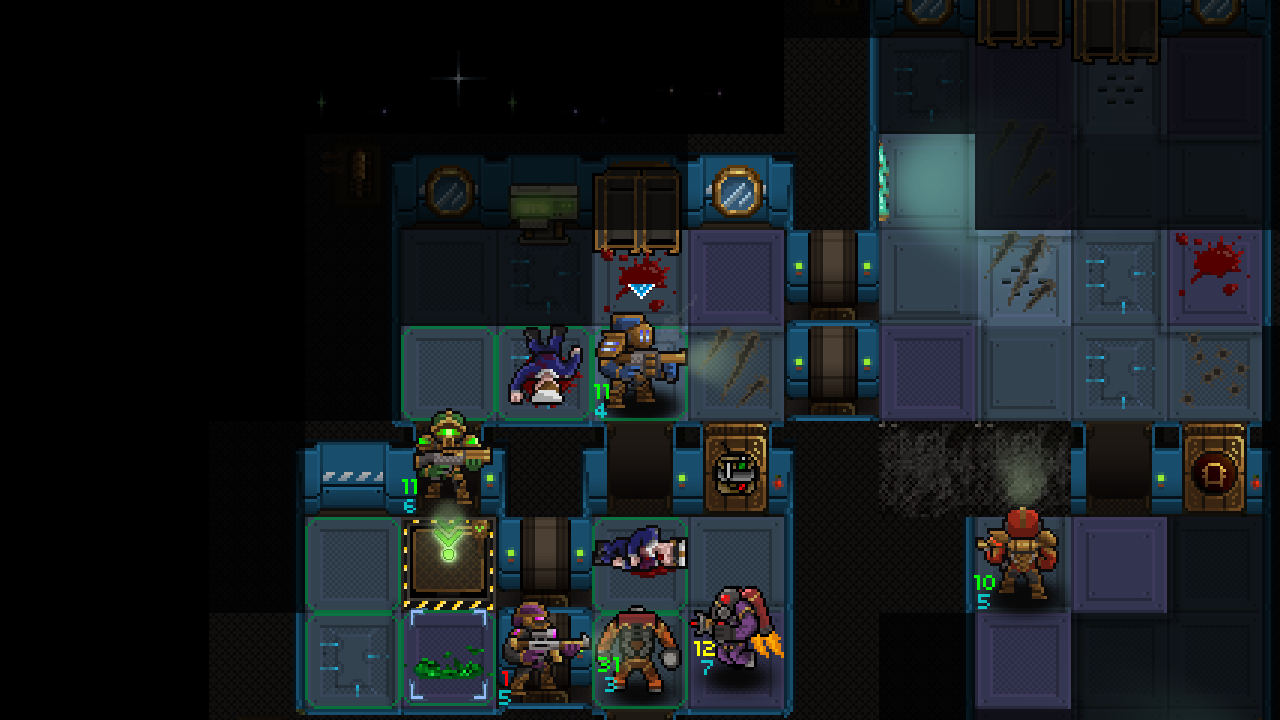 There was a lot of back and forth regarding hue, brightness/contrast, saturation, et cetera. But the gist is that a lighter background (floor tiles essentially) helps pick out units due to dark outlines. Bouncing AND contrast! 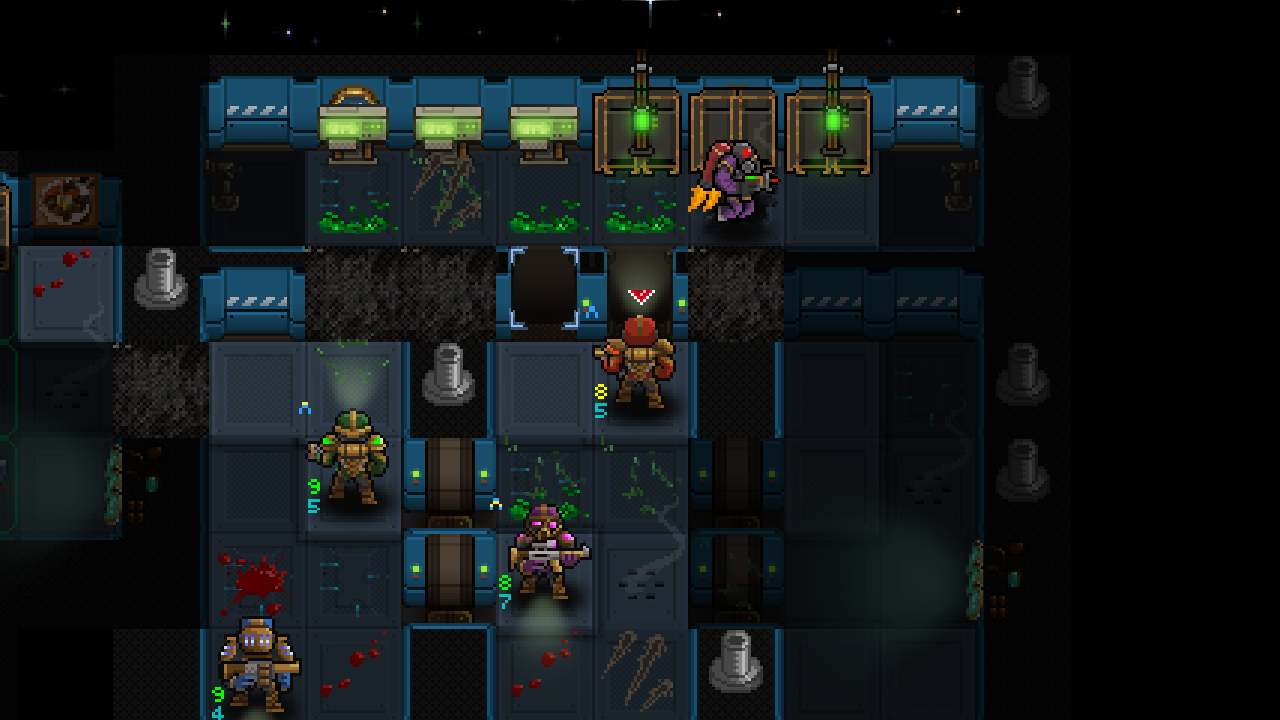 I added an opt-in feature that sends non-identifiable game play data to a server. This will help me better balance and design Steam Marines. It also has a very prototype-y online high score (disabled by default) - maybe an online leaderboard is in the cards? We'll see! 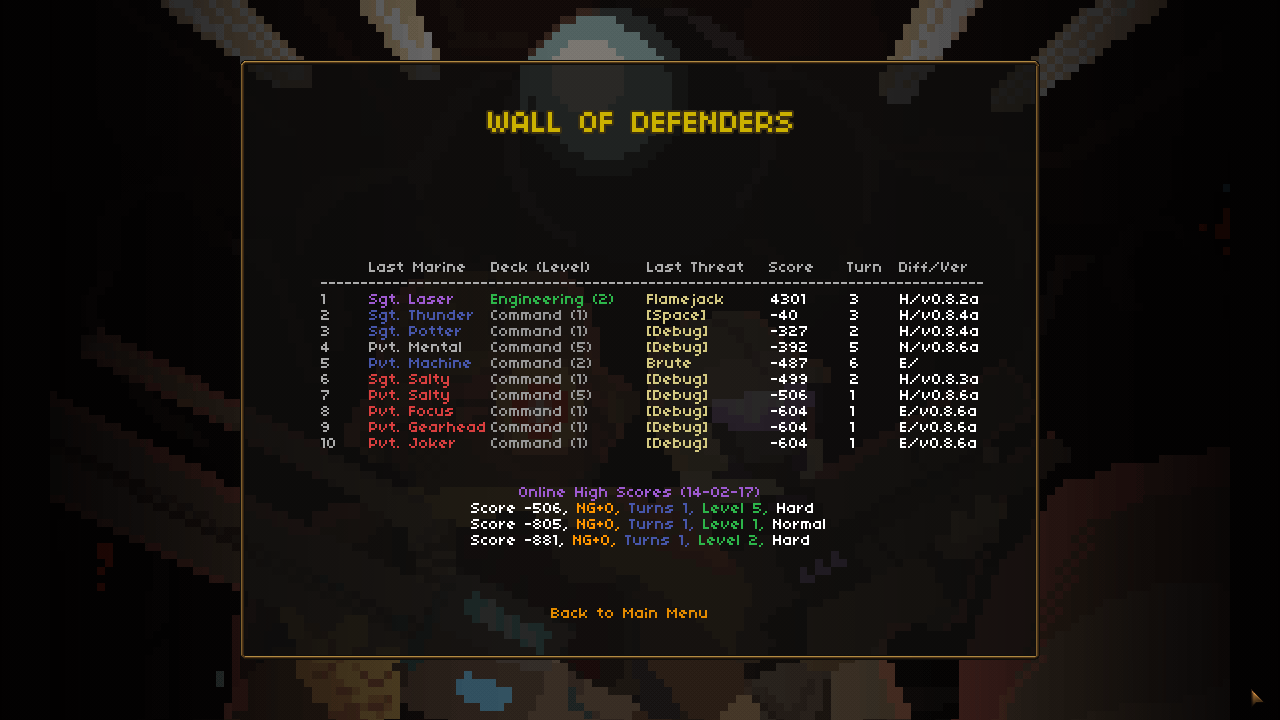 Thanks for reading, and happy robot hunting!
Mister Bums

Steam Marines v0.8.3a is here with a tutorial, unit tooltips, and more!

Steam Marines v0.8.3a is here with a tutorial, unit tooltips, and more! Also getting ready for Steam launch!

Steam Marines has been Greenlit!

Steam Marines has been Greenlit on Steam. New build forthcoming and everyone who bought Steam Marines will receive a Steam key.

This is the alpha build of Steam Marines v0.8.0a for Mac OS X.

This is the alpha build of Steam Marines v0.8.0a for Windows.

This is the Steam Marines alpha build v0.7.9a for Mac OS X.

This is the Steam Marines alpha build v0.7.9a for Windows.

This is the alpha build of Steam Marines v0.7.8a for Mac OS X.

This is the alpha build of Steam Marines v0.7.8a for Windows.

i really like the game, i bought it and i really like it alot, but one problem, the game seems to be lagging really bad, its almost unplayable. ive tryed everything i can think of and i was hoping maybe you have a suggestion that could help me fix the problem. ive tryed changing my power options on my computer, all the way up to high performance, and it still has no effect. changing settings in game doesnt work either. please help.

Send me your console.log file (located in the Steam Marines directory) to yjseow@worthlessbums.com and I can take a closer look!

I bought the game yesterday and I haven't received the steam key yet.
I have sent an email hoping that Desura's team will fix this...

When you go to Indiedb.com and click on "Keys" next to Steam Marines there's nothing?

Buyer's remorse in one second upon learning that the current version is STILL STUCK at 8.2a after over a month. And this with a sale on the Desura landing page? Are you kidding me?!?!

You might as well just sell it on Steam and forget the other distro methods if this is how it's going to be with future updates. This happened with several games on Desura who are more Steam-friendly than anything and I'm getting tired of having my patches held hostage by politics. If I was a Steam user, I wouldn't be here purchasing through Desura. Why pamper them and make everyone else wait for months? Dredmor was infamous for update denial and now this looks like the same type of burnt offerings once again. This is unacceptable, sorry. I want a refund.

Update Crusade Progress: Message left on the Worthless Bums forums, two comments left here on Desura, an email fired off to Desura in the form of a complaint, and I also took the liberty of sending a personal email to the dev via blog address.

I'm not expecting miracles here, but when they are pitching an alpha game that has a timestamp of September 4, 2013 on the Desura servers...and then SHOWCASE the game on the landing page for a special sale like it's brand new, I seriously doubt the integrity of this place.

Hi, Shardz, thanks for taking the time to kick the bushes. I'm working on straightening this all out right now.

The MCF version is up to date, I was not aware there was an issue like this. Sorting it out now.