Sky Battles Deadly caves... Massive robotic beasts... Fire breathing dragons... Fly your plane and battle ruthless mechanical enemies in ten fantasy settings. Single player mode requires players to capture gems and destroy targets before advancing. Multiplayer has you battle against enemy opponents online. Choose a world in the lobby and show everyone who's boss. Air combat with emphasis on strategy and skill. Do you prefer to silence your enemies with stealth or do you prefer laying air mines? Find out in this 3D air combat shooter. This game is coming to PC, Mac and mobile and is in a playable state. Follow the thread for upcoming links to playable builds and launch date. By indie game developer, Peter Lacalamita. Features: Single Player and Multiplayer mode. Fantastic dynamic environments. Multiple upgradable weapons like missiles, air mines and cloaking. Built using Unity3D

Peter Lacalamita is proud to announce his indie air combat game Sky Battles has launched on Steam, the venerable online store for PC games. Sky Battles is independently made by artist, animator and game developer, Peter Lacalamita over the course of approximately two and a half years. The game had a successful Steam Greenlight campaign, a prerequisite for approval on the Steam platform. 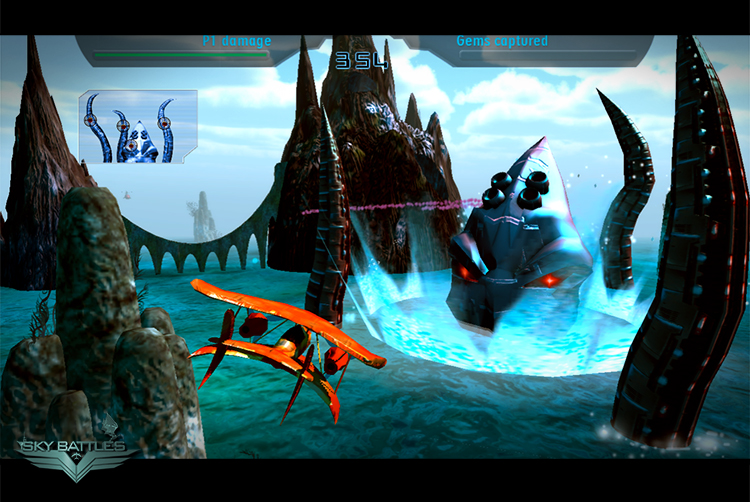 Sky Battles features bi-planes and giant titan bosses like krakens, sea monsters and fire breathing dragons to name a few. It also includes a multiplayer mode allowing players to engage in online dogfights. Steam achievements and leader boards have been implemented to complement the gaming experience.

Check out the game on STEAM: Store.steampowered.com

Survive a cave and defeat a cyclops boss in a new demo update here on IndieDB. This update also supports PS4/Xbox360 and Logitech controllers for the...

I looked over at my monitor and I saw a new e-mail. I've done this many a time. But this was different because the subject said "Congratulations, Sky...

Toronto, Canada - Game developer and artist, Peter Lacalamita is pleased to announce his air combat game Sky Battles, has been greenlit for the Steam...

Sky Battles has been greenlit on Steam!
Steamcommunity.com

Nice. There isn't a radar to show the ennemies ?

There is an enemy ahead warning indicator that is displayed when enemies are relatively ahead of your plane. The maps aren't too big so that duels are frequent. Keep watching. There could be a fire breathing dragon in the next update!

Ok, thanks for the answer.