The old man got up in the morning. He left his house and walked toward the center of the village. While walking slowly, he started to notice the uneasiness of the locals. When approaching a group of people, a friend recognizes him and tells him what happened. The "black light" fall in the southern mountains, the trees began to die, the animals fled and strange voices were brought by the winds. The old man, now exalted, ran to the temple, took a few scrolls and headed to the mountains ... What is this? A baby? ... That symbol? ... The child has come, his father is looking forward, the battle began?

(Excuse my English is not so good)

In the first post I will talk about the general idea of the game, the progress to date and the things I plan to do in the coming weeks.Currently the project is in a stage where I'm developing the various basic mechanics of the game. The game has a basic movement system with the ability to jump (but with some bugs). Has a spell casting system with customized cooldown time for every attack (in the next few days the plan is to add mana costs for spells). Also the game has several NPC that will help you during the course of history and there are many more in development.

As for the ambience of the levels, I have the collaboration of Nano (Ivan Molina) which is doing a wonderful job in the backgrounds of different levels.

Background image of the second scene (in progress): 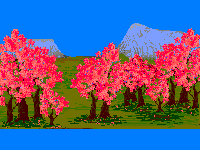 awesome game dudes! I am waiting this game every mornings!!! !