Special Containment Procedures: In a box in my office.

Description: It's a rock that makes you procrastinate.

Addendum: Probably memetic or something.

If you downloaded v1.01 or v1.0 (120 people did, which was completely unexpected)you might have noticed that the game lacked some pretty simple features, like a menu, v1.02 fixes that.

Now it's more of a game, and not just a level.

But anyway, starting with the bugfixes:

•I removed the scripted crashes, because that seemed to confuse the hell out of everyone.
•I accidentally left some UT3-specific stuff inside the game, which now is all removed.
•Blocked some aereas of the map, which I accidentally left unblocked in the previous version.

I also changed some stuff near the end-game, but I prefer to not spoil those here. :)

Below you can see a image of the simple menu I made for this version (click to enlarge): 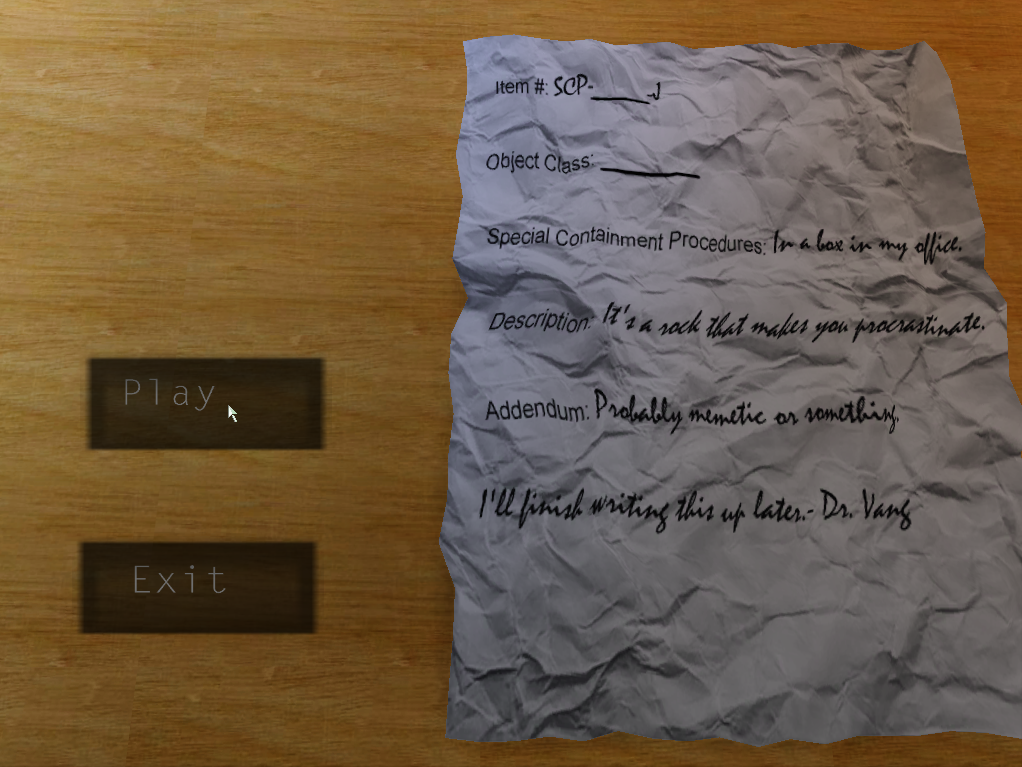 Now that I fixed this more basic stuff I can focus on polishing those year-old models and adding some other things. :D

I hope you like these and 'till next time.

Now with a proper menu and quite a few less bugs. For a full changelog, see the post in news section.

This game looks promising (I can't believe that you can make a game with this SCP), but I have not a clue on how to open the door/use keys. I have the first and the second, but the door doesn't seem to be able to open. Halp plz.

good demo or lite version ^^
beautiful sound creepy ^ ^ but what is going on with the stone: P
'm looking forward to the whole game ^ ^

Wow, I seriously wasn't expecting to see let's plays of it, I really liked it. Thanks!

Let me guess: You'll continue working on it later?