A world that constantly changes and that's driven by player interactions. In Realm Zero, you control the evolution of the game and surrounding elements. This includes everything from monster spawns, resource nodes, territory zones and player housing!You have complete control over the progression of your character, without permanent commitments. With our skill based system, you have the freedom to create a truly unique character to meet your play style!Straying away from traditional MMO game play, we offer FPS combat! With this fast paced game, there is never a dull moment! Removing the need for countless hours of grinding, jump right into the action and demonstrate your true player skill!

When I first began this project, it was on a very small scale and utilized only a single 400 x 400 terrain (world) tile. This also played a huge role in the network transmission between players, basically everyone connected would receive all packets. I was aware that one day there would be multiple terrain tiles and even multiple instances such as dungeons, training areas, etc. So throughout the course of development, I always held that information in the back of my mind when designing the network architecture. Essentially I had to create a programmatic way to keep track of the players and only transmit player data when they were within range of one another.

My original idea was to perform distance based calculations before the packet transmission. This approach simply wouldn't work as it would be a huge performance hit and ultimately result in delayed packets once the server held any significant player load. This led me to seek out another solution to consistently manage player location and without any complex calculations keep the players updated with vital information. Then is when I decided it was time to remove the windows form aspect from the server engine and encase it entirely inside of the Unity3D framework.
Can a 3D intense framework could run on a server that didn't have a graphics card?


Initially my first thought was no, however it’s possible! Since Unity3D applications can be launched with conditional parameters allowing you to disable the 3D rendering aspects and even run it without a window all together.
The command is: -nographics -batchmode

Now that the server is running inside of Unity3D, I can take advantage of all the engine has to offer including: physics and collision detection! Keeping track of world and player physics server-side is a must for any online game that doesn't want to be ridiculed with hackers. It’s very easy to hook into a game client and modify game variables to allow your player to move faster, jump further and even fly. However, since the server now manages and checks these conditions it’s also very easy to find out who’s doing something they are not suppose to be doing and even cause them to “snap-back” to where they actually belong in the world. 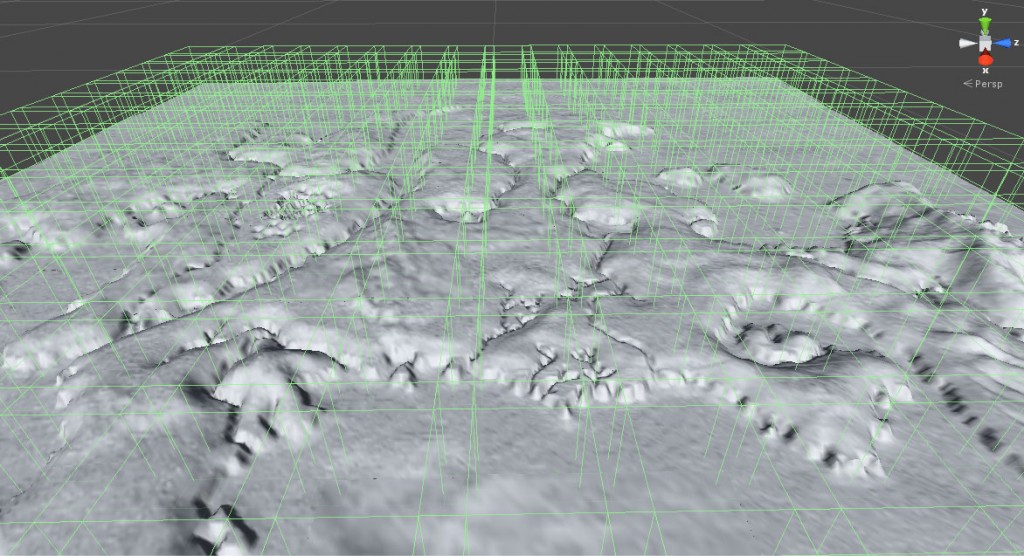 The second part of this is zone management and tracking the players location at all time. I've designed a real-time player tracking solution utilizing box colliders that are 25% larger than the actual zone and allow for zone sharing. As you can see from the image there are sections that overlap neighboring zones and in the corner of all interior zones there is a total of 4 overlapping zones. This is very important and is the bases for the design implementation.

Upon successfully loading the player reserves a pointer to the new player for fast data transmission. Now without any additional checks the system knows exactly who needs to receive the packet information! The reverse is also true for unloading a player from a zone. 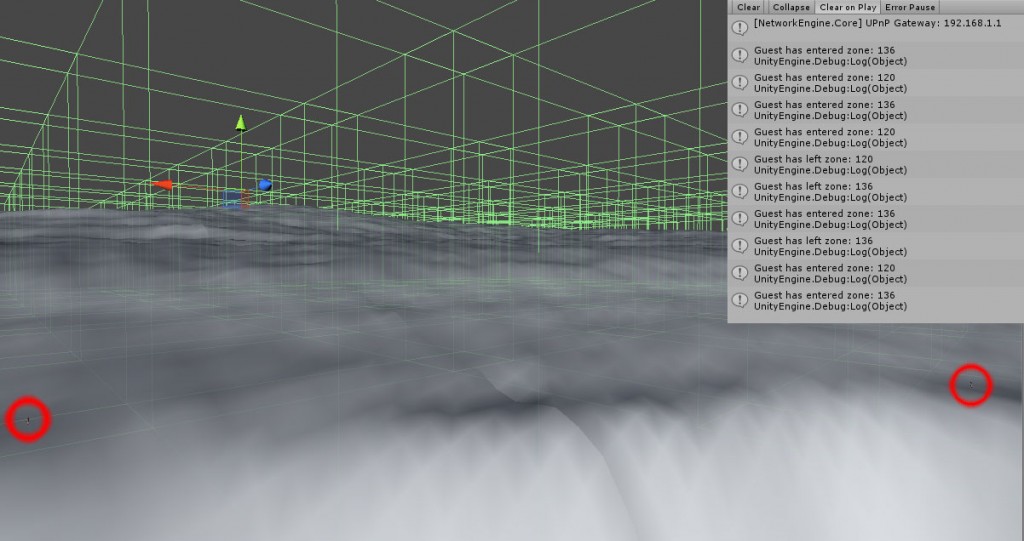 The next phase of development includes adjusting the code for environment tree generation. These adjustments will allow spontaneous generation of trees across all terrain tiles which have a valid spot for placement. A valid spot will be determined by terrain elevation (since we can now check that server-side), the elevation check ensures that a tree will not be created underwater or on mountains. The second part of the system, which is already implemented ensure that new trees are a certain distance away from existing trees.

Then finally pushing this change to other world items such as houses, dropped items, monster spawns and world effects. This will allow players to utilize the same 25% zone buffer to load/unload these items. This is an important factor and allows a zone to load before it becomes visible to the player. This technique will help keep game performance high, while keeping consumed memory low.

Since the alpha release a few patches have been published to address some minor performance issues and glitches. We've also implemented a new lobby/creation...

You can now download and install the game client! This will allow everyone to patch the game files before launch day to help avoid slow download times...

Alpha phase 2 is less than two months away 12/20/2014 and quite a few questions are starting to arise about the release. So I wanted to take a few minutes...

With Alpha Testing slated to begin December 20th, we are officially putting together our QA Focus Groups to help test and implement the main core and...

There was an issue with the forum sending out notifications. This issue has been resolved.

Make sure you read the article above, We've now entered closed alpha and new access has been restricted for Alpha accounts.

However, you can choose one of the options from the link below and access will be granted to your account.

You can still register and try out the game.

The next patch should go live next weekend, which includes context menus, smelting, wood refinement, and a few Blacksmith recipe.

Great work don't let haters stop or discourage you from what you doing they are only jealous for not being able to get anything done.Best of Luck

That's all pre bought unity store stuff be warned. A junior high kid could put that together in a few days easy. To many not real developers using unity last 2 years.

Dont be fooled at this point I really don't see a lot work in this project.

I'm sure your expert opinion is very important, just as i'm sure you took the time to look through the website.

Had you taken that time, you would see this project was started 2 years ago developed in C++ and OGRE3D. About a year into the project after most of the networking code was designed and the core concepts implemented, I switched to Unity 3D.

I started this project alone, receiving much criticism much like you are dishing out now. It's no surprise that I use some pre-built assets from Unity, only an idiot (working by himself) would try to do everything with a limited 15 hours per week. I actually use about 27 different Unity packages all combined into sweet sweet harmony.

I'm not a graphics artist, I'm a software engineer with 20+ years of experience. I have written countless amount of code (original) and heavily modified others. Our game is currently up and running (networked) with a lobby, queue system and more!

When it comes to graphics I wouldn't even attempt to create armor, goats, pigs or even trolls. I leave the troll creation up to the masters.

Glad to see the revitalization, what's in store for us??

Quite a bit actually. Development is moving at a rapid pace now that most of the groundwork has been laid. Don't get me wrong, I still have a lot to code, but this year has been great and tons of progress in the new engine.

After the Alpha launch, players can look forward to a new patch every 1-2 weeks. These patches will include fixes, features and additional skills and features as we progress.

Soon, (Next Week) I begin a vicious cycle of improving the character system. Currently there are over 500 animation to implement. Things like mounted combat, weapon types: 1-handed, 2-handed, staffs, etc. During this time comes some improvement to movement style. I'll be separating animation cycles to increase the fluid movement and preparing the player for COMBAT!

I'm trying very very hard to get spell combat implemented before Alpha release and currently it's looking pretty good. In the event it doesn't make it... :( It will come in the following month, but we are aiming for success!