Journey through a vast kingdom, fight monsters with your dazzling powers, and dive into an epic quest for the right to your own life !

Once upon a time, in the Boredom Kingdom, all things lived in peaceful coexistence, from humans to cute little bunny rabbits.
The world was free from war… hunger… fear… And it was boring. So very, VERY boring. So boring, in fact, that even the Devil found himself dreadfully bored. He dreamt of bloodshed! Lives torn asunder! Fire, brimstone, and the like!
So the Devil devised a plan to torment those pitiful, comfortable, BORING humans. He unleashed the Curse of the Eternal Night, a powerful spell that awakened bloodthirsty monsters across the realm.

The humans, however, quite liked their boring little lives. They weren’t just going to sit idly by as monsters destroyed the kingdom… So they called upon a masterful wizard – the only sorcerer powerful enough to put an end to the curse.
The Devil – enraged, yet still a little bored – retaliated by summoning the soul of Jack into the skin of a pumpkin. He then sent Jack to the kingdom with one mission: find and destroy the wizard.

“Thus, Jack would become the center of the ongoing conflict between humans and monsters…”

Pumpkin Jack is a 3D platform game based on unique game mechanics that make the gameplay highly varied and intense.

These dynamic real time battles call for strategy as well as reflexes. The player must master the arts of dodging, timing, and movement to vanquish Jack’s foes. Jack can utilize special abilities or choose the correct counter weapon at a critical moment to defeat his opponents!

Will you pick the Axe, the Fork, the Shotgun? Or something else entirely..?

These puzzle sublevels, entered by finding pumpkin-shaped pillars, focus on physics, gravity, and reflection. In each room you are presented with a riddle, and only finding the correct solution will allow Jack to progress. In this mode, you inhabit a pumpkin to roam around!

Burn books, hammer some moles, create a path for magic spheres... and more!

The enchanting quality of Pumpkin Jack comes from its haunting universe and its strong artistic direction.

All the settings carry a feeling of epicness and drama with eerie Halloween-themed environments. Indeed, the player journeys through 7 different levels, each with its own atmosphere.

Wander through apocalyptic fields, before travelling through a town torn apart by the evil… and much more !

Pumpkin Jack invents its own unique cartoon universe inspired by the classic PS2 graphic style, brought up to date thanks to the latest technology.
Jack’s world comes to stunning life through the combination of a sumptuous, vibrant palette and a wide range of color tints. Players are further pulled in through high quality lighting effects and a meticulous attention to atmospheric detail.

The Steam Page has just been launched... 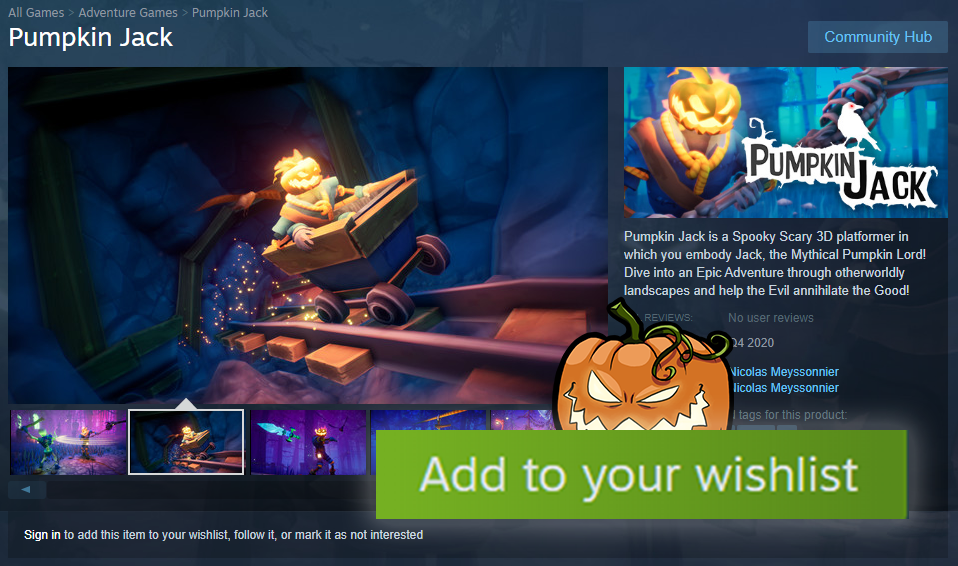 Visit the link to have any information you need about the game, and of course WISHLIST Pumpkin Jack if you're interested!

The Steam page is a nice recap of what is the game, what does the game looks like and what is important to know about it! There's also a bunch of exclusive screenshots that you can't see anywhere else, so do not hesitate to jump on the hype train and follow the game! 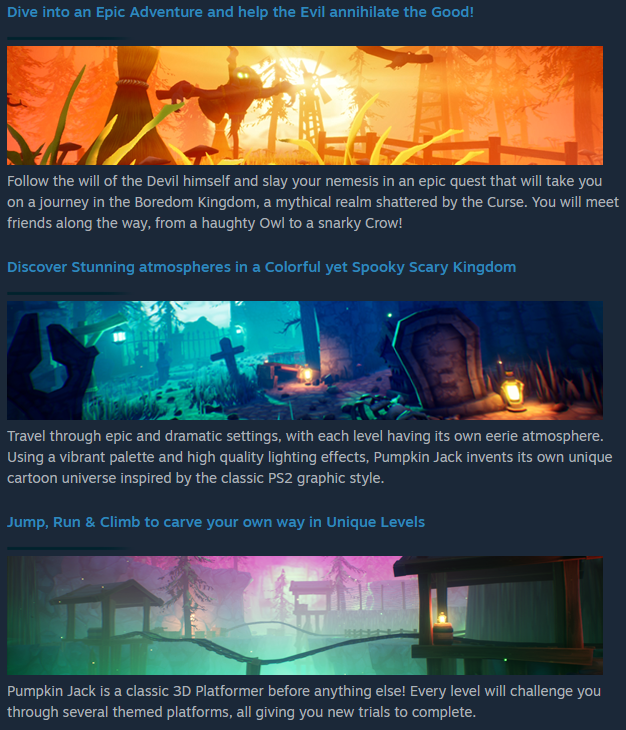 For this very, very special occasion, we wanted to thank all our followers by doing a giveaway of Jack's miniature! It's a unique one, and a hand-painted one aswell! So do not hesitate to enter the contest on Twitter to win it!

You have until 12/11 to enter the contest and win the prize so you shouldn't wait too long! 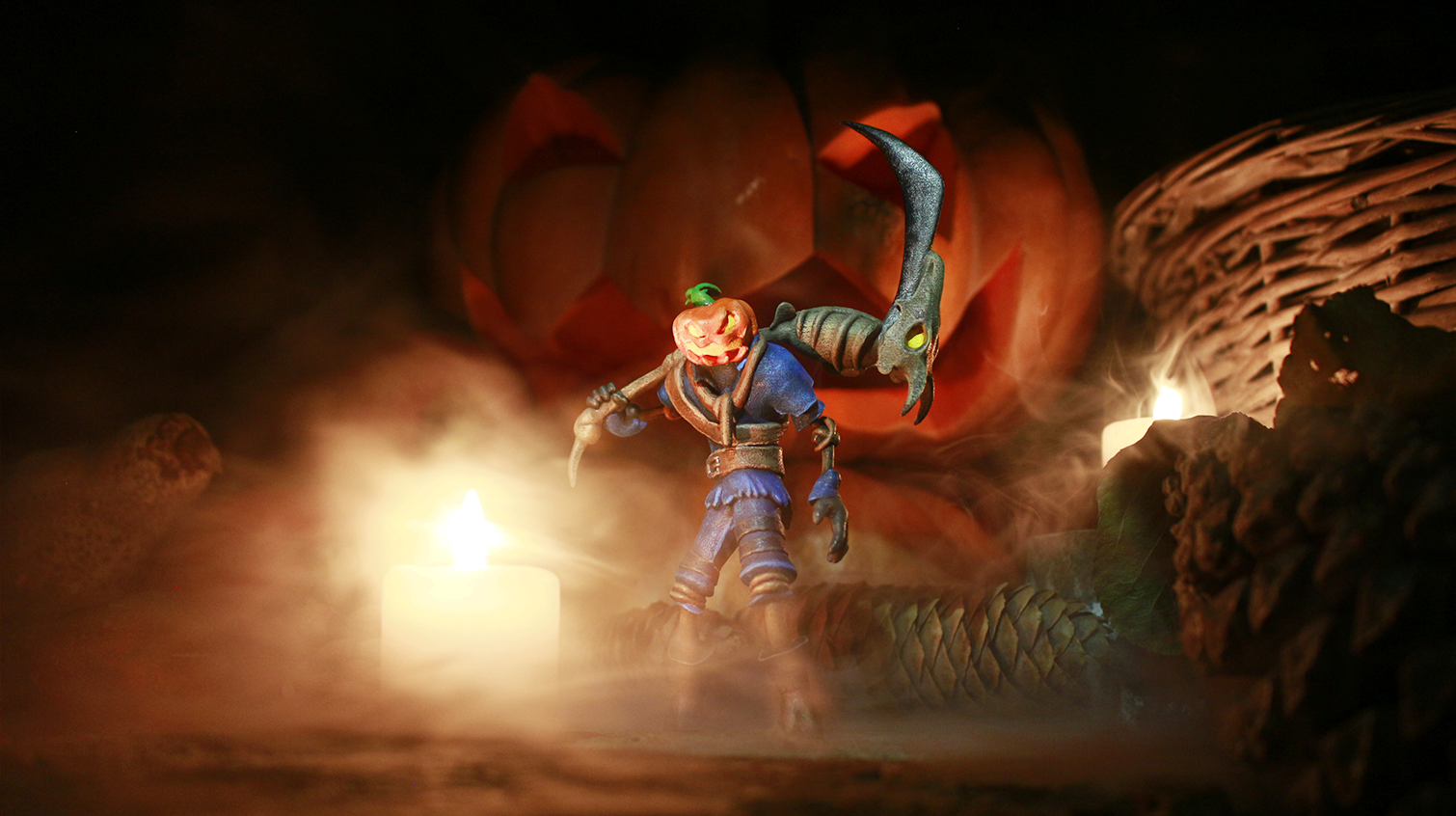 That's not all... Because there's an Halloween special trailer!

This is a remix made by a friend of "Spooky Scary Skeletons" by Andrew Gold! I really enjoyed making this trailer so I hope you will love it too guys :)

Second devlog for Pumpkin Jack! Discover with screenshots and videos what's new about the Dark Woods level of Pumpkin Jack!

First devlog for Pumpkin Jack! Discover with videos what's new about the game!

🎃 Pumpkin Jack DEMO is out ! 🎃 Download and try the game for free :)

The biggest indie gaming stories for the week of June 23 2019.

Simply brilliant. I can feel that Burton'esque style running in the veins of this game, dressed like MediEvil and moving with grace of Jack&Daxter. It makes me feel nostalgic and recall such masterpieces like The Nightmare Before Christmas, Corpse Bride and MediEvil. Gothic Horror mixed with Black Sense of Humour and wicked vision of the world of the Undead ;> Looking forward to play full game

Thanks so much <3 One of my first wishes while creating Pumpkin Jack is that it can make people feel something nice, and of course feel nostalgic. I hope that once the full game is released the game will be able to bring you back to your childhood memories!

Thanks! I hope you enjoyed the demo :)

Prince of Persia 2: The Shadow and the Flame Platformer