A 2D Fighting Platformer with stylish animation and mechanics. Swap between 4 unique characters on the fly and explore a digital word. Project: RUDRA is a 2D action platformer with a wide range of combat and platforming mechanics. Set in a virtual world made real, you play as 4 completely unique characters with abilities that harness the power of the RUDRA network. Fast, team-based gameplay and entirely unique playstyles across 4 characters is what sets it apart. Each character has their strengths and weaknesses.

Set in a virtual world made real, you play as 4 completely unique characters with abilities that harness the power of the RUDRA network. Fast, team-based gameplay and entirely unique playstyles across 4 characters is what sets it apart. Each character has their strengths and weaknesses.

If you'd like to learn more about the story, please take a look at the official website: Projectrudra.com 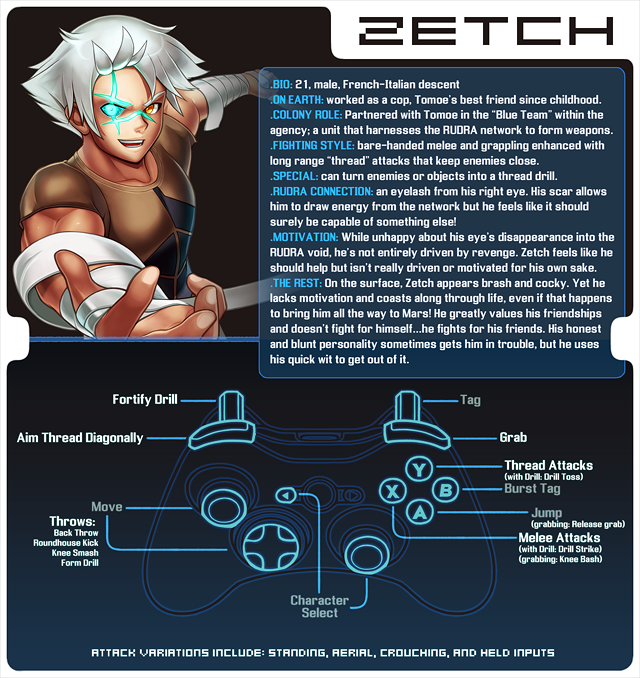 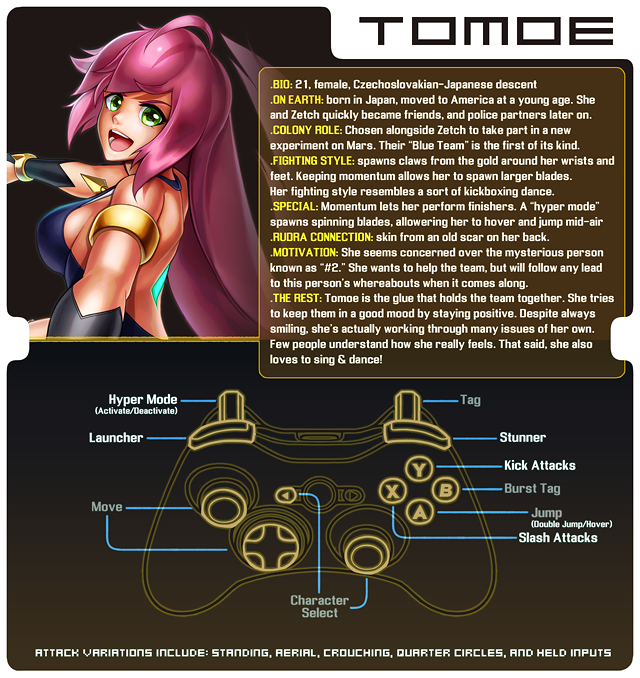 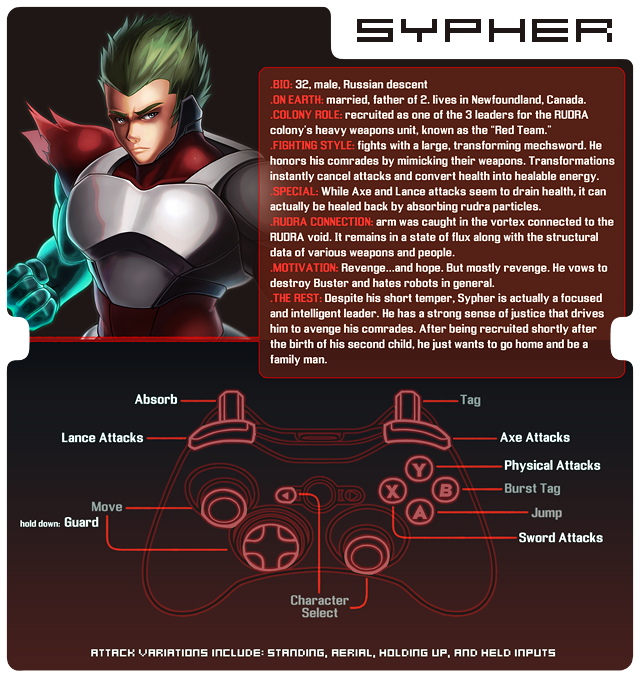 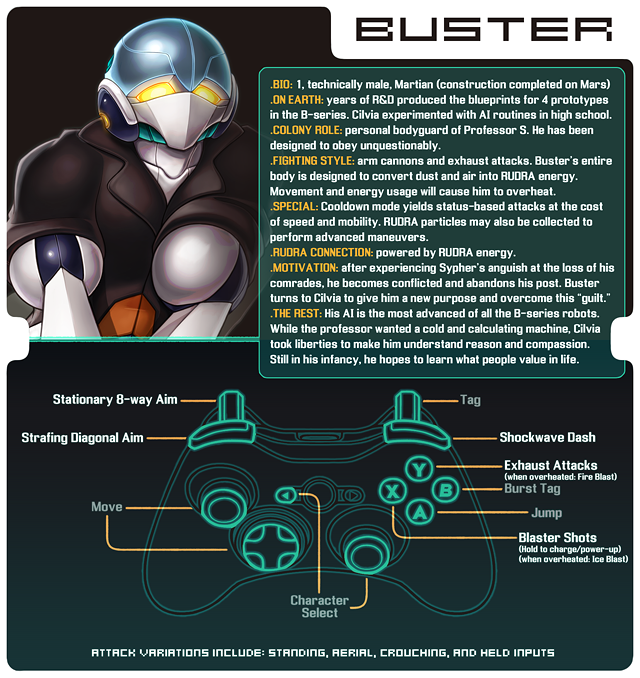 I've been drawing these guys since 2007. They've changed quite a bit since then... 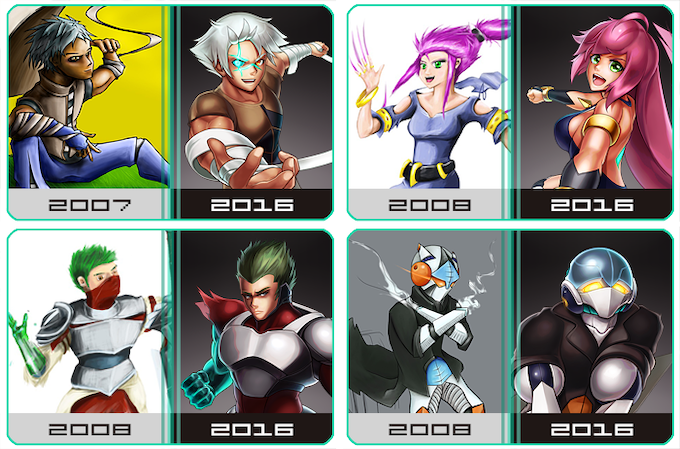 Their personalities have inspired their movesets and the levels are designed around their moves as you learn them. PROJECT: RUDRA is entirely driven by its characters.

A wealth of movement and combat mechanics make moving and fighting feel great.

Tomoe is all about long combos and air juggles.

Characters have at least 12 unique attacks across standing, jumping, and crouching states. Execution is a breeze as most are performed with a single button, with the occasional quarter circle (and it's incredibly rare). Explore your options and play how you want! 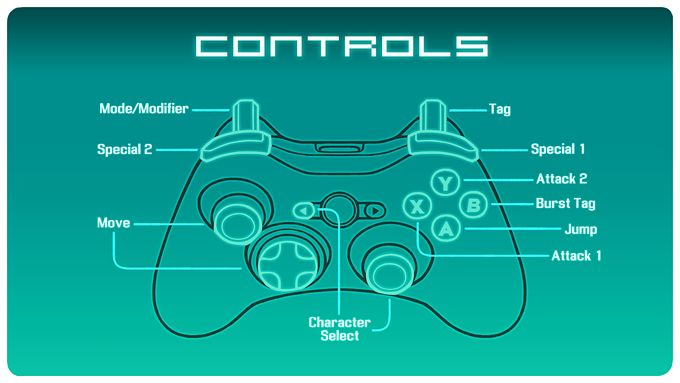 Their speed and mobility varies, but it's supplemented by their special meters. Sypher is slow, but speeds up at low health. Buster is fast, but slows down and takes damage when overheating.

Buster is quick and nimble, almost like a figure skater

Switching characters happens with the press of a button. There's no need to start the level over, just pre-select with the right analog stick or the select/back button:

Then choose how you're tagging in:

The "burst tag" lets you come up with unique combos!

While there will be times when you have to play as a certain character to progress the story, I want you to have the freedom to use your favorites as much as possible. Revisiting levels to find upgrades and collectibles can be done with everyone you've unlocked, and you can do so at any time.

Player progression is based on finding hidden collectibles and defeating bosses. By exploring and looking for hidden cracks in walls, you may find upgrades or entirely different paths! 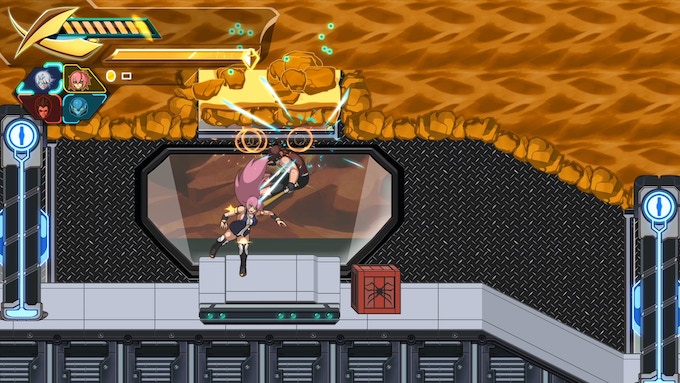 Launch an enemy through the ceiling to find a hidden path!

Along those paths you may find a fountain like this. Crack open the golden diamond...

Digital energy flows from within the diamond. What could be inside??

And you'll find upgrades or "inspiration" icons like this:

That let you do this!

PROJECT: RUDRA takes place in a digitized colony on Mars. What was once an experiment, is now reality. Among the usual deserts you'll also find snowfields, volcanoes, and a world made entirely out of cakes! Each world is based on the ideals of its master.

Platforming is just as important in PROJECT: RUDRA as the combat. Levels are fully designed and tile-based, so you can always discern the ground from the background.

Fight it out with over 18 unique bosses ranging from human-sized to screen-filling! I don't want to spoil too much, but here's some dialogue portraits to give you an idea:

Remember to pay attention to the type of enemy you're facing to maximize damage or aim to make them dizzy for longer combos!

PROJECT: RUDRA's animation is inspired by anime and fighting games. All animations have uniquely drawn frames rather than limbs that stretch and rotate. Attacks are smooth but snappy. There's no point in having a cool animation if that smoothness gets in the way of fast gameplay!

in-game sprites are 6.5% of their working size

Framerate and hitboxes are fine-tuned to the individual frame. If an animation seems long, you can probably cancel it into something else, or it has long recovery to balance out its strength.

Did I mention everything is hand drawn? Even explosions!

Melodic tunes are the lifeblood of the best platformers. A game could look and play wonderfully, but would be mostly forgettable without the music to back it up.

Over 60 songs are planned for release!

Check out the kickstarter! Kickstarter.com