Bionic Commando Rearmed 2 is a side-scrolling, action-puzzle platformer in which the player
takes control of Nathan "Rad" Spencer, the returning hero of the previous games. The game
closely follows the structure and mechanics of its predecessor, with one major exception, players are now able to jump.

Players are challenged to navigate the maps by climbing, grabbing and
swinging with their bionic arm. In addition to the pure navigational challenges there are different
kinds of enemies patrolling or guarding different areas of the levels. The game features plenty of
weapons and arm upgrades to help the Players defeat the various enemy types. Each chapter of the game ends with a boss level. The bosses are large to huge sized pattern-based enemies.

BCR 2’s story revolves around Spencer and his team of bionics who are looking to stop General Sabio from launching his WMDs. The tongue-in-cheek humor of the Bionic Commando universe is a vital component of the story. All levels (both story and challenge rooms) are timed and ranked on leaderboards. The entire game can also be played in couch co-op mode.

To promote Bionic Commando Rearmed 2 and grow its popularity (top games), use the embed code provided on your homepage, blog, forums and elsewhere you desire. Or try our widget.

Sure Footing the intensely fun addictive infinite runner, experience the fast paced, play it your own way, cute and vibrant infinite runner whether it...

ScourgeBringer is a fast-paced free-moving roguelite platformer. Help Kyhra to explore the unknown and to slash her way through the ancient machines guarding...

Not for the faint of heart, Bot Gaiden is all ACTION, EXECUTION, AND SPEED. Ninja robots Robyu and Bytron race to recover the power skulls that have been...

You have been locked in a prison where illegal genetic experiments have been going on. The scientist figure out how to genetically make anyone go into...

Function.repair is a fresh new 2D platform shooter with a unique, no-gravity movement style. You assume the role of Fixbot, one of the many fixbots, who...

This game follows the Disney/Pixar movie of the same name. The player takes control of the main protagonist, Wall-E and his friend EVE. The gameplay of... 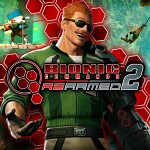