You command the Steel Dragons, a mercenary outfit fighting for survival in the harsh, urban near-future that is Haven City. Select and control squads of mercs as they battle gangsters, rival mercs and corrupt government forces in a bid to make ends meet, and make a difference where you can. Manage your crew’s stats and gear, wrangle a diverse range of merc personalities, and conquer the deep tactical elements that make Project Haven a standalone turn-based combat experience.

Yeah, it’s been a bit since our last dev update. Months, even, but don’t mistake the radio silence for inactivity. We’ve just been down in the code-mines, working intently on Project Haven to the exclusion of everything else. We probably should have come up for air a few times, but we’ve got SO much we want to show you now.

A lot of our work has been on finalizing late-game content that we want to keep under wraps until launch, but there’s still plenty more we can show you. Let’s dive in!

Game design is an iterative, experimental process, and we’re constantly learning new tricks and skills along the way. So that we’re not saving all the best for last, we’ve been revisiting some of our earlier missions, making visual and mechanical improvements to better match the quality of the later maps.

Check out the before/after comparison below! If you’ve played the Project Haven demo previously, you should recognize the environment, and just how much it has improved.

Another field we’ve made major leaps forward in is our character art pipeline. Previously, our character models were a bit of a compromise, trying to squeeze out the best designs we could from a relatively limited system.

Since our last update, we’ve completely overhauled how we handle character art, and the result is more distinct designs with more personality but produced in a fraction of the time - given that we’re a tiny independent studio, that’s an enormous boost in productivity for us.

You’re sure to see the improvements made across the campaign, and especially in our cinematic cutscenes, but also in the increased variety and quality of background characters like civilians. Still, the most striking improvements will be seen on our main cast. Here’s Fang after his makeover: 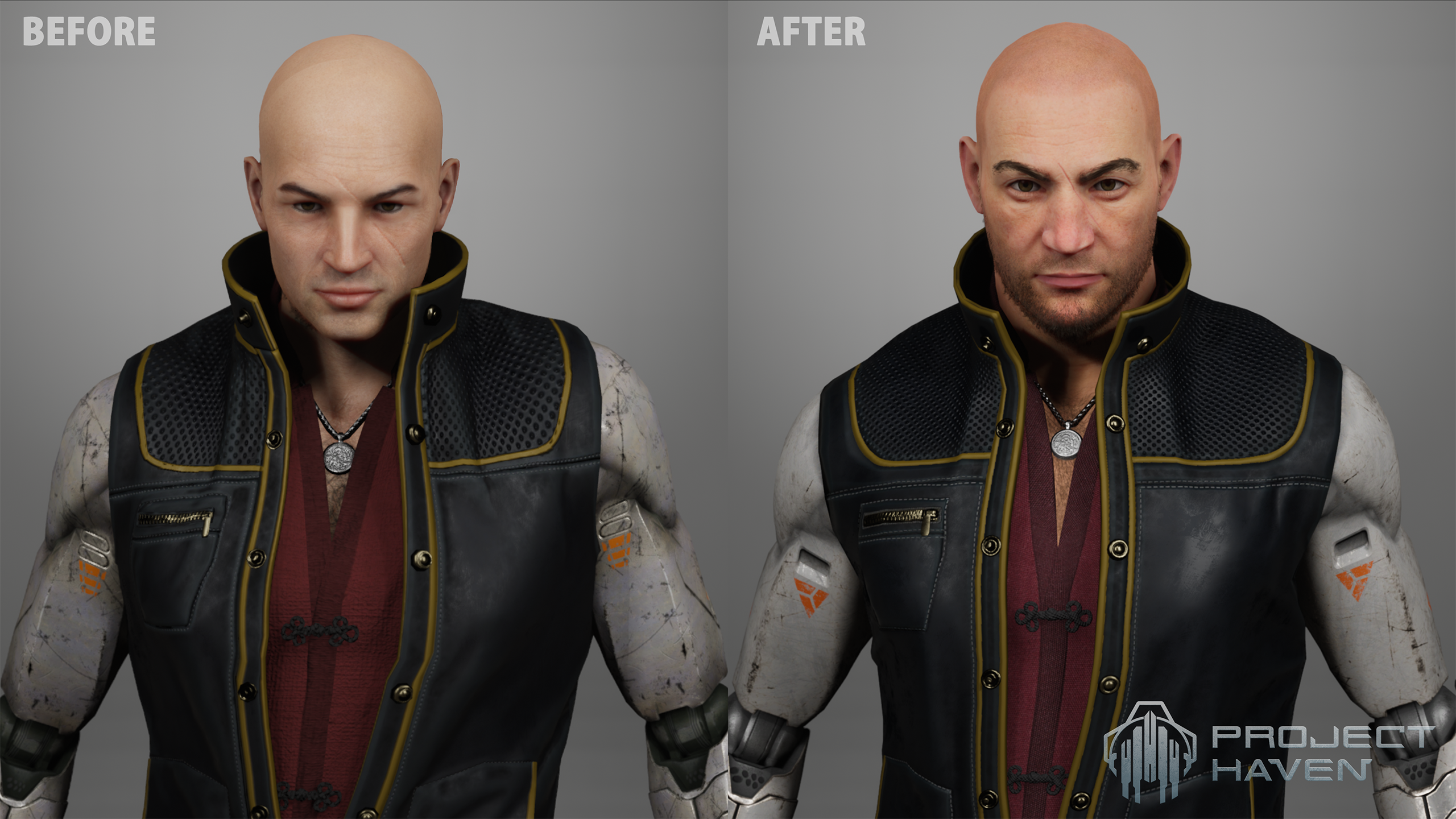 Everyone’s favorite (or most loathed) cyber-meathead hasn’t changed fundamentally, but we feel his updated face has a lot more character, better fitting his voice. The 3D mesh of his clothing has been updated as well to be cleaner and more efficient. This rework was done much quicker than the original character modeling process, thanks to our new art workflow.

For those wanting a deeper peek at what’s changed, take a look at the wireframe comparison below: 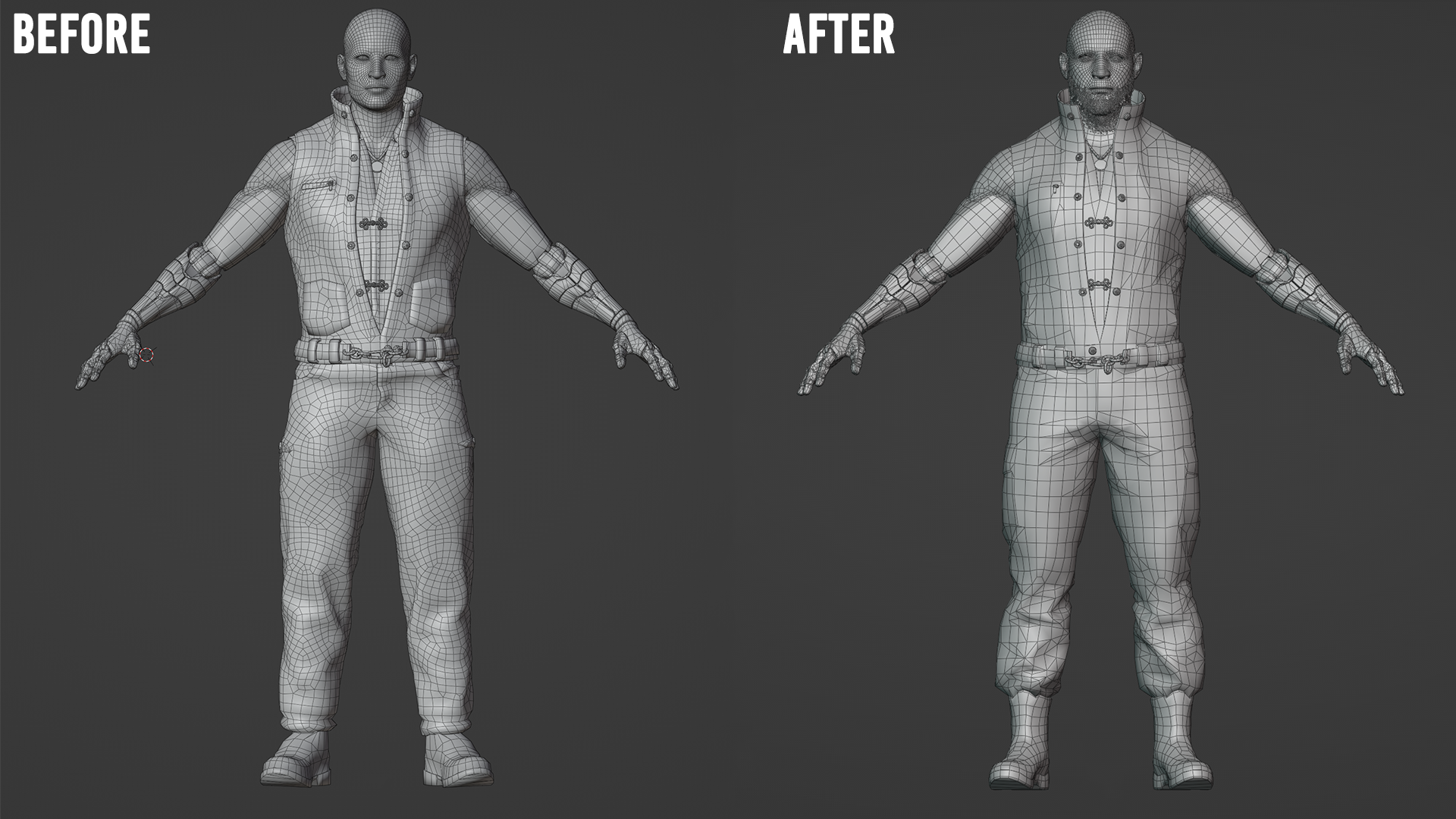 One of the biggest improvements we’ve made is a modular character art system, allowing us to create more varied minor NPCs by mixing and matching heads, bodies, clothes and more. You can see the improvement immediately in the nightclub scene below, now with a much less strict dress code:

Whew, that’s a lot of art improvements! Our improvements are more than just skin deep, of course, so let’s talk gameplay next.

As with any squad tactics game, a good, clean user interface is essential. After several rounds of iterations (taking all our user feedback into account), we’ve overhauled the UI. It’s now cleaner, sleeker and more functions are easily usable without having to memorize hotkeys. 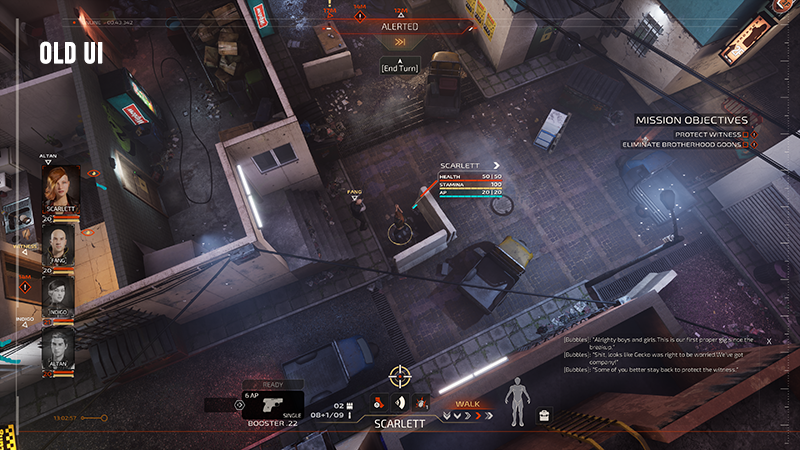 A key focus of our redesign has been accessibility. Useful for many, but especially those who play turn-based tactics games due to their more mouse-friendly interfaces. We’re proud to announce that every feature, mode and toggle is now fully accessible using just the mouse.

As well as making all the basic functionality easier to access, we’ve added a few highly requested features to your tactical options.

Now you can manually control the power of grenade throws (for when you want to land the perfect trick shot), and use open doors as cover. Just remember that thin wood isn’t going to stop a bullet.

And that’s it for now, but by no means all the improvements we’ve made to Project Haven over the past few months. We’ve plenty more to share over the next couple updates, so make sure you wishlist and follow the game on Steam!

If you’re still hungry for content and are still catching up on all things Project Haven, check out this narrated gameplay video over on IGN from December, featuring some of the changes and improvements we’ve talked about here.

We also made the cut for Kotaku’s ‘25 Exciting Indie Games To Wishlist Right Now’ list - a great-looking crop of games that we're happy to share the spotlight with!

And we talked with the prestigious art-focused industry site 80.lv about Project Haven’s development where we show some previously unseen behind the scenes! There’s even a French translation for any francophones reading this!

And of course, if you want up-to-the-minute updates on Project Haven and all things Code Three Fifty One, give our social media accounts a follow. In-between big dev-logs like this, we post regular small updates to Twitter, Facebook and Reddit. And if you want to really get down in the trenches with us and the rest of the Project Haven community, join our Discord server.

Until next time!
Code Three Fifty One

Check out Project Haven's progress highlights and see your most frequent questions answered in our October's Development Report.

Project Haven is a deep, squad-based tactical game set in “the last city of Earth, Haven”. Players get to experience cutting-edge technology that...

Project Haven has been awarded with an Epic MegaGrant.

Thank you so much!
If you want to get a closer look of the game's development, or just get in touch with us and the Project Haven community you could join our Discord server (https://discord.gg/fFMd8FU) or just follow us on Twitter (https://twitter.com/foresightgames) to get updates.