Project-Cleaners is an Adventure/Investigation game with some RPG elements. The player takes control of the Vericia Cleaners Grendy Flisk and Klenda Fols, some kind of "detectives" which goal is to secure the city of New Vericia from the Monsters that keeps on killing the citizens and taking their place in society. Will you be able to solve the mysteries that surrounds New Vericia with your investigation skills? The game will give you complete freedom during your investigations by letting you point out culprits, search for evidence and such in anyway you want.

Project Cleaners: What is it?

For all of you who have been wondering "just what the heck is this game?", well, here's the answer.

Project-Cleaners is a 3D Investigation\Adventure game. You are a Cleaner and must solve cases regarding Monsters who stole peoples' identity, taking their place in society. The game will give you complete freedom over the course of your investigations by letting you decide who might be the culprit, what's the first thing you should examine, who should you interrogate first, eccetera eccetera.

The story will shape based on how you carry on the investigations. Constantly catching the wrong culprit, for example, will surely lead you to a really bad ending.

So, in a nutshell, the game focuses heavily on investigating the various murder cases and it also relies on its main plot.

What's the game's story about?

In Project Cleaners you will take control of Grendy Flisk, former citizen of Old Vericia and now a Vericia Cleaner, and his partner Klenda Fols, a beautiful but deadly girl.

The Cleaners are part of a secret organization created by the government leader Castilia Prince. Their purpose is to prevent the Swamp Monsters from taking over the city of New Vericia.
These monsters are creatures who can literally steal someone's identity by killing and taking their place in society and as such they are a threat to the people of New Vericia.

Flisk is also working with the Cleaners to solve all the riddles regarding his past and his affiliation with the deadly Red Scarves assassins.

Will Flisk manage to reveal the truth and solve all of the mysteries that surrounds the cities of New Vericia and Old Vericia?

The game heavily relies on its storyline, giving too much away wouldn't be a good move.

And how's the gameplay?

We can say that Project Cleaners has three different phases.

The first one is the investigation phase, where the player needs to solve one of the three cases in the main game. This step requires a lot of thinking, the player needs to examine things, to talk with anyone involved in the case and to use his own logic to reveal the truth. This will make him able to point out the right suspect as the culprit. As I said early, the player has complete freedom over the course of the investigation. Who is the culprit among the suspects? You are the one that need to answer that question.

The second one is the Combat and Exploration phase. Project Cleaners has a real-time combat system. Flisk can fight monsters (or humans) using his gun and with the help of his partner Klenda. Some of the battles in the game require a certain degree of logic, Flisk can give direct orders to his partner and can use the environment to his advantage.

The third one is Origin, which we will cover up in the future.

What can I expect from this game (features and such)?

-Three main cases to solve, each related to the game's main storyline
-A lot of subquest to solve as well
-Different skin for Flisk and Klenda, from useful ones to "funny" ones
-An online Leaderboard which will make the players compete against each other
-An amusing and particular cast of characters
-Multiple endings

The prologue of Project Cleaners is set to be released in Spring/Summer 2014. Stay tuned, we really want to release this game as early as possible but we also want to polish it as much as we can to avoid giving away an unfinished product.

Hold on with us and thank you for your time. :) 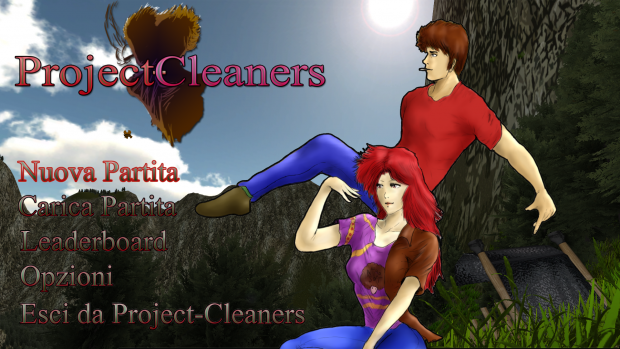 The gameplay video released yesterday is now available in English!

The thing, the "core", that makes Project-Cleaners so unique!