NYKRA is a narrative platformer pixelart game with puzzle and RPG mechanics set in an ever collapsing reality. You travel via a being named Keu through 7 different planets, unraveling the complex mess of reality ahead of you. But as you read through the alien literature, discover archaic long lost ruins, and delve your thoughts into the unfamiliar languages of the galaxy, you start to realise the 'dark virus' people fear might not be what you expect.

The game was developed by one person, EDG, over the span of 8 years, all while learning how to make games at the same time. There were a few unfortunate consequences of this, but it has made NYKRA quite a unique experience. EDG has always been more of just a designer at heart, so learning how to program and developing an entire game was a colossal challenge.

But NYKRA is here, after all these years of development and redesigns. 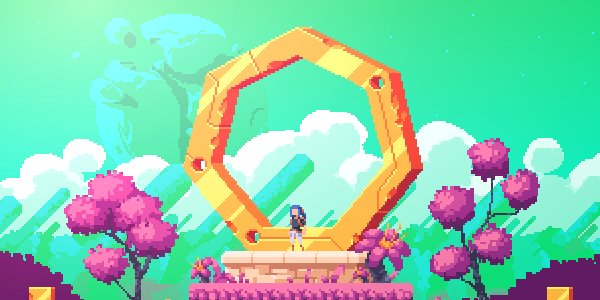 To promote NYKRA and grow its popularity (top games), use the embed code provided on your homepage, blog, forums and elsewhere you desire. Or try our widget.

A new army of Reploids known as the Repliforce is accused of crashing the Sky Lagoon. Now they are classified as Mavericks and are on the run. X and Zero...

From the creator of the Gundemonium Collection comes a thrilling new 2D action-platformer! Help Bunny escape the Devils’ Labyrinth and defeat the 7...

Triangulum is momentum based puzzle platformer. You must keep up your momentum or you will fall forever into the depths of the Triangulum.

A 2D action platformer adaption of the classic DOOM 1. Run and gun down all the demons in your way with all the classic Doom weapons!

Platformer that focuses on the atmosphere and exploration. We want to make something cinematic and very detailed to thoroughly describe the world of robots...

What if Doom was a platformer instead of a first person shooter? The answer is miniDoom 2, a fan game that pays homage to the Doom franchise by reimagining...