My Darkest Hour is, a 3D isometric survival game, set in the UK on the onset of a pandemic. As the protagonist, you have to survive, grow food, manage day-to-day chores and face the dangers of the ever-growing hostile, starved and desperate population.

Development on MDH started in late July, 2013. Since then, we have managed to gain an extra artist, and start to work on the basic functions of the game. Currently, the lighting system has been partially implemented, with candles running out and having to be replaced. Now, we aim to work further on the basic mechanics and principals of the game, before we start to develop more advanced parts (Such as Enemy A.I.). We are in early development, and are open to suggestions, questions and even assistance.

Originally we were working with a side-on 2D art style since me and nebster were sprite artists, and 2D artists, at the time. While it originally seemed like a good idea, the drawbacks of using a 2D style were becoming more obvious. With the gameplay and mechanics we have in mind, restricting the player to two axis would be extremely limiting and would not tie in to the eventual AI system well. By introducing a third axis, it would improve gameplay and allow for the game to be brought more in line with the mechanics of barricading, dealing with AI break-ins, farming and general movement.

I have included an early render of the living room, recreated in isometric 3D. 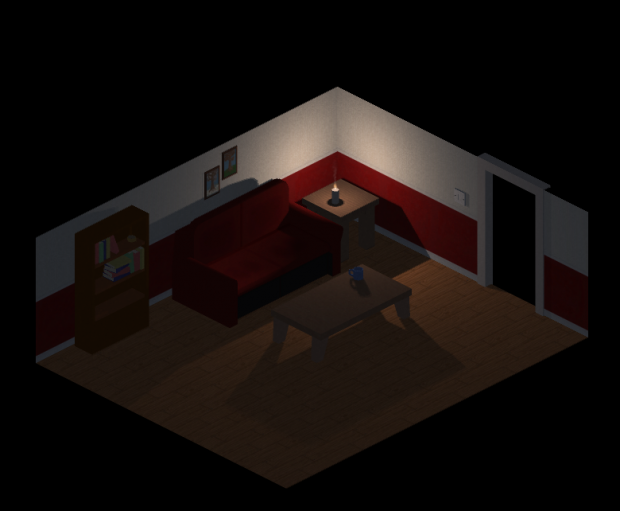 As you can imagine, the move to 3D means that it now takes a considerable amount longer to create the environment and art assets. I have more experience with sprites than 3D models and textures so at the moment this is also a learning experience for me. However as we have no time restriction on the project, it means that I can put far more detail and interactivity into the game, which I love the idea of. I am very happy with how the look of the game is turning out and I personally think it is a vast improvement over the 2D style.

I am now devoting more time to the project so look forward to seeing more art and news than usual.

See you guys next update,

Death of the Project

I do not want to get your hopes up, so do not take this to mean that the game is definitely being made with a demo and release in mind. It is all up the...

I have some Explaining to do...

This post will hopefully excuse the lack of development anything to his game because I really do feel I need to rap this up and not leave any louse ends...

Hello. We would like to show you that we have started work on the actually game, the planning and design stage is now coming to an end. With this in mind...

You project sounds great! Keep the job (i donwloading the BETA now)

Good luck to you, Steven & friends...posted this link to my gaming group (Central Wisconsin Gaming Enthusiasts)...we'll be watching eagerly as your "My Darkest Hour" develops!

Thank you. We hope to deliver a great game when we are done!