Molten Armor is available on Steam now!
Molten Armor is an action tower defense game with a non-linear story in sci-fi setting!
Command defenses and stop hordes of enemies! Fight on land, sea and in the skies!
Decisions taken in the heat of battle will change the course of the war.

So it's a little over a year now since Molten Armor was released >> on Steam <<
I've decided to summ up some information and my own thoughts .
Also, feel free to check Cold Shell >> Cold Shell - arcade brawler rpg << that I'm developing now (it's also amongst the top 100 indies here on IndieDB) 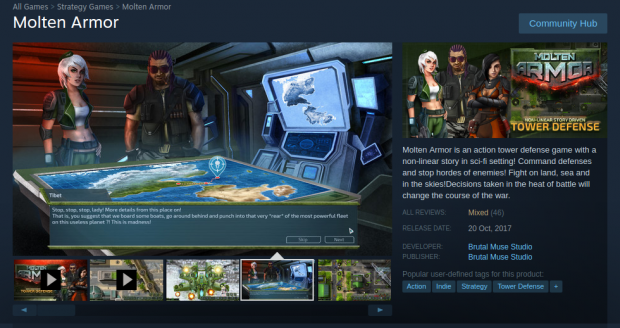 The game ended in mixed reviews with 65% being positive. While some people can say that it's not so great of a result I am pleased with that as it is. Molten Armor was my very first serious game as an indie developer. Some indie devs tend to criticize the reviews system for being non objective. But in my opinion Molten Armor got what it (and me, as it's developer) deserved. Being "somewhat above average indie game on Steam" is in fact great for a first game. Plus, there are lots and lots of things i learned about game development that one can't learn from just being endlessly stuck in the creation process and never releasing a game.

Reviews are an object of art by itself :)
Take a look at this :

The most helpful review is positive, which is really nice :) Also it was written by some sort of games collector (2500 + games on account, wow) .

Most funny reviews need no comments, i guess (poor guy Mark - i hope he is alright). 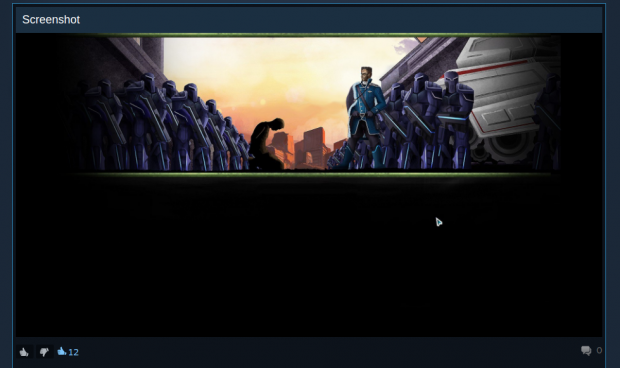 Most popular screenshot is one of the game's bad endings. Didn't I mention that Molten Armor has several endings, depending on what you choose on story forks? It was crazy hard to implement for a noobie developer like myself, but i did it in the end. Pro tip: don't make you first game non linear unless you don't know how to do it properly and have a well written plan. Those different branches require incredible amounts of time to implement both code-wise and art-wise. I'm serious on that one. Around 50% of the game's code is all about that story branches and dialogues. Get those walls of text written BEFORE you start coding it or you'll be in trouble re-doing it over and over and over again. 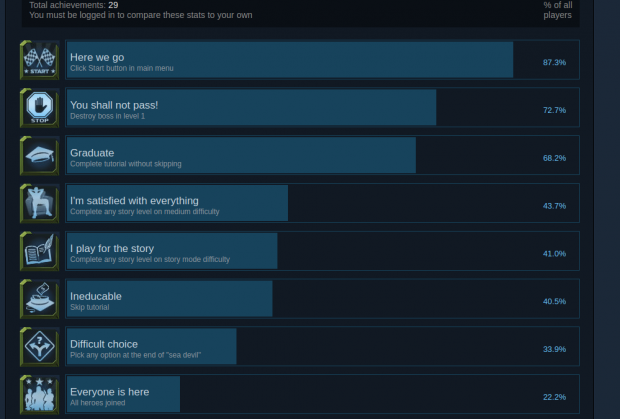 Steam achievements can be a powerful tool in right hands. I hate those sneaky software tools built into a game to get more information about a player that is frighteningly common nowadays. All i did was placing marker achievements at some milestone spots in the game. Anyways I have no use for some player's favorite food, but through achievements i can see some overall tendencies of how exactly folks do play my game and learn from it.

Looking at the global stats 87.3% of people launched the game at least once, 43.7% of people play it on the medium difficulty level and 33.9% have completed at least 3 levels (that's where the first story branch is).

The rarest achievements were pretty much obvious (to me). Looking from top to the bottom are:
- finding an easter egg (by hovering you mouse cursor over it) involving a cave and a skeleton
- facing consequences of a hard choice
- getting to see the True Ending
- getting to see ALL the endings
- completing the final level in the True Ending branch without missing a single enemy

While being overall positive about my game, there are certain and obvious flaws in it.
- Lazy text based tutorial in an action packed game was a huge mistake. It looked like a good idea on paper, not in reality.
- Some small and/or rare bugs still do exist. I've covered them to the best of my skills to minimize the chances of encountering them, but they are still there.
- Some amateurish game design decisions pest the game. Addressing them can potentially force me to spend 6 to 12 months of re writing code, which is unacceptable.
- Some hard coded stuff works terrible on some PC configurations. As for now i learned how to make games more flexible, but back then I've put really bad code decisions into the game's core systems.
- Really pesky settings and save/load system was the best i could do then. It ended up forgetting user settings which is frustrating.
- I lacked level design experience to make the first 2 or 3 levels good. End game levels are much more nice and are smartly utilizing gameplay mechanics.
- I was very bad at talking to the players. Yeah, i tried to be at least a bit active in game's discussions, until one moment. Some player encountered a bug and wrote a negative review. I've contacted that person, got info about the bug, got it fixed and returned with the good news. The reply was : "Whatever. I refunded the game already and won't change my review even with the bug being fixed". Well, here goes my motivation.

The release week (or two) are very stressful if you give a slightest damn thing about your players. Gonna release your first game soon? Embrace for the impact - it will hit hard. Not so many people care if you've created that game alone, or if you fix bugs as fast as you can. But it will surely make you stronger. Learn from your mistakes. Learn to read between the lines. Learn to distinguish between a bad review and a troll review. Don't waste your time on trolls, but try to help those who are in need of it.

I've learned from the mistakes i made. It was hard, indeed. But worth it. I've made a personal list of things i did good and things i did bad in Molten Armor. Those things that i couldn't deliver well enough were thrown away or seriously reworked from ground up in my design document for the next game. The things that i did well are highlighted even more. Now i know my weak and strong sides better. With that list in my head i went to a local gamejam about 8 months ago and won it.

Well done reading it all the way here. It means a lot to me.

This article tells about three days before and three days after release on Steam. And the release shuffle itself. If you wanna know how it feels - come...

They say that final 10% of making a game are the hardest. They are right :)

That's how we think up different enemies to oppose players (and game progress).