The townsfolk tell you that a woman named Julia has gone missing. You venture out into the cave just beyond the village looking for her. You’re given a knife to protect yourself. What you find there may surprise you. Moirai is an experimental, first person game created by Chris Johnson, Brad Barrett and John Oestmann. Moirai was taken offline on June 30th 2016.

I've written up a postmortem of Moirai on my website. I run through and explain the secrets of the game, design issues, reception, some stats and different takeaways. It's a bit of of a long read. Below are some of the interesting stats.

Number of Playthroughs Per Day Graph 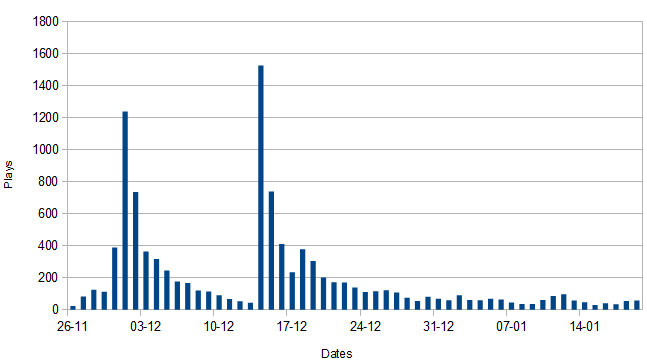 A big thanks to everyone who took the time to play through the game!

A version of Moirai for OSX 10.7(Lion) or greater is now online.

Moirai has been released on IndieDB

Experimental, first person game, Moirai has been released on IndieDB.

This was very unique and interesting and definitely worth playing.

Even though I am posting my youtube playthrough I would recommend playing it yourself before watching anyone else.

What a fantastic experience...

Give this game a try - I promise you won't forget it.

I gave this a play and was TOTALLY expecting it to be an unexpected, scary, jumpscare-esque horror game - But I was totally surprised with what I got instead. Great game, short - but innovative!

I made a Let's Play of my experience to for anyone interested in getting a look-see!

Wow! This was a really cool concept! Can't wait to see how it turns out.

Great concept, I totally dig it :)

Well that was unexpected. Started playing to see if it was worth making a video of, then got to the end and disappointed myself because is very much is, but I don't feel like it should really be played a second time...

Sorry if you are getting an un-authorised message for the download. I applied a minor patch to the game and now have to wait for IndieDB to approve it.

The Adventures of Peau Adventure