Tactical
Plan out your movements and attacks in detail with an ultra-modern tactical UI.

Gravity
Bend the paths of incoming enemies with gravity wells and lassos.

Old Skool
Looks like a SHMUP right out of an 80's arcade. In stunning 320x240 huggable pixels.

Physics
Adds a pinch of dynamism to proceedings.

Weapons
Nothing you won't have seen before... used in peculiar ways.

Story
A strange tale of vengeance and a lot of repair...

Side-kicks
AI Buddies play an integral part in the gameplay and story.

Bosses
Leave your reflexes at home. For the bosses you'll need to wear your best planning hat.

Now on Greenlight, come show us your support! 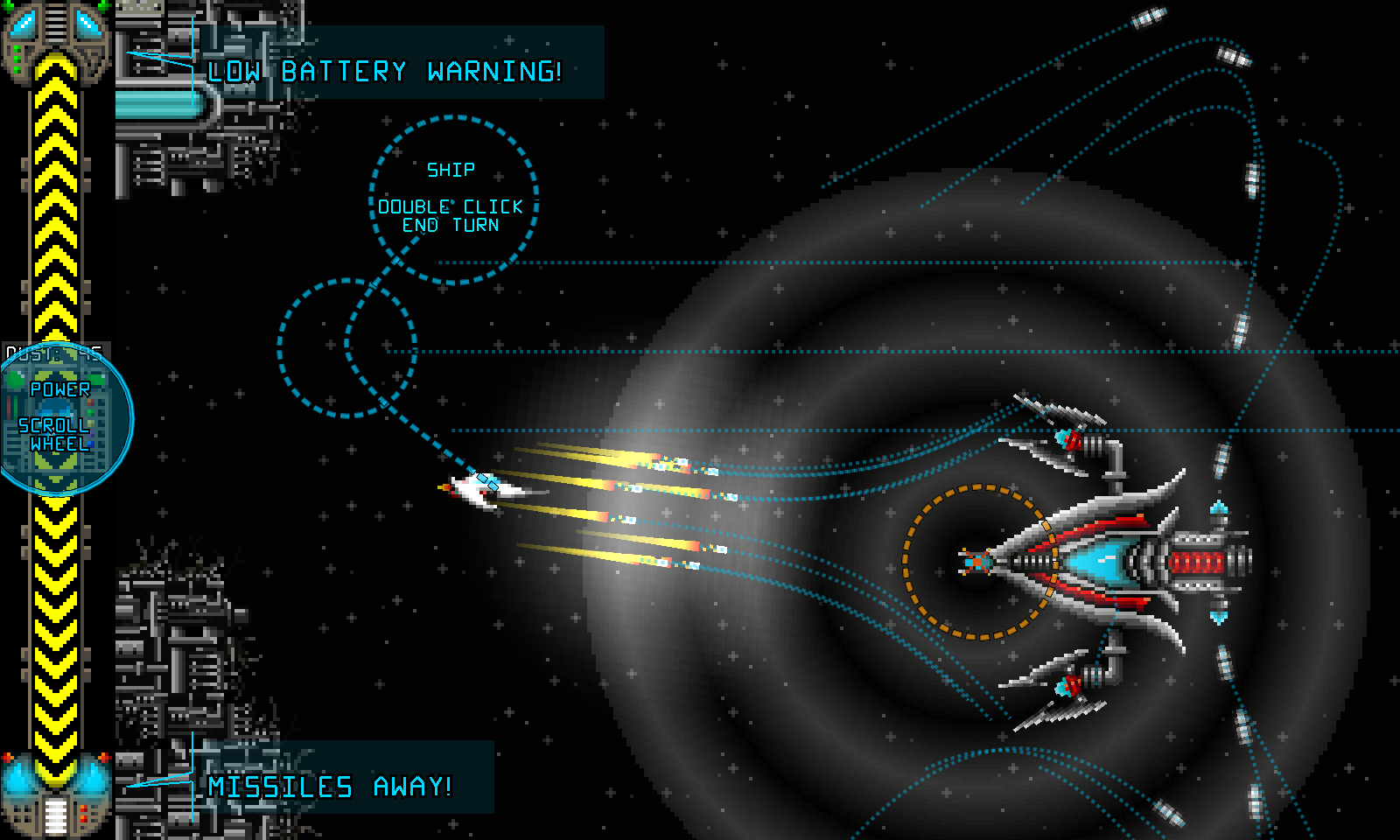 The much anticipated Kickstarter is now LIVE! You can download the pre-alpha demo from the Kickstarter page itself.

Also remember to vote for us on Greenlight!

Catch Up With The Updates

There have been some public updates along with the Kickstarter.

Firstly the Kickstarter video itself...

We've been very, very busy taking Mighty Tactical Shooter out to UK shows. The public response has been great, and we learned a lot about what does and doesn't work in the game.

We've had some great press coverage, but this Rock, Paper, Shotgun article is the highlight!

A quick update about progress on the game. Crushers, checkpoints and respawn, the UI, gravity weapon timeouts, camera shake, fixing the intro, object...

Newly revamped website which we'll be keeping up to date with progress. A demo in late January, to help with the planned Kickstarter. Some new screenshots...

Ever wondered what an 80's style arcade SHUMP would be like if it were turn based? Well, our 2D Turn Based Tactical SHMUP is now on Greenlight and looking...

We're beavering away on setting up our Steam Greenlight and Kickstarter.

Hi will Mighty Tactical Shooter be able to run on a IPod Touch 3gn?

Sorry for the slow reply. IndieDB doesn't alert me to new messages.

I don't yet know if it'll work on an IPod Touch 3gn - I haven't got to the stage of optimising for mobile yet. After the desktop release I'll most likely do Tablets next. And if that goes ok, then onto mobile.

The game is written in Unity - how well do other Unity games work on your iPod Touch 3gn?

I can to give you an answer. Unity games don't work fine because iPod Touch 3G don't have enough RAM. The only one is the iPod Touch 5, because it's the same spec than iPhone 4S .

That game looks fun !
One suggestion : to have a better view of time in trajectories, dots could change color depending on how far in time they are.
You know that your missile will intercept an ennemy when both trajectories share the same color where they meet each other.

Good idea. How do I know? Coz it's on my list of things to try out on the Alpha testers! :D

I'm a little concerned that the extra colours (or shading) will make things look too messy. So I was thinking I may just put a discrete little icon at the crossing point if it thinks they'll hit.

I'm looking forward to exploring it, but until the Demo and Kickstarter are sorted out it'll have to wait on the TODO list.

When are you planning to start your Kickstarter? I run a small indie gaming blog, would definitely do an article and spread the word on Reddit and NeoGAF
Indiegameenthusiast.blogspot.com

Hi, thanks for the kind words! I hope to get the Kickstarter off the ground before mid October.

Without community coverage indie games would have a tough time getting the word out, so your offer of more coverage is music to my ears! Thank you. If you have any questions for the article then ping them to me on twitter @TheMightyGit

I love the tactical interface, looks very intuitive and visually cool. I'll probably wait for the Kickstarter to go live before posting anything so I can have the campaign link in my post about the game. Hope you're doing well on Greenlight and yeah I'm already following both your Twitter accounts :)